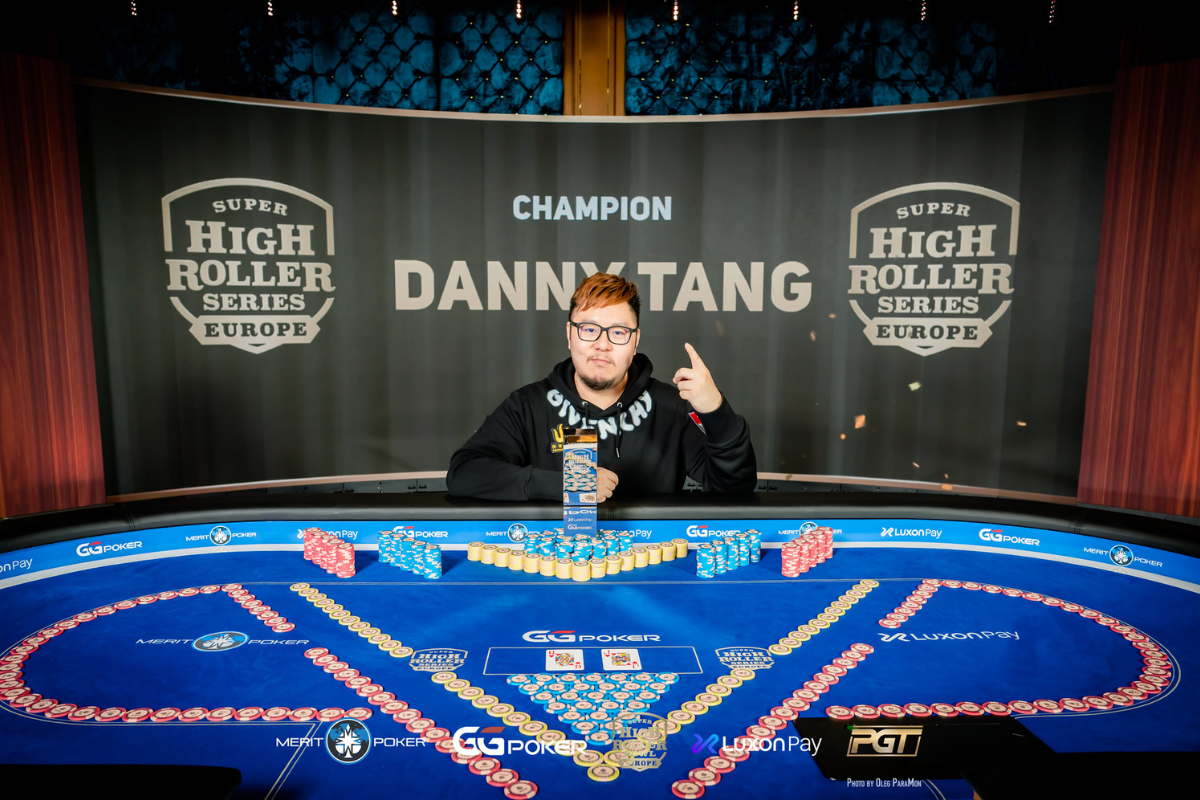 Tang considers himself a bit of a short deck hold’em expert, and said that he’s been focusing much of his time on the game.

Super High Roller Series Europe Event #5 took place at Merit Royal Hotel Casino & Spa in North Cyprus. The final table was live-streamed on PokerGO’s YouTube channel. The tournament had a $50,000 buy-in and drew 32 entries, generating a prize pool of $1,600,000. The top five finishes reached the money, with all players to cash earning PGT leaderboard points in addition to their cash prize.

Day 2 of the event saw five players return to action, with all of them in the money and guaranteed $112,000. Tang had quite a large chip lead, as he was returning to play with more chips than his four opponents had combined. Tang was able to ride that chip lead to victory.

First to bust was Paul Phua, and he was eliminated by Lun Loon in fifth place. Phua’s ace-jack of hearts couldn’t beat Loon’s pocket queens. Phua picked up $112,000.

Next to go was Seth Davies in fourth place, and he was ousted by Tang when his queen-jack lost to Tang’s ace-nine of diamonds. Davies cashed for $176,000.

Jason Koon was next out, also hitting the rail at the hands of Tang. Koon got all in with pocket sevens on a queen-jack-seven flop and was up against Tang’s pocket aces. The flop had two clubs and Tang had the ace of clubs. The river was an ace to give Tang a higher set and eliminate Koon. Koon cashed for $256,000.

Heads-up play began with Tang holding about a 3-1 chip lead over Loon and the two played for around an hour before Tang got the victory.

On the final hand, Tang’s queen-jack of hearts went to battle against Loon’s ace-king of diamonds. The flop was king-nine-seven and a ten on the turn gave Tang a straight. The river was a six to officially seal the deal for Tang and give him a $640,000 victory. Loon picked up $416,000 for his second-place finish.

Danny Tang is now third on the Super High Roller Series Europe leaderboard with 844 points. He has one victory and three cashes across the joint Triton Poker Cyprus and Super High Roller Series Europe festival. It remains Phil Ivey in the lead in a big way with 1,725 points, and then Jason Koon climbed into second place with his third-place finish in this event, sitting on 854 points now.