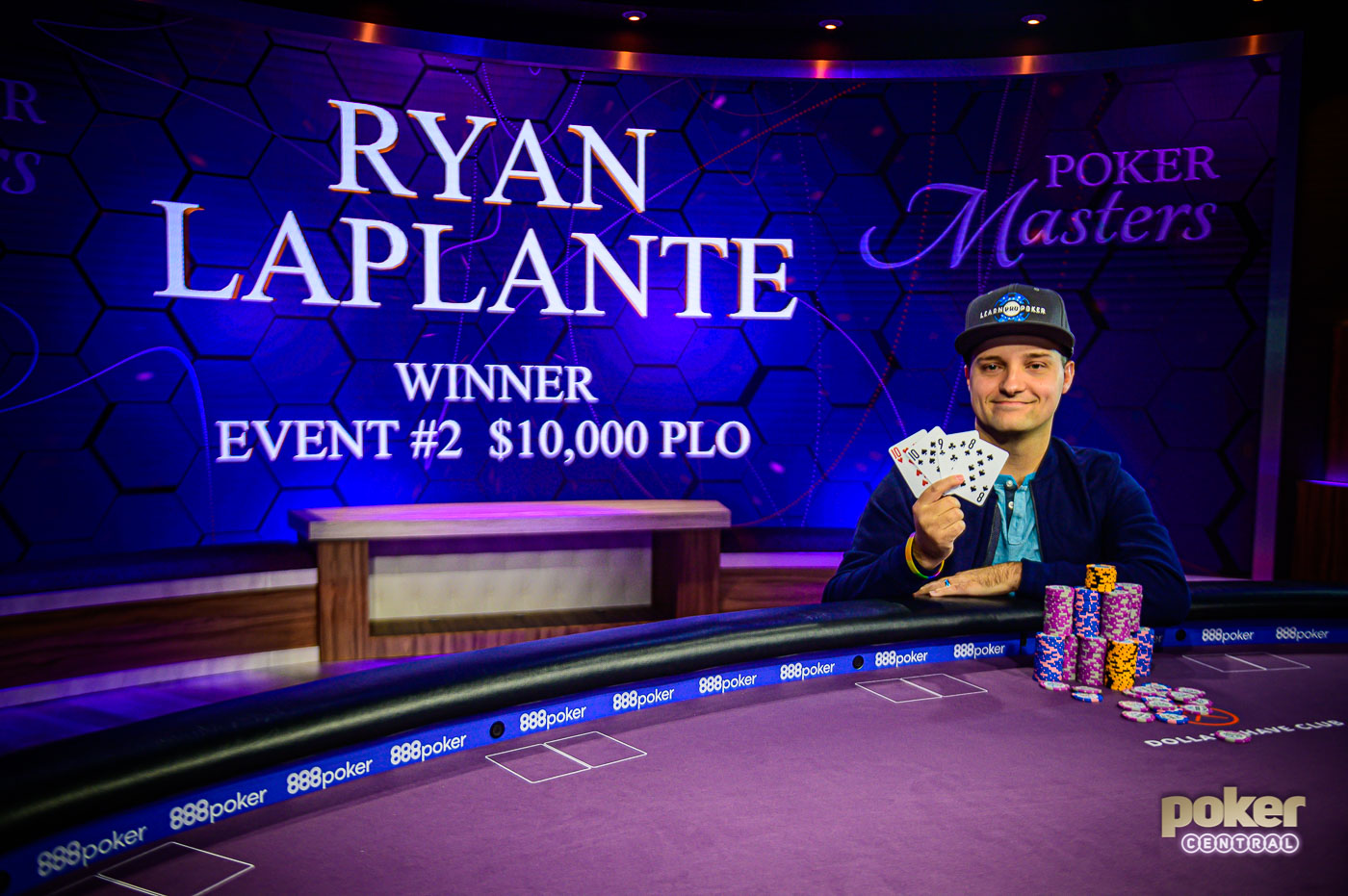 Ryan Laplante after winning Event #2 of the Poker Masters.

Ryan Laplante was at a loss for words after he took down the 2019 Poker Masters $10,000 Pot Limit Omaha event today. The long-time poker pro battled his way through a tough field of 62 entries that culminated with him beating the Event #1 runner up, Chance Kornuth, heads up. Laplante collected $186,000 for his win, the second biggest outright win of his career behind only his World Series of Poker bracelet win back in 2016.

Choking back tears, Laplante said, “Being able to play against these people, just even being able to compete, not even cashing, and then winning it is just absolutely absurd. Obviously, I thought it was possible when I signed up but when you’re playing against players of this caliber, and you pull through, it makes me feel very fortunate and very lucky.”

How the Action Unfolded

The final table started with six hopefuls lead by Ryan Laplante who held a commanding chip lead which he managed to carry all the way into heads-up play. Tim McDermott started as the short stack and he was the first player to get eliminated despite finding a quick double up at first. McDermott ended up all in with

and he was up against John Riordan’s

to send him to the rail.

Defending Poker Masters champion Ali Imsirovic was the next player to bust as aces were very unkind to him. Imsirovic nearly got all of his chips all in before the flop against Ryan Laplante who flopped the nut flush before the rest of the chips went in. Imsirovic did not catch runner-runner and headed for the exit in fifth place.

. The turn brought the

to send Riordan to the rail as Laplante made a straight. The action was reduced to heads-up play after Thai Ha busted in third place. Ha ended up all in with

sealed it as the eventual winner hit his flush.

. The chips went into the middle on a

as Kornuth flopped trips against Laplante’s full house. The turn and river brought no help as Kornuth finished second in back-to-back events while Laplante grabbed his first Poker Masters win.

About winning this tournament, that had a fast-paced structure on top of it being Pot Limit Omaha, Laplante was both realistic and excited.

“This tournament series as a whole is obviously very tough, playing against some of the best players in the world. The structure, however, is built to be pretty fast and especially in a game like PLO it’s a real battle and you’re constantly going for it. I tried my best to get into good situations and make thin bluffs, but honestly, I just ran really well and that’s required to win any tournament.”

About his experience at the PokerGO Studio and playing against tough fields in this setting, Laplante was over the moon.

“This event is made for degens and it’s just so much fun. The entire layout, the way players are treated, everything about it is just amazing. This is an elite series. I love to compete, I was willing to play it so that means I thought I could do well. Thinking that means I thought I had a small edge, not that I would actually have a great series, and winning the second event is just such an incredible experience, it’s pretty amazing.”

Looking ahead at potentially grabbing the Purple Jacket, Laplante was conservative with regards to allowing himself to dream about adding an epic title to his poker resume.

Tune in for more coverage on PokerGO at 1:00 pm PT/4:00 pm ET tomorrow as the final table of the Short Deck event is next up. Live Reporting of the $10,000 8-Game Day 1 starts on Poker Central at noon PT.