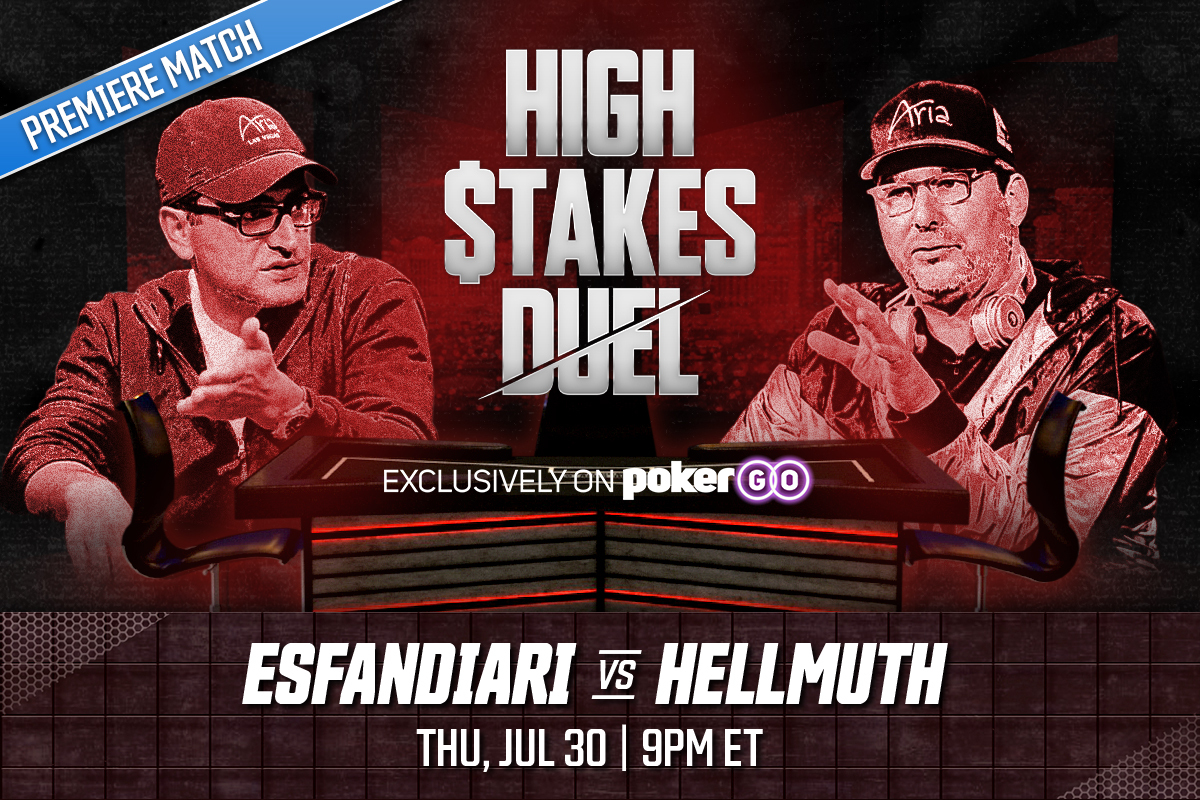 PokerGO Presents High Stakes Duel as Phil Hellmuth and Antonio Esfandiari square off in Round 1.

PokerGO®, Poker Central’s direct-to-consumer OTT subscription video service, today announced “High Stakes Duel,” its newest original series with a tournament format that has never been seen before in the poker world. The first episode of the series will feature a heads-up match between poker stars Antonio Esfandiari and Phil Hellmuth and will premiere live from the PokerGO® Studio at ARIA Resort & Casino on July 30th at 9pm ET/6pm PT.

The first round of “High Stakes Duel” has a $50,000 buy-in with the winner advancing to Round 2 of the battle. The loser in each round receives the option to challenge the victor for a rematch prior to the next round of the game being offered to any player willing to put up the money required. The stakes will double with each round, resulting in a potential total prize pool of $12,800,000 in Round 8. In order for a player to walk away victorious, they must win 3 straight matches before Round 6 or 2 in a row from Round 5 onward.  If there are no challengers within 30 days of the previous match, the most recent winner also walks away victorious.

“This series is different than anything we’ve created before in poker,” said Mori Eskandani, Executive Producer at Poker Central. “If you’re a fan of the game, you definitely don’t want to miss this. The stakes and rivalries will be on another level.”

“We’re constantly looking to create new formats and experiences in the game that will excite and entertain viewers,” said J.R. McCabe, Chief Business Officer of Poker Central. “With millions of dollars in prospective prize money, this series has the potential to be the highest stakes poker match ever to be shown on TV.”

The debut episode of “High Stakes Duel” will highlight a compelling and competitive match-up between notable poker stars Antonio Esfandiari and Phil Hellmuth, who have had a decade-long rivalry in the game, live from the PokerGO® Studio at ARIA Resort & Casino in Las Vegas. Phil Hellmuth is a record holder with 15 World Series of Poker gold bracelet wins, $23.4 million in career tournament earnings, and a 1989 WSOP Main Event winner. Antonio Esfandiari has won the first ever million-dollar poker tournament, the 2012 Big One for One Drop for $18.3 million, two World Poker Tour titles and a total of three WSOP gold bracelets.

“For 10 years I’ve been challenging Phil to a heads-up match where the winner shoots the loser with a taser gun – so going head-to-head in ‘High Stakes Duel’ has been a long time coming,” said poker star Antonio Esfandiari. “The idea that the winner has to go double-or-nothing at least two more times after the first match is brilliant; it will be interesting to see who will go for the challenge and who will turn it down when it gets to a certain point.”

“Antonio and I have a long history of playing poker together,” said Phil Hellmuth, who’s known as ‘The Poker Brat.’ “From the time he came to my house as a young man and insisted we play heads up (he won), to the time we played televised cash games together (he won), to the NBC Heads Up Championship in 2005 – I won it all. Looking forward to this battle!”

“High Stakes Duel” will be the latest original tournament series available exclusively on PokerGO®. From expert commentary on the game in “The Championship Run” and “Run It Back With Remko,” to behind-the-scenes interviews on “Hand Histories,” “Stories from the Felt” and more, PokerGO®’s originals provide unmatched access to the world of poker.