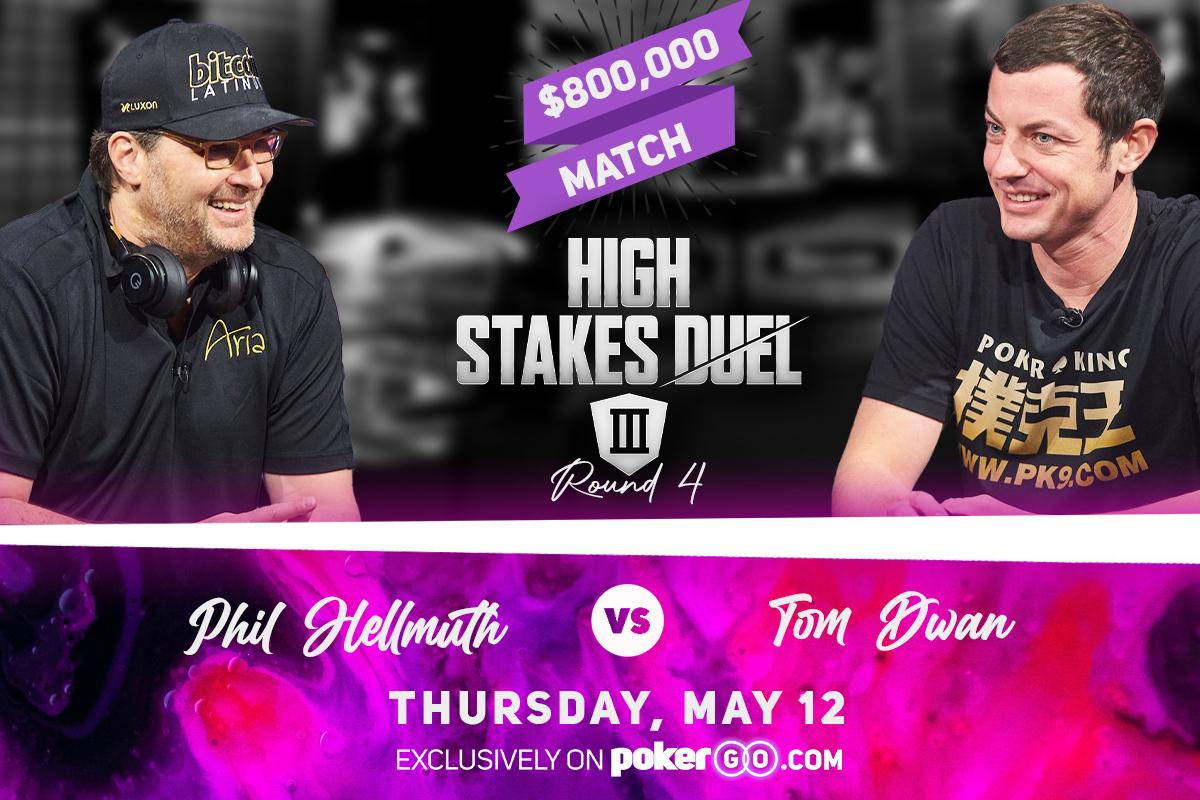 LAS VEGAS, NV (April 26, 2022) — The High Stakes Duel stakes are doubling once again, as the competition moves into uncharted waters. On Thursday, May 12, 2022, Phil Hellmuth and Tom Dwan return to the PokerGO Studio in Las Vegas to battle for $800,000. It is the first time High Stakes Duel will be played at such stakes.

The full match will be broadcast exclusively on PokerGO.com on Thursday, May 12, at 8 p.m. ET (5 p.m. PT). New PokerGO subscribers can receive $20 off an annual PokerGO.com subscription by using the code “HSD3R4” at sign-up. The first hour of the match will be available for free on the PokerGO YouTube channel.

Per the rules of PokerGO’s High Stakes Duel, the stakes double with each round with the ultimate potential of an eighth round being played for $12,800,000 in prize money. A player can walk away victorious if they win three consecutive matches before Round 4 or two consecutive matches starting with Round 4.

Get ready for the third installment of @TomDwan vs @Phil_Hellmuth on High Stakes Duel but this time there's $800,000 at stake! Who will win this one?

Watch it unfold live on May 12th, only on PokerGO. pic.twitter.com/3HSgFej9Ns

Round 4 of High Stakes Duel III between Hellmuth and Dwan airs on PokerGO.com on Thursday, May 12, 2022, at 8 p.m. ET (5 p.m. PT). New subscribers can receive $20 off an annual PokerGO.com subscription by using the code “HSD3R4” at sign-up. The first hour of the match will be available for free on PokerGO’s YouTube channel at youtube.com/PokerGO.

About PokerGO®
PokerGO® is the world’s largest poker content company delivering poker’s most premier live events around the world to consumers. The platform delivers more than 100 days of live poker on an annual basis, streaming PokerGO® owned and operated tournaments such as the Super High Roller Bowl, Poker Masters, U.S. Poker Open, and PokerGO Cup, along with select World Series of Poker final tables and more. PokerGO’s video-on-demand library includes original content that provides unmatched access to the world of poker, including “High Stakes Poker” and “High Stakes Duel.” PokerGO curates programming that spans from expert commentary on the game to tales of iconic moments in poker history, to behind-the-scenes interviews with notable poker stars and more. For more information, please visit http://www.pokergo.com/. Become a part of the PokerGO community on Twitter, Facebook, Instagram, TikTok, YouTube, and Discord.