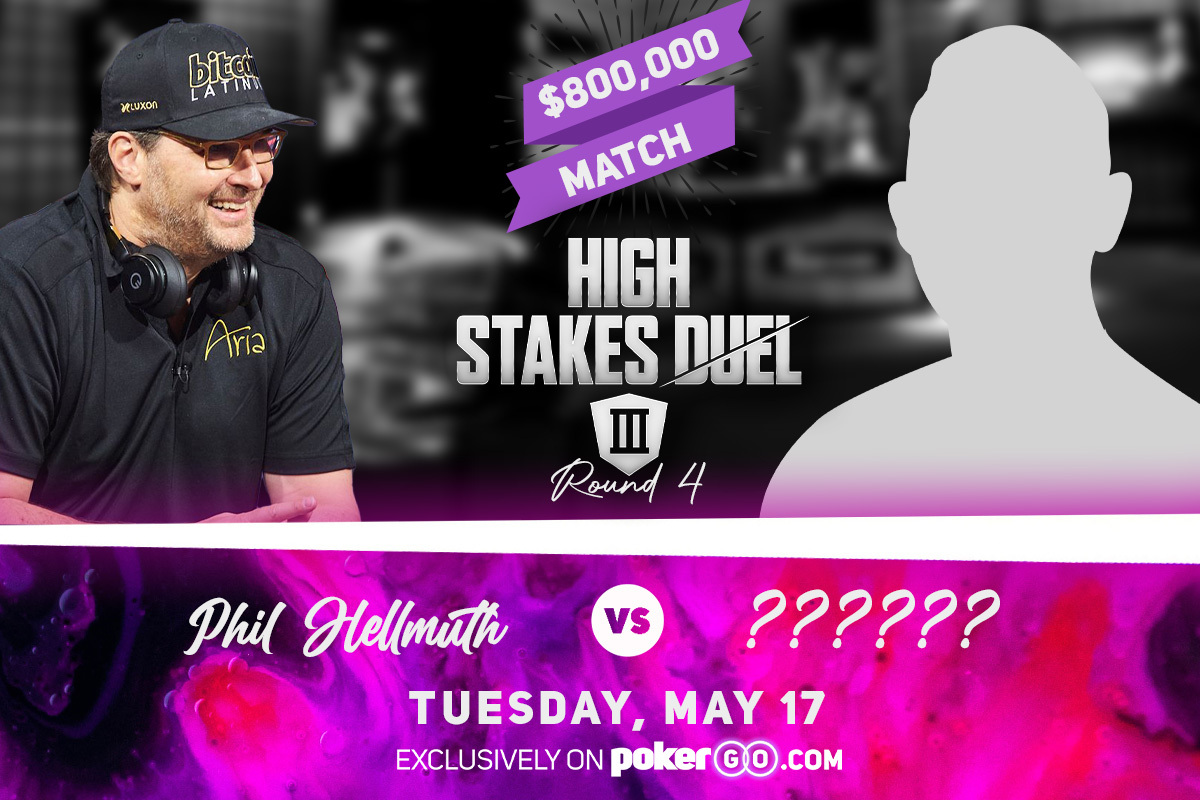 The scheduled match between Phil Hellmuth and Tom Dwan for $800,000 has been canceled following Dwan’s withdrawal due to a schedule conflict. Round 4 of High Stakes Duel III will continue next week with Hellmuth set to face a new opponent in the $800,000 match.

The full match will be broadcast exclusively on PokerGO.com on Tuesday, May 17, at 8 p.m. ET (5 p.m. PT). New PokerGO subscribers can receive $20 off an annual PokerGO.com subscription by using the code “HSD3R4” at sign-up. The first hour of the match will be available for free on the PokerGO YouTube channel.

Who Will Be Hellmuth’s Next Opponent?

Is that Eric Persson‘s music? Persson has been a breakout star on this season of High Stakes Poker, but prior to that during the PGT Heads-Up Showdown, Persson and Hellmuth squared off in the Round of 32. Both players threw a plethora of verbal exchanges at each other during an extremely heated match where Persson emerged victorious over The Poker Brat.

Antonio Esfandiari and Daniel Negreanu were both swept in three consecutive matches by Hellmuth in High Stakes Duel I and II respectively, and maybe now is the time they’ll seek revenge. Both Esfandiari and Negreanu love playing for high stakes, and what is bigger than this $800,000 match? Both would love getting some High Stakes Duel revenge where there is $800,000 on the line.

Texas is a short flight from Nevada, and Doug Polk isn’t one to back away from a heads-up battle. Could Polk be the one taking the seat across from Hellmuth in Round 4 of High Stakes Duel III? Polk battled Negreanu on High Stakes Feud where he won over $1.2 million after 25,000 hands of heads-up No-Limit Hold’em on WSOP.com. Those 25,000 hands were played throughout 36 sessions, but Polk could take just one session to take on Hellmuth if he wants to try and win this $800,000 High Stakes Duel III match.

There was some controversy recently involving Hellmuth against some YouTube / Twitch content creators such as Ninja, MrBeast, and Ludwig. Could one of these content creators look to continue their rush of success playing poker and take a seat across from Hellmuth in a one-on-one setting? Both MrBeast and Ludwig were big winners in the game, and could easily look to parlay those winnings into a shot at Hellmuth for the High Stakes Duel III title.

$1.6 Million Match on the Schedule

Unless no opponent steps up in Round 4 or 5, there will be a match for $1.6 million sometime in the future of High Stakes Duel III – one of the biggest heads-up matches in the history of televised poker!

Round 4 of High Stakes Duel III between Hellmuth and his next opponent airs on PokerGO.com on Tuesday, May 17, 2022, at 8 p.m. ET (5 p.m. PT). New subscribers can receive $20 off an annual PokerGO.com subscription by using the code “HSD3R4” at sign-up. The first hour of the match will be available for free on PokerGO’s YouTube channel at youtube.com/PokerGO.