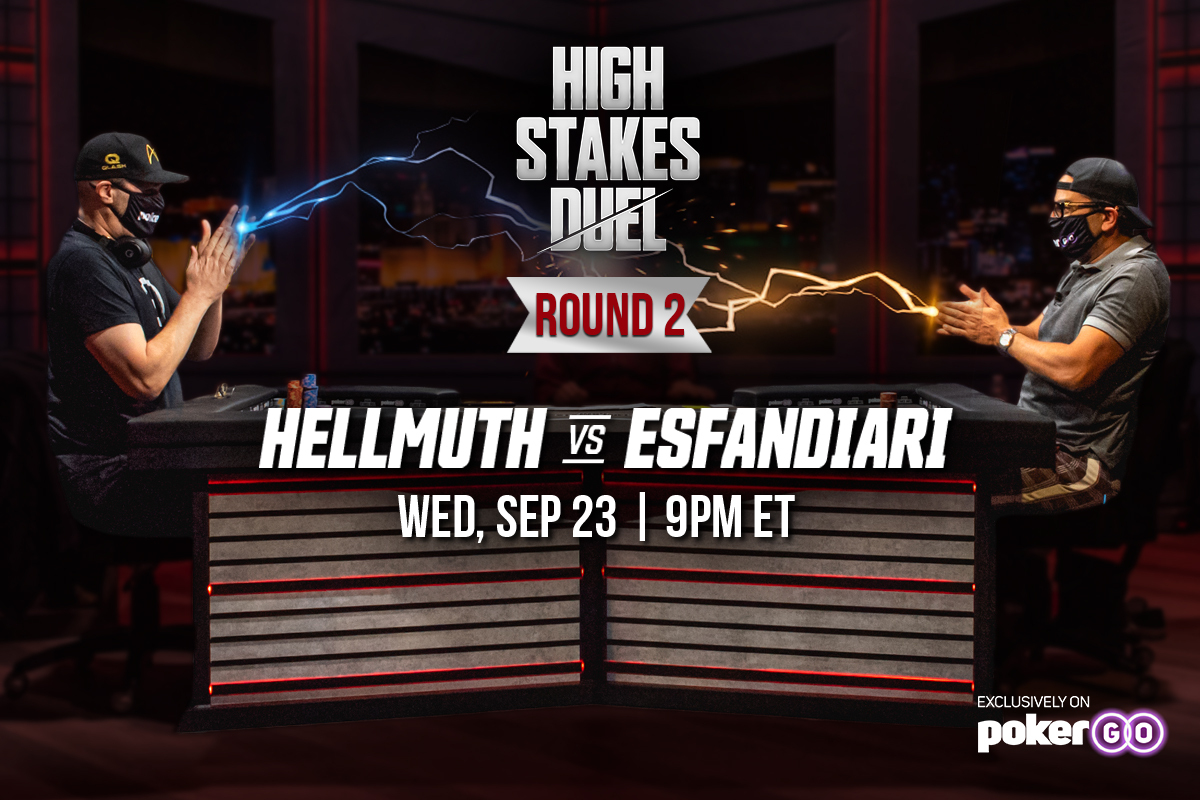 Before a hand was dealt in High Stakes Duel, Antonio Esfandiari had the intention to challenge Phil Hellmuth if he lost. When the final played out that saw Esfandiari lose a race to Hellmuth’s pocket pair, he immediately declared a challenge to play Hellmuth in Round 2.

And it’s all going down on Wednesday, September 23, at 9 p.m. ET on PokerGO with High Stakes Duel Round 2!

The premiere of High Stakes Duel saw Hellmuth and Esfandiari play a $100,000 heads-up match from inside the PokerGO Studio. Hellmuth would be victorious over Esfandiari and progress through to Round 2. When Esfandiari immediately challenged, Round 2 would be set between The Poker Brat and The Magician – with the stakes doubling to $200,000.

“He and I are both titans,” Hellmuth said after defeating Esfandiari in Round 1. “We’re warriors. We’re just going to keep battling.”

Although the two were set for a rematch, Hellmuth headed to Mexico to chase WSOP glory on GGPoker as WSOP Online was in full swing. Although Hellmuth couldn’t add to his collection of 15 WSOP bracelets, he collected cashes on both WSOP.com and GGPoker and still holds the lead for all-time WSOP cashes ahead of Daniel Negreanu, Chris Ferguson, Roland Israelashvili, and Erik Seidel.

The High Stakes Duel bragging rights currently belong to Hellmuth, but Esfandiari can’t be counted out. The winningest player in WSOP history has the skills on the felt, and also the speech games to give Hellmuth a run for his money in Round 2 as the tale of the tape falls as follows:

The only statistic that matters heading into Round 2 is who holds the lead in High Stakes Duel victories – and that belongs to Hellmuth.

“I’m the most hungry poker player on the planet,” Hellmuth said on High Stakes Duel | Round 1 | The Weigh-In. “I keep winning and I don’t get the respect.”

If Esfandiari loses again, will he immediately challenge? If Hellmuth takes the loss, will he be willing to put up the $200,000 to take his seat in Round 3? The only way to find out is to watch High Stakes Duel for free and exclusively on PokerGO on Wednesday, September 23, at 9 p.m. ET.