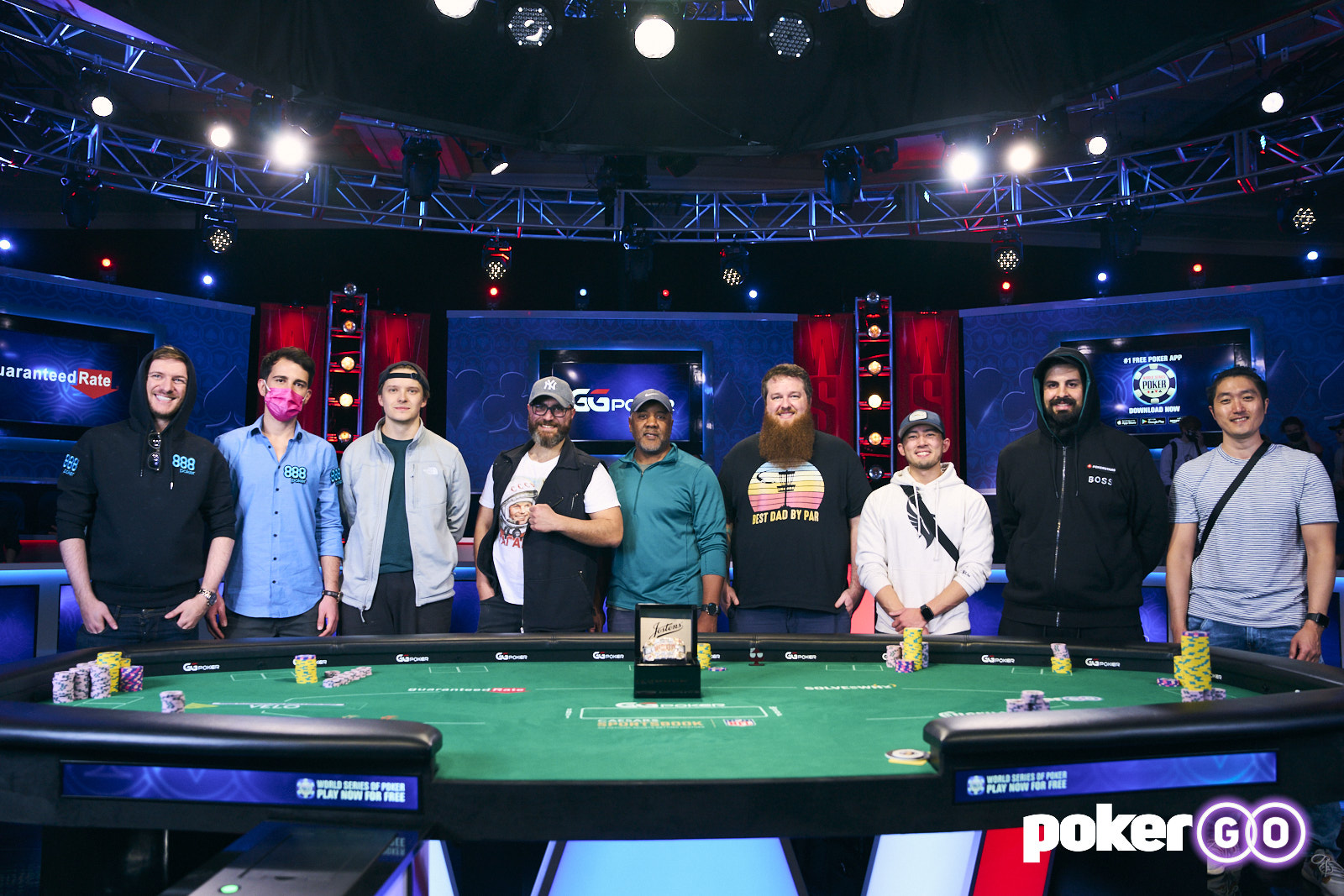 The final table of the 2021 World Series of Poker Main Event is set. The field of 6,650 entries has just nine players remaining. Each player is guaranteed a $1 million payday with a whopping $8 million up top. Let’s take a look at the players to reach the 2021 WSOP Main Event final table.

The first seat at the table belongs to Jareth East. He’s 31 years old and calls the United Kingdom home. East lists his professional as poker and enjoys cryptocurrency, music, raves, drumming, and gaming as hobbies. His largest tournament score ahead of this WSOP Main Event was a $557,658 victory in a WPTDeepStacks online event on partypoker. He started playing poker when a college buddy taught him the game and helped influence his start in poker. East went on to drop out of college to play full-time and hasn’t looked back since.

Koray Aldemir is a big chip leader entering the final table. He’s in Seat 2 and has 175 big blinds to start, which accounts for 35% of the chips in play. Like East, Aldemir is 31 years old. Aldemir is German and resides in Austria. He lists his profession as being a student. With more than $12.3 million in live tournament earnings entering this WSOP Main Event, Aldemir is certainly the most experienced and successful player remaining. He said that he first played poker on New Year’s Eve in 2006 and then starting playing freerolls online on PokerStars when he turned 18, playing in the Hubble Freeroll.

At 26 years old, Jack Oliver is the youngest player at this final table. He’s from the U.K. and enjoys soccer and hiking. His previous best live tournament score was for $27,047 from an event at the Venetian. Oliver listed his greatest accomplishment as running a marathon, but it wasn’t just any marathon. He ran the marathon for charity in honor of his mother. Oliver ran for a breast cancer charity after his mother passed away from breast cancer when he was a child. He said he recalls watching the WSOP Main Event when he was 17. “It was insane, and here we are now.”

Ozgur Secilmis is 37 years old from Istanbul, Turkey. He’s been fun-loving throughout the 2021 WSOP Main Event, often seen dancing at the table or playing up moments with his boisterous rail. Secilmis won a huge hand earlier when he made quads over quads. Secilmis said that he got into poker because a childhood friend forced him to start playing online. At first he didn’t want to, but he did, and now look at where he’s made it to. If he wins, he would like to use the money to play higher stakes and put his skills to the test.

George Holmes is the oldest player to reach the final table, coming in at 49 years old. He’s from New Jersey but resides in Atlanta, Georgia. In 2019, Holmes placed 213th in the WSOP Main Event for $50,855. That’s his only live tournament cash on record. Holmes said that his first run has helped him this time around because he’s less intimidated. He works in credit card processing and payments and got started playing poker by playing weekly home games.

Chase Bianchi came into this WSOP Main Event with $872,718 in live tournament earnings. He won a gold bracelet at the WSOP in 2016, winning a $1,000 no-limit hold’em event for $316,920. He’s 34 years old, lives in Boston, Massachusetts, is married, and has two foster kids. His plans for the money are to support his family, buy a house, give to his church, and support a foster care organization. During this WSOP Main Event run, Bianchi has been reading good fiction books every night in order to get a good escape and to calm his mind.

Joshua Remitio only has $1,809 on his live tournament résumé, according to HendonMob.com, but he’s now a millionaire thanks to reaching the final table of the 2021 WSOP Main Event. Remitio is 27 years old and resides in Las Vegas, although he was born in Corona, California. He studied finance at Arizona State University and enjoys powerlifting, video gaming, and streaming. Remitio said he got started in poker while drunk at a college home game and has loved the game ever since.

Alejandro Lococo, or better known as “Papo MC,” is a 29-year-old rapper and content creator from Argentina. He brings to the final table a stack of 58.5 big blinds to start. Lococo has a girlfriend, Barbara, and three kinds – a boy and two girls. He listed his hobbies as eating and food and said he started playing poker when he was 14 years old. Lococo said that he’s been adhering to a secret routine during this WSOP Main Event run, but that he didn’t want to reveal what it was until after.

Hye Park rounds out the 2021 WSOP Main Event in Seat 9. He’s 38 years old and was born in Seoul, South Korea. Park now resides in Edgewater, New Jersey, with his wife and they’re expecting their first child in December. Park enjoys tennis, snowboarding, and MMA as hobbies. Park lists the United States Marine Corps as his greatest accomplishment and said that he began playing poker on a Navy ship when he was in the marines. He had more than $470,000 in live tournament earnings before this event.

For more on who made the 2021 WSOP Main Event final table, listen to the PokerGO Podcast.

The 2021 WSOP Main Event final table starts at 4 p.m. PT on Tuesday, November 16. PokerGO.com will have the live stream available starting at 5 p.m. PT. The plan is to play down to the final four players. Those four will then return on Wednesday, November 17, at 4 p.m. PT to play to a winner with the live stream once again happening on PokerGO starting at 5 p.m. PT.