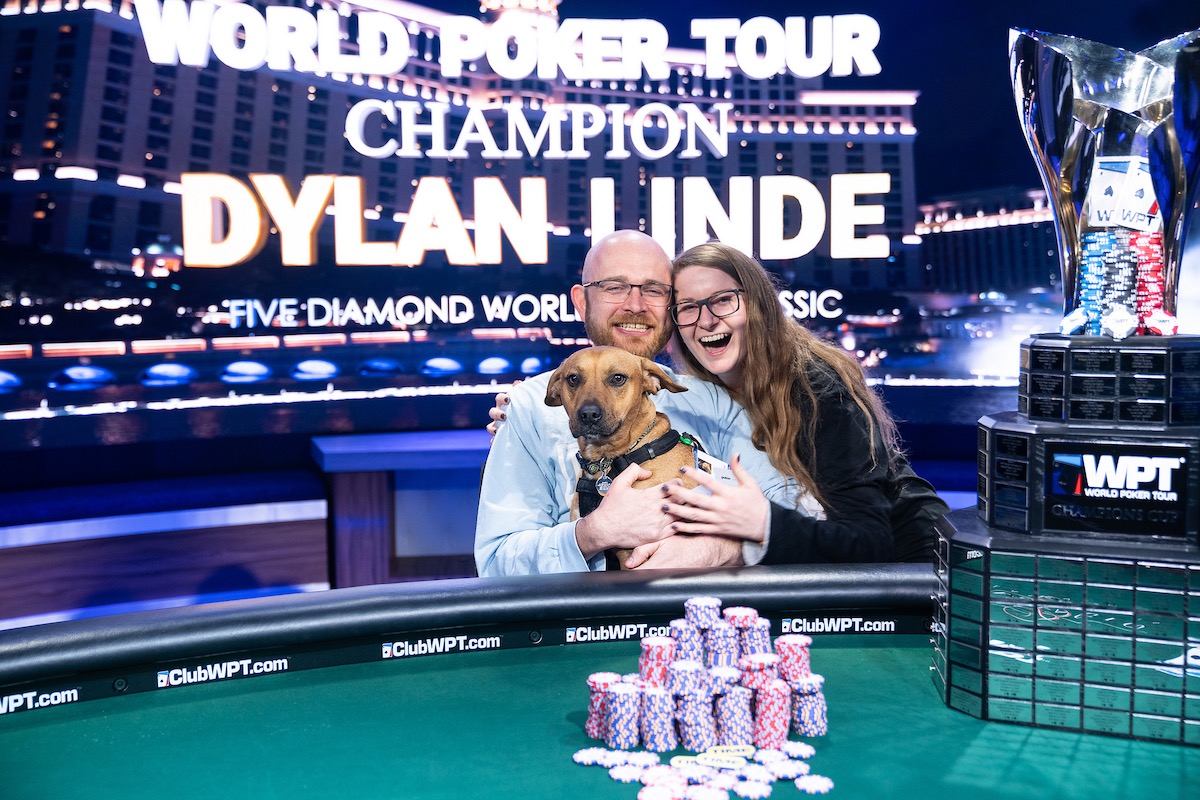 Dylan Linde with his girlfriend Alyssa and their dog River after he took down the biggest tournament of his career. (Photo courtesy of the WPT.)

He’s one of the most beloved and well-respected on the international tournament scene both live and online, and tonight he finally managed to get the monkey of his back. Dylan Linde won the World Poker Tour Five Diamond Poker Classic Main Event beating a field of 1,001 entries to capture the first prize of $1.6 million.

“This doesn’t feel real,” Linde sighed after the final card hit the felt inside the PokerGO Studio on Saturday night.

“I’ve had so many opportunities in the past and there was a point in my career where it started to feel as if I was cursed, but then I started getting some good results and started turning it around.”

Linde indeed turned it around, putting in a dominant performance at the final table that lead to by far and away the biggest result of his career.

The final table started with six players, led by Milos Skrbic, and the first to get eliminated was Barry Hutter who took home $344,529 for his efforts. Hutter ended up all in with ace-eight on a six-eight-five board against the six-five of Milos Skrbic. Hutter couldn’t find a way to improve and Skrbic took the chip lead with 13,375,000 chips.

A little over an hour later Lisa Hamilton was the next player to get knocked out. Hamilton recorded by far her largest career tournament result by cashing for $451,880 after she ran pocket fives into the ace-ten of Dylan Linde. Both the flop and turn brought a ten for Linde who retook the chip lead from Skrbic.

Linde extended his chip lead when he busted Ping Liu in fourth place for $599,147. Lin called all in after Linde shoved showing jack-deuce suited. Liu was ahead with ace-four, but the board brought a deuce to send Liu to the rail.

By this point, Linde had a stranglehold on the tournament showing a lot of aggression to keep his opponents at bay. It took until the 100th hand of action for the next player to hit the rail as Andrew Lichtenberger took home $802,973 for his efforts. Lichtenberger ended up all in with king-five on a king-high flop versus the ten-six of clubs of Linde who had flopped a flush draw.

The heads-up battle started with 22.3 million chips for Linde versus 17.6 for Skrbic as both players had $1,087,603 locked up with $1,631,468 and the Baccarat Crystal WPT Tournament of Champions seat. Linde was dominant during heads-up play, leading to a Skrbic shove for just less than five million chips after about an hour of play. Skrbic showed fives against the jacks of Linde that held up without a hitch.

Here’s an overview of the final table payouts.