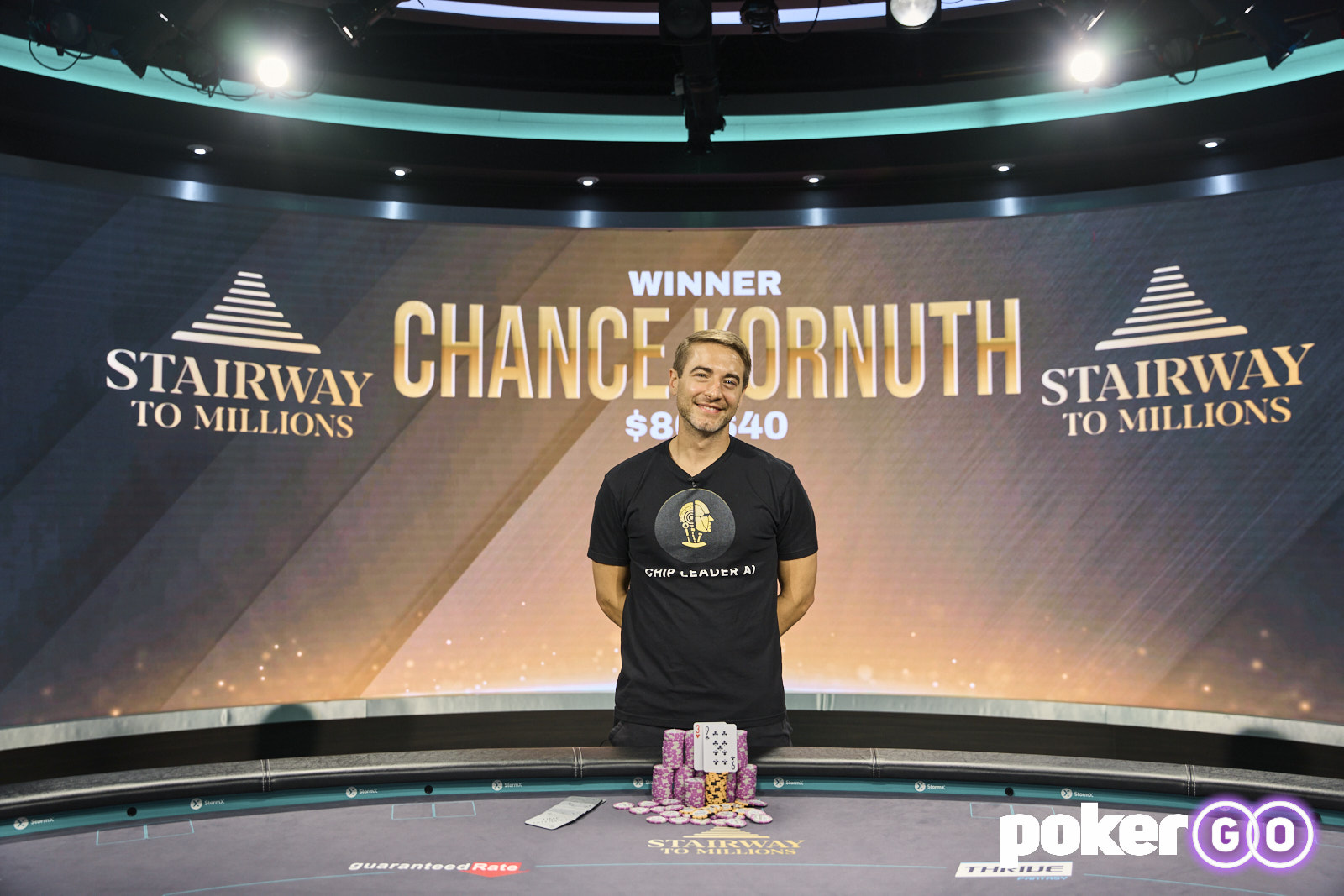 Chance Kornuth can do no wrong at the 2022 Stairway To Millions. After winning the second event of the series on Friday, Kornuth returned to the winner’s circle a day later when he won Event #3: $4,200 NL Hold’em for $80,640. Kornuth has now cashed in all three Stairway To Millions tournaments, winning two of them, and has successfully stepped his way into the fourth tournament.

“It feels great,” Kornuth said. “I ran even better in this one than I did in the last one. It was pretty incredible. I max late-registered and immediately had chips to play with, and it was smooth sailing the entire way.”

Through the first three 2022 Stairway To Millions tournaments, Kornuth has cashed for $136,040 from three cashes and two victories. Each in-the-money finish came with a cash prize and a ticket to the next tournament, and cashing in Event #3 earned Kornuth a ticket to Event #4: $8,400 NL Hold’em.

“Historically, I have an issue with it, the winner’s tilt, if you will, where I’ll play really bad in the next thing,” Kornuth said when asked about keeping grounded and not letting the success go to his head. “Taking a few minutes to get your mind right and making sure you’re not trying to win too many pots is imperative to doing well in the next one.”

Following his win in Event #2 for $51,600, Kornuth hopped into Event #3 and immediately started to gather chips. He doubled through Jesse Lonis a couple of times before clashing in a big pot with Justin Saliba that saw his stack increase to more than 800,000 in chips. After that, Kornuth busted Ilyas Muradi and then he knocked out Michael Lang.

After Jaime Cervantes was eliminated as the “bubble boy” for the second event in a row, the final 12 players were in the money. Once in the money, Kornuth eliminated Jeremy Ausmus in 11th place on his way to the final table. When the final nine players took their seat at a single table, Kornuth was the chip leader.

Things started off going in the wrong direction with Mitchell Halverson doubling through Kornuth with nine players left, but then he knocked out Joelle Weinand in ninth place and Philip Shing in eighth place. Eventually, Victoria Livschitz was eliminated by Nathan Zimnik in seventh place to end play for the day and lock in Kornuth as the chip leader heading to Day 2.

First to bust at the final table was Lonis. He was eliminated in sixth place when Kornuth’s ace-nine of hearts held up against Lonis’ ace-three. Then it was Daniel Weinand that Kornuth took out in fifth place, this time doing it with pocket aces against Weinand’s pocket eights.

As if Kornuth’s day couldn’t go any better, he put Mitchell Halverson all in with top pair, top kicker on the river of a king-high board and Halverson made the call with third pair to become the fourth-place finisher. Then it was Nathan Zimnik running into the buzzsaw that was Kornuth. Zimnik three-bet shoved a ten-five-two flop with top pair and ran into Kornuth’s bottom two pair. No help came on the turn or river for Zimnik and he was out the door in third place.

In a limped pot, Kornuth, holding nine-three, checked a rainbow nine-four-two board. Cheong bet 100,000 with jack-four. Kornuth called to see an eight come on the turn and checked to Cheong again. Cheong fired 400,000 this time and Kornuth came along to see the river. Fifth street was another nine to pair the board and give Kornuth trips. Kornuth checked and Cheong moved all in for 1,380,000. Kornuth quickly called to give Cheong the bad news. With that, Kornuth was back in the Stairway To Millions winner’s circle, with Cheong taking second for $51,120.

“I’m optimistic to see what happens,” Kornuth said. “Today is the $8,400 event and it would be great to cash that one and continue the stairway to a million.”