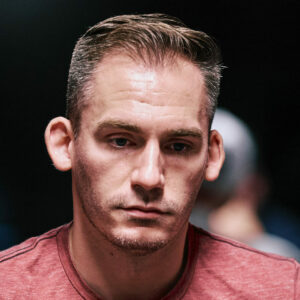 At just 33 years old, it’s fair to wonder what more Justin Bonomo could possibly accomplish at the poker table.

In 2018, Bonomo notched five seven-digit tournament cashes during a streak unlike anything seen in poker history. (Actually, he had four seven-digit cashes and one eight-digit cash.)

He kicked off the year with a 2nd place finish in the PokerStars Caribbean Adventure (PCA) Super High Roller for a $1,077,800 cash. Before January was over, Bonomo would notch two more top five finishes and a first place finish, totaling over $1 million. Bonomo’s year was so good that by the end, his January was just a footnote.

In February, he won the inaugural tournament of the U.S. Poker Open. The next month he won the Super High Roller Bowl in Macau – a $4.8 million score. But all those wins and all that cash still didn’t tell the story.

But Justin Bonomo goes deeper than the materiality of quick scores and deep runs. A quick scroll of his Twitter account and you’ll find his thoughts on government, animal rights, and polyamory. He has won more money playing poker than any other human being ever has, but at the table, earphones in place, he’d be able to blend in at any $1/$2 cash game.

Tim Duckworth - December 15, 2021 The Five Diamond World Poker Classic has been a part of Bellagio poker history since the inaugural season of the World Poker Tour back in 2002 when Gus Hansen topped John Juanda to win the first-ever WPT Main Tour title. The WPT Main Event kicked off today at Bellagio Resort & Casino in Las Vegas,…

PokerGO WSOP Podcast: Jacobson and Bonomo’s Main Event Story, Plus Arieh Gets No. 4

Remko Rinkema - November 6, 2021 Martin Jacobson and Justin Bonomo join the show at the end of their WSOP Main Event Day 1b and recap the action. The former WSOP Main Event champ started the day very slowly while Bonomo got his socks bluffed off in an epic hand. While the Main Event slowly moved towards Day 2, Josh Arieh…

Remko Rinkema - October 25, 2021 Remko and Donnie are back together to break down Michael Addamo’s $50K High Roller win, Josh Arieh’s first bracelet win in 6,000 days, and Kevin Gerhart’s dominant performance in the $10,000 H.O.R.S.E. In addition to the recaps, the boys also dive into some troubled travel stories, the faster WSOP structures, and a special invite to…

Tim Duckworth - October 21, 2021 The high roller circuit has been dominated by Michael Addamo since September as the Australian won two events at the Poker Masters along with the $300,000 buy-in Super High Roller Bowl VI. His success inside the PokerGO Studio has now transitioned over to the 2021 World Series of Poker after he won his third WSOP…

Tim Duckworth - October 21, 2021 Michael Addamo continues to dominate the high roller scene here in Las Vegas as he holds a commanding chip lead entering the Event #38: $50,000 No-Limit Hold’em High Roller at the 2021 World Series of Poker. Finishing with 11,475,000 in chips, Addamo holds nearly half the chips in play ahead of Justin Bonomo, Erik Seidel,…
All Justin Bonomo articles...