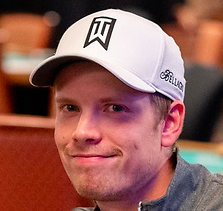 Joni Jouhkimainen is a Finnish professional poker player, known for his results online in the highest stakes PLO games, as well as his live tournament results. Jouhkimainen is fresh off two final tables at the 2020 Australian Poker Open, in both the A$10K PLO and A$25K PLO events. Outside of poker Jouhkimainen enjoys golf and hockey.

Remko Rinkema - April 16, 2020 The action on partypoker during the Poker Masters Online continues to be hot and heavy with two more big prize pools being contested last night! Finnish partypoker pro Joni Jouhkimainen took down Event #8 for $254,800 while Pascal Lefrancois won Event #9 for $243,988. By recording two cashes, finishing second and fifth on the night,…

Remko Rinkema - January 29, 2020 Colombia’s finest, Farid Jattin, put on a clinic today at the Event #4 $25,000 Pot Limit Omaha final table, taking care of business by knocking out all four of his opponents in under 90 minutes. Jattin collected $290,00 for his efforts and with that, he puts himself within striking distance of the Championship lead. The…

Tim Duckworth - January 28, 2020 The fourth event of the 2020 Australian Poker Open was Event #4: AU$25,000 Pot-Limit Omaha held from inside The Star Gold Coast poker room. It was the longest day of play so far during the Australian Poker Open as the event ticked into the 19th level, and once the dust settled and just five players…