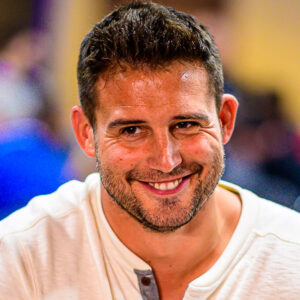 Originally from Erie, PA, Darren Elias is a professional poker player who currently holds the record for the most World Poker Tour Titles with four. Elias has notched over 133 cashes since 2008, and currently sits in 75th on the United States all time money list. Elias currently lives in Philadelphia, PA.

Donnie Peters - September 15, 2021 On Wednesday in Las Vegas, Chris Brewer topped a field of 57 entries to win Event #8: $25,000 No-Limit Hold’em at the 2021 Poker Masters for $427,500. In addition to the prize money, Brewer earned 257 points for the Poker Masters leaderboard, which vaulted him into second place overall in the race for the coveted…

Keegan McCann - September 15, 2021 Ap Louis Garza eliminated the final three players of the day and heads into the final table of five with over a one million chip lead against second-place Chris Brewer. Joining Brewer and Garza are John Riordan, Brock Wilson, and Darren Elias. Garza and Wilson cash for the third time, Riordan cashed for the fourth…

Donnie Peters - August 10, 2021 Joe McKeehen has a long list of poker accomplishments and he can now add the trophy from the 2021 Seminole Hard Rock Poker Open Event #39: $25,500 “The Big 4” High Roller to his collection. McKeehen topped a field of 91 entries to win the tournament’s $550,990 first-place prize. He entered the final table with…

Through the Lens: Best Photos from SHRB London!

Drew Amato - September 23, 2019 A little over a week ago we saw Cary Katz take home his biggest career score, after winning Super High Roller Bowl London. The $2.6 million score bumped Katz into the 18th spot on the all-time money list, solidifying his case as a future Poker Hall of Famer. Katz overcame one of the toughest fields…
All Darren Elias articles...
Top