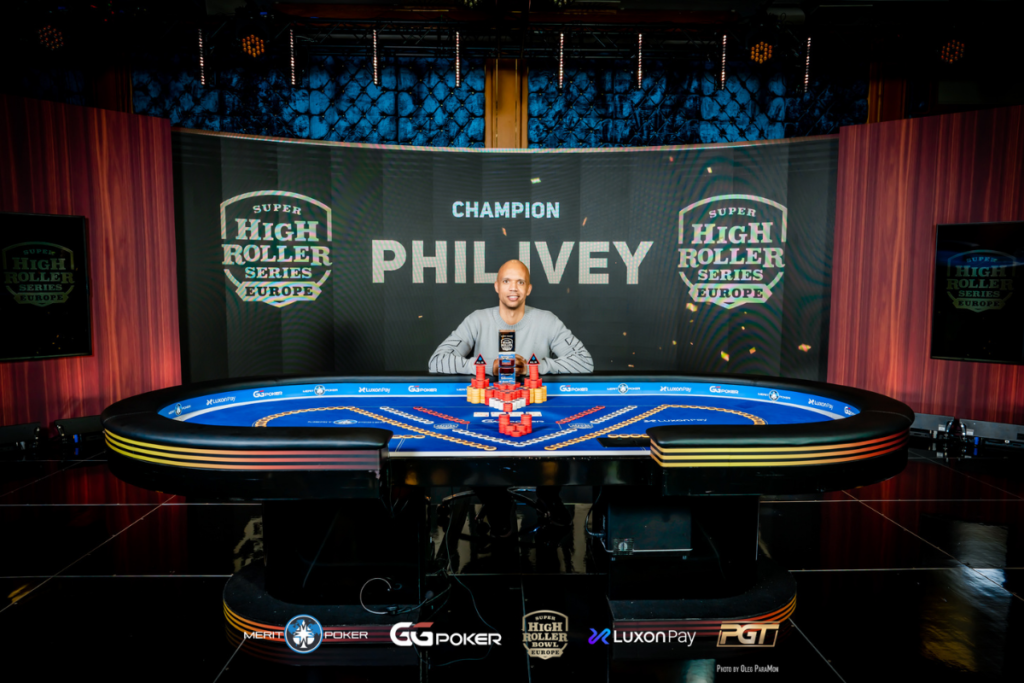 Across the joint series involving Triton Poker Cyprus and Super High Roller Series Europe that has been running at Merit Royal Hotel Casino & Spa in North Cyprus, Ivey has five cashes, and they’re all top-five appearances, and two victories.

Ivey has now won $2,880,100 from his recent performances in North Cyprus, where he is the current frontrunner on the series leaderboard with 1,725 points. Ivey added 384 points by winning Event #4.

“I feel much more present at the table,” Ivey said, talking about his current mindset and work-life balance. “It definitely has helped my game. In my 20s and 30s, I played so much all the time. It was just poker, poker, poker. There was no balance and I ended up, let’s say, paying the price for that. So now I try to keep in mind what’s important and what’s not.”

Super High Roller Series Europe Event #4 took place at Merit Royal Hotel Casino & Spa in North Cyprus. The final table was live-streamed on PokerGO’s YouTube channel. The tournament had a $50,000 buy-in and drew 32 entries, generating a prize pool of $1,600,000. The top five finishes reached the money, with all players to cash earning PGT leaderboard points in addition to their cash prize.

Ivey’s Road To Victory in Event #4

Phil Ivey finished Day 1 of Event #4: $50,000 PLO in third chip position with seven players remaining. Only the top five finishers would make the money, meaning two players needed to go home before the field was in the money. First to bust on Monday was Tomas Ribeiro, falling in seventh place. Then it was Iakov Onuchin hitting the rail in sixth place to become the tournament’s “bubble boy.”

In the money, pot-limit Omaha wizard Dylan Weisman went out first. He was all in on the jack-nine-seven flop with ace-queen-eight-three against the king-queen-ten-four for Ivey. The turn was a four to give Ivey the lead. The river was a six to send Weisman to the rail with a $112,000 payday.

Finland’s Eelis Parssinen was next to bust, going out at the hands of Ali Imsirovic and taking home a $176,000 prize. That set up three-handed play between Ivey, Imsirovic, and the other Finnish player to reach the final table, Joni Jouhkimainen.

Jouhkimainen fell next, also hitting the rail at the hands of Imsirovic, and that set up the heads-up match between Ivey and Imsirovic. Imsirovic began the final duel with the chip lead, having 2,705,000 to Ivey’s 2,095,000, but things quickly went in Ivey’s direction.

Although Imsirovic did manage to find a double up after getting very short, the mountain of Ivey was too steep to climb.

On the final hand, the money went in on the queen-jack-three flop. Ivey had ace-ace-eight-four against Imsirovic’s king-queen-six-two. A four on the turn followed by a seven on the river gave Ivey the $640,000 triumph.

Phil Ivey extended his lead atop the Super High Roller Series Europe leaderboard further with the victory in Event #4: $50,000 Pot-Limit Omaha. He’s now in first place with 1,725 points and is nearly 1,000 points clear of anyone else. Andras Nemeth is second with 738 points. 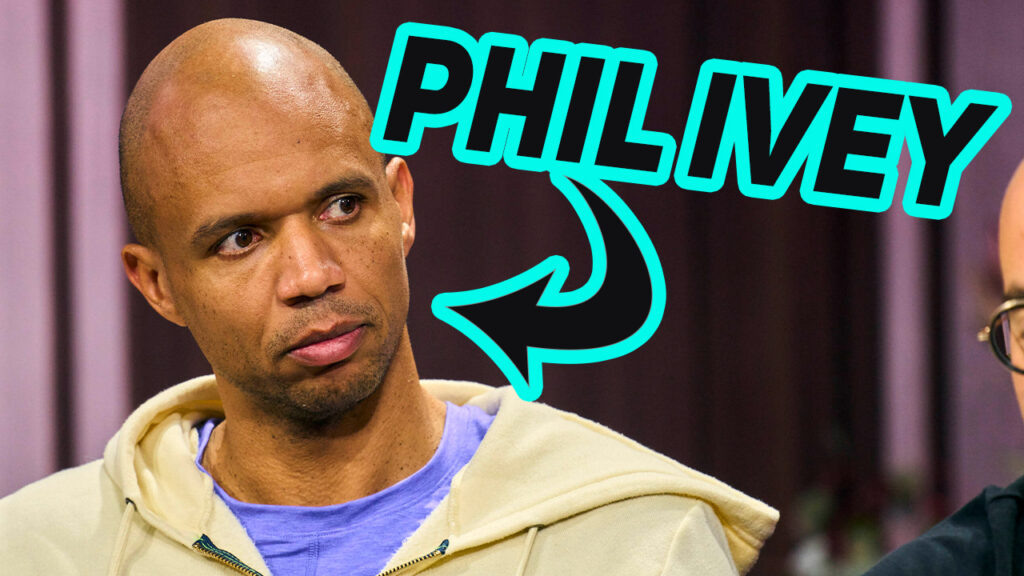 Ali Imsirovic finished Day 1 as the chip leader with 1,125,000 in chips ahead of Joni Jouhkimainen, Phil Ivey, Dylan Weisman, Eelis Parssinen, Iakov Onuchin, and Tomas Ribeiro. The final seven players are still a few spots away from the money-paying top five where there is $112,000 awaiting them while a $640,000 first-place prize awaits the winner.

The final seven players will return to the Merit Royal Hotel Casino & Spa on Monday, April 11, at 1 p.m. local time with the final table airing on the PokerGO YouTube channel at 7 a.m. ET / 4 a.m. PT with David Tuchman and Brent Hanks on commentary. 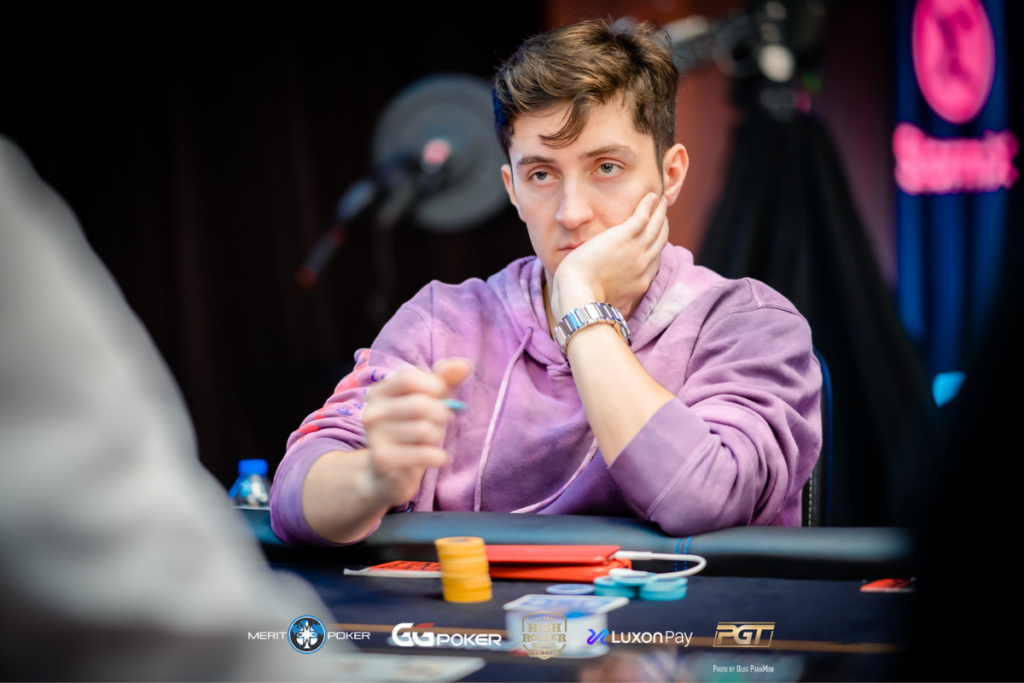 Day 1 of Event #4: $50,000 Pot-Limit Omaha from Super High Roller Series Europe is in the books. Leading the final seven players is current PokerGO Tour (PGT) leaderboard frontrunner Ali Imsirovic. Imsirovic bagged up 1,125,000 in chips and is the only player of the final seven with more than 1,000,000 entering Day 2.

The high-stakes PLO tournament drew 32 entries and created a $1,600,000 prize pool, with $640,000 set aside for the winner. The top five places will reach the money, meaning two players will go home empty-handed on Day 2.

The final elimination of Day 1 was Manuel Stojanovic. He was knocked out by Parssinen to hit the rail in eighth place and end play for the day. The two got the money in preflop, and it was Parssinen going on to make a full house with ace-king-four-two double suited against Stojanovic’s jack-jack-six-five.

Imsirovic is coming off a fourth-place finish in Super High Roller Series Europe Event #3: $25,000 No-Limit Hold’em when he cashed for $160,000. He also placed fifth in Event #1: $25,000 PLO for $80,000. Imsirovic took the top spot on the 2022 PGT leaderboard with an eighth-place finish in the Triton Poker Cyprus $100,000 NL Hold’em and has only extended his lead from there. Remember, Imsirovic is the defending PGT champion.

Ivey is the current leader of the Triton Poker Cyprus and Super High Roller Series Europe leaderboard, and the winner of that leaderboard will take home the series title and $25,000 bonus prize. He has cashed in four tournaments at the joint festival, winning one for $1,170,000. An in-the-money finish will earn Ivey his fifth cash and give him even more leaderboard points.

The final seven players are scheduled to return to the Merit Royal Hotel Casino & Spa in North Cyprus on Monday, April 11, for play to begin at 1 p.m. local time. Viewers from around the world can tune in to the PokerGO YouTube channel at 7 a.m. ET (4 a.m. PT) to watch the action with commentary from David Tuchman and Brent Hanks.

With the subsequent eliminations of Daniel Dvoress and Manuel Stojanovic, the unofficial final table has been reached. The seven remaining players will play it out for the title and the $640,000 first-place prize on Monday, April 11, from 1 p.m. local time (6 a.m. ET).

Eelis Parssinen moved all in from the big blind over a under-the-gun raise from Manuel Stojanovic. Stojanovic called.

and Parssinen hit a full house to dismiss Stojanovic in 8th place.

Jouhkimainen hit a flush on the

turn, eliminating Dvoress from the tournament. The

What started as a three-way limped pot turned into a heads-up battle between Ali Imsirovic (small blind) and Phil Ivey (big blind).

flop, where Manuel Stojanovic gave up.

Imsirovic check-called another 50,000 on the

“My turn,” said Imsirovic and turned up

Ivey said that Imsirovic had him beat and that it was a good play either way.

The Heart of Phil Ivey

filled the flush draw. Imsirovic checked and Ivey cut out a bet of 200,000. Imsirovic tanked for a while but then folded.

A three-way limped pot saw no action until the

turn, where Joni Jouhkimainen and Dylan Weisman checked from the blinds. Iakov Onuchin bet 40,000 and only Jouhkimainen continued, calling. 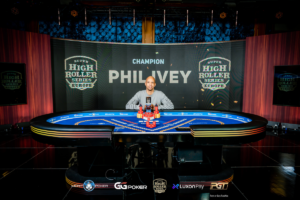 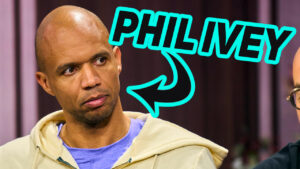 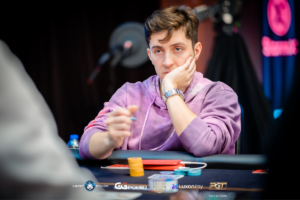