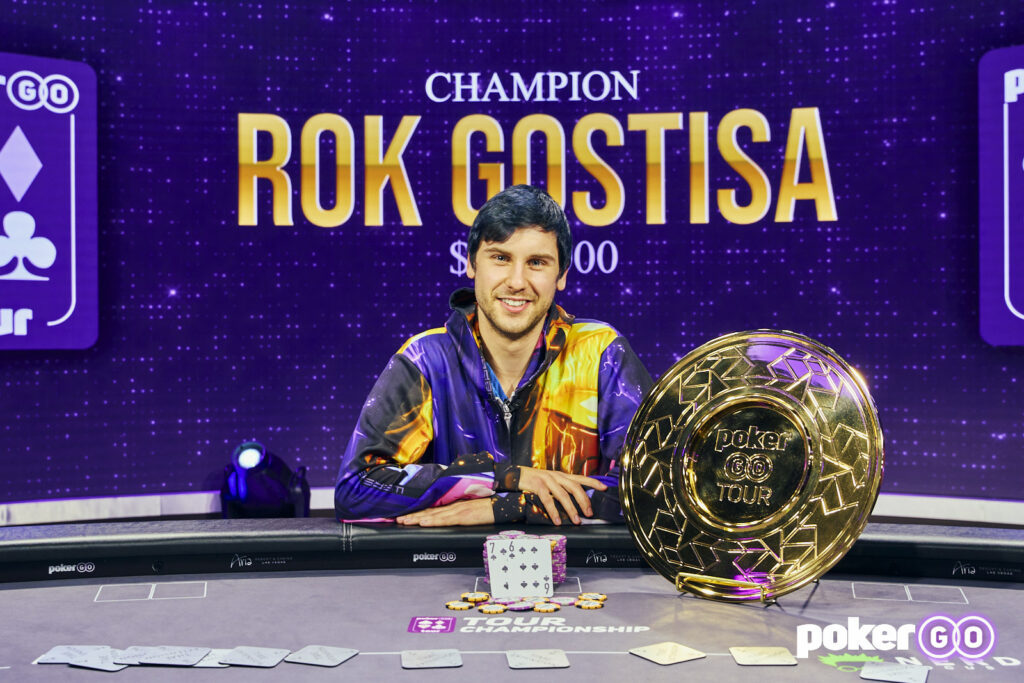 On Tuesday night in Las Vegas, Rok Gostisa won the final event of the inaugural season of the PokerGO Tour presented by Guaranteed Rate. Gostisa topped the 46-entry field in the $50,000 buy-in PokerGO Tour Championship, securing the bag for $689,100. Gostisa topped Michael Gathy in heads-up play to win the season finale.

“I didn’t expect to win because I came in seven out of seven, so it feels amazing,” Gostisa said in the moments after his victory.

The victory became the largest to date of Gostisa’s live poker career, capping off what has been a true breakout 2021 on the felt. Prior to this year, Gostisa didn’t have a year with more than $74,000 in live tournament winnings. With this win, Gostisa improved to nearly $1,600,000 in winnings in 2021.

“I was basically just playing online and because of COVID I didn’t travel,” Gostisa said. “This year has been going well, so I’m really happy about how it turned out.”

Gostisa entered the final day seventh in chips and had some stiff competition in front of him. He maneuvered his way to the top of the chip counts over the course of the first couple of hours of play, and then Dominik Nitsche busted in seventh place.

With six players remaining, Ren Lin moved all in with jack-ten from the button and was called by Gostisa in the big blind. Gostisa had pocket sixes and held up to eliminate Lin in sixth place and extend his chip lead.

After that, Gostisa had another pocket pair and another player on the ropes. This time, his pocket tens were up against the ace-deuce of Jacob Ferro. Gostisa’s tens held up, actually improving to a set on the turn, and Ferro was out the door in fifth place.

Jake Schindler would be the next player to bust, and it was Gathy who sent him packing. Gathy had aces and Schindler had two sevens, making for the end of the line for Schindler and setting up three-handed play between Gostisa, Gathy, and Sergi Reixach.

The three players battled for a bit before Reixach was eliminated in third place. On his final hand, Reixach got all in with queen-jack against the king-queen of Gostisa. Reixach couldn’t come from behind to get the double up and was busted in third place, taking home $345,000.

To begin heads-up play, Gostisa was in the lead by just about double the chips. The duel was a tough one, though, as Gathy took the lead and knocked Gostisa down to fewer than 1,000,000 in chips. In fact, Gathy had built up about a 10-1 chip lead over Gostisa during the heads-up match.

Gostisa battled his way back and then found a double up when the two players went at it with top pair against top pair. Gostisa had Gathy out-kicked on a queen-eight-two-seven board. Gostisa had queen-ten against Gathy’s queen-six and was able to double through to take the chip lead after a nine completed the board on the river.

Not too long after, the money went in again. This time, it happened preflop with Gostisa shoving with seven-six of spades and Gathy making the call with the queen jack of clubs. An ace-ace-seven flop put Gostisa in the lead and closer to winning it all. Another ace hit the turn to give Gostisa a full house, but he still needed to fade the river card, with Gathy needing a queen, jack, or the case ace to double up. Another seven on the river would force a chopped pot. The river was a six and that ended it, with Gostisa being crowned the PokerGO Tour Championship presented by Guaranteed Rate. With the two making a deal during heads-up play, Gostisa won $689,100 and Gathy took home $598,900.

With that, the inaugural season of the PokerGO Tour presented by Guaranteed Rate comes to a close. The final day was one to remember, with Gostisa triumphantly winning the final event of the season and Ali Imsirovic being crowned 2021 PokerGO Tour presented by Guaranteed Rate Player of the Year and taking home $200,000. For more on Imsirovic’s season-long win, read the story on his success.

Although the 2021 PokerGo Tour season has come to a close, 2022 is right around the corner and so is the first group of events. As always, stay tuned to the PokerGO Tour schedule for what’s up next. 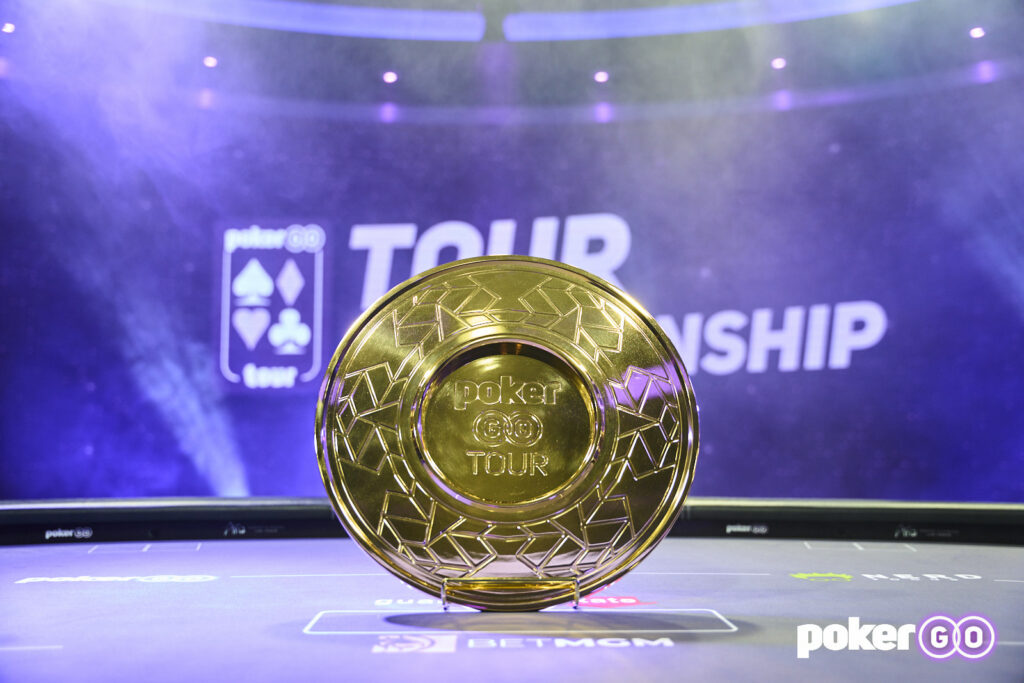 After being the shortest stack once the players combined to one table, Sergi Reixach rode a wave of cards to finish as chip leader with 1,475,000 in chips. Reixach is joined at the final table by fellow Europeans Michael Gathy and Dominik Nitsche, along with regular high rollers Jake Schindler, Rok Gostisa, and Ren Lin. Rounding out the final table and playing in his first PokerGO Studio event is Jacob Ferro who has just been crowned the Season XIX WPT Player of the Year.

The final seven players are guaranteed $92,000 in prize money, but all eyes are on the $782,000 first-place prize and title of PokerGO Tour Championship winner.

When play resumes there is 60 minutes remaining in level 13 and the button is on Sergi Reixach. 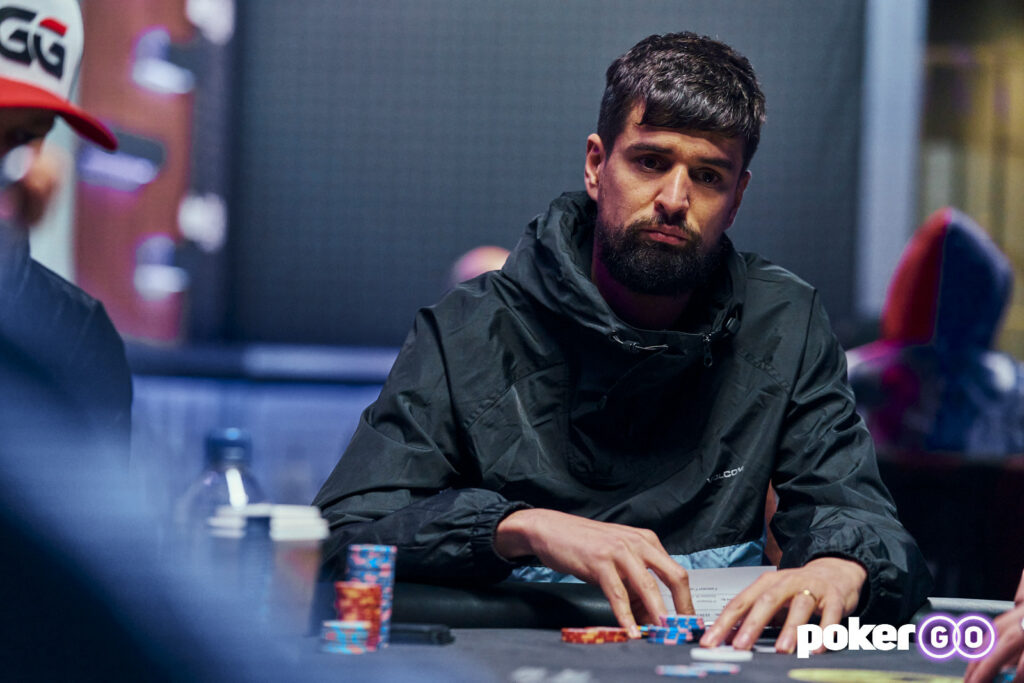 The conclusion to the PokerGO Tour presented by Guaranteed Rate season is down to the final leg as just seven players remain in the inaugural $50,000 buy-in PokerGO Tour Championship.

The final table is led by Sergi Reixach who rose from the shortest stack with nine players remaining, to the biggest stack with 1,475,000 in chips entering the PokerGO.com streamed final table that airs on Tuesday, December 21, at 6 p.m. ET.

Also at the final table alongside Reixach includes fellow Europeans Michael Gathy and Dominik Nitsche, along with regular high rollers Jake Schindler and Rok Gostisa as Jacob Ferro and Ren Lin round out the final seven. Those final seven players have all locked up $92,000 in prize money, but all eyes are on the $782,000 first-place prize and title of PokerGO Tour Championship winner.

When play resumes there is 60 minutes remaining in level 13 and the button is on Sergi Reixach.

The inaugural PokerGO Tour Championship saw a new concept of a $1,000 appearance fee for players that registered on-time. Nearly four full tables would kick off the action before the field eventually swelled to 46 entrants that created a $2.3 million prize pool to close out the 2021 PokerGO Tour presented by Guaranteed Rate season.

Once the field was reduced to the final nine, it would be Justin Bonomo falling first before Nick Petrangelo was eliminated on the money bubble by Nitsche. Down to the final seven players and needing to lose one more, chips circled between all seven players before it was decided that play would end for the night.

The final seven players will return to the PokerGO Studio on Tuesday, December 21, at 2 p.m. PT with the final table airing on PokerGO.com at 3 p.m. PT.

, Sergi Reixach checked from the big blind to Jake Schindler in the hijack who bet 30,000.

Reixach check-raised to 110,000 and Schindler called as the turn fell the

. Reixach bet 110,000 and Schindler called as the river landed the

Jake Schindler raised the button to 45,000 before Michael Gathy moved all-in for 995,000 from the small blind.

Schindler called all-in for 470,000 and tabled his

to be ahead of Gathy’s

and Schindler doubled through.

Michael Gathy checked from the big blind with the board reading

and Sergi Reixach bet out 125,000 from middle position.

Gathy called, and when the river landed the 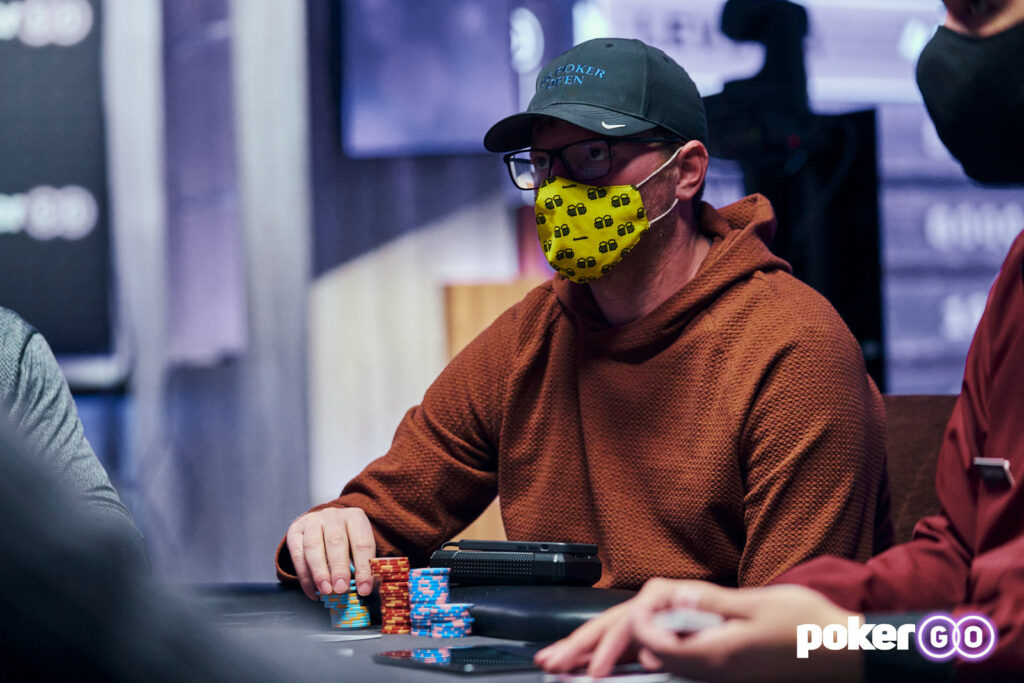 and Dominik Nitsche iso-shoved from the small blind with

and Petrangelo was eliminated in eighth place and on the PokerGO Tour Championship money bubble.

and Reixach doubled through.

Jake Schindler raised to 40,000 in the hijack and Sergi Reixach called in the big blind.

and Reixach check-called a bet of 25,000 as both players checked the

Action folded to Dominik Nitsche in the small blind, and he completed.

“No gamble, no future,” Lin said before moving all-in.

Nitsche quickly folded and Lin collected the pot and closed in on 1.9 million in chips. 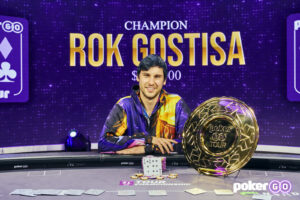 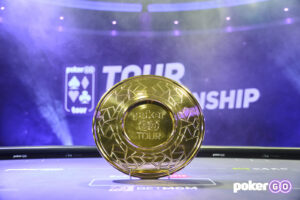 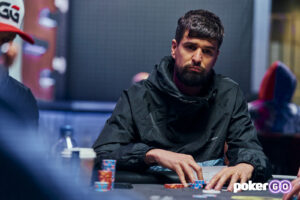 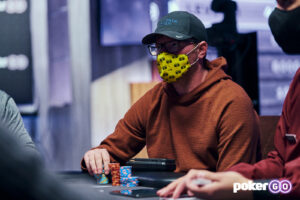 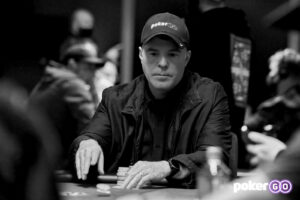 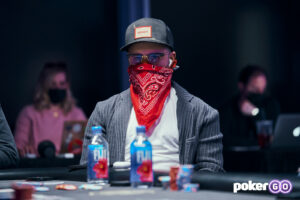 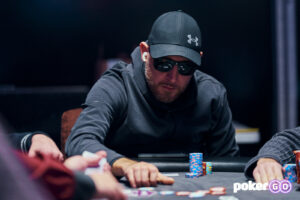 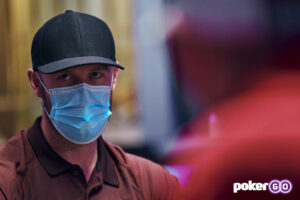 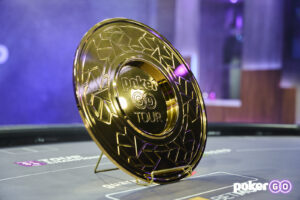 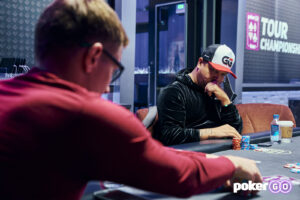 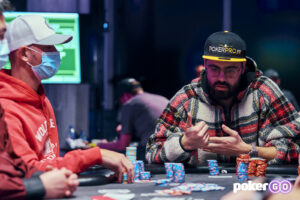 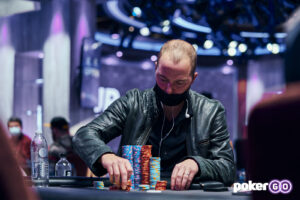 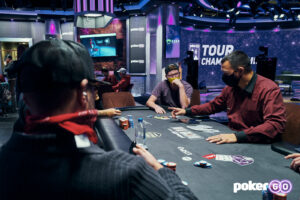 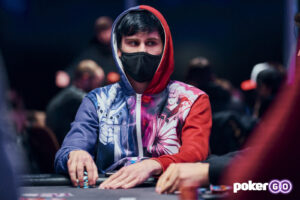 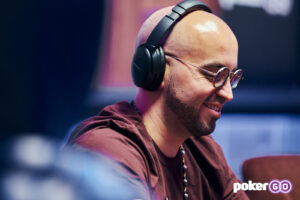 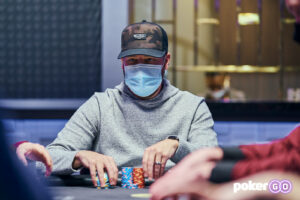 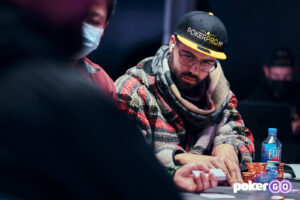 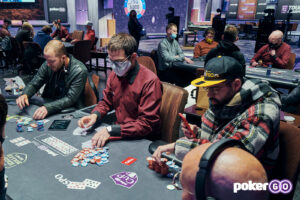 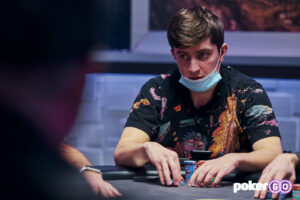 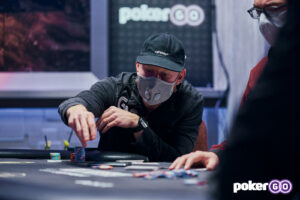 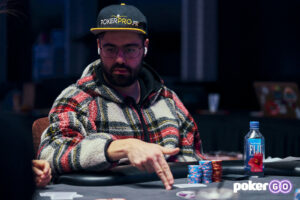 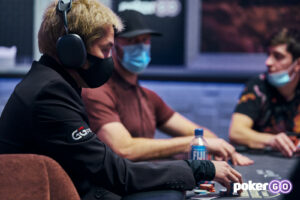 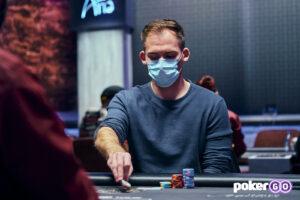 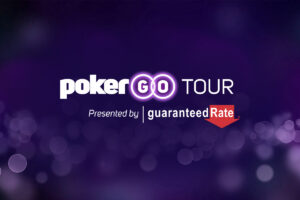