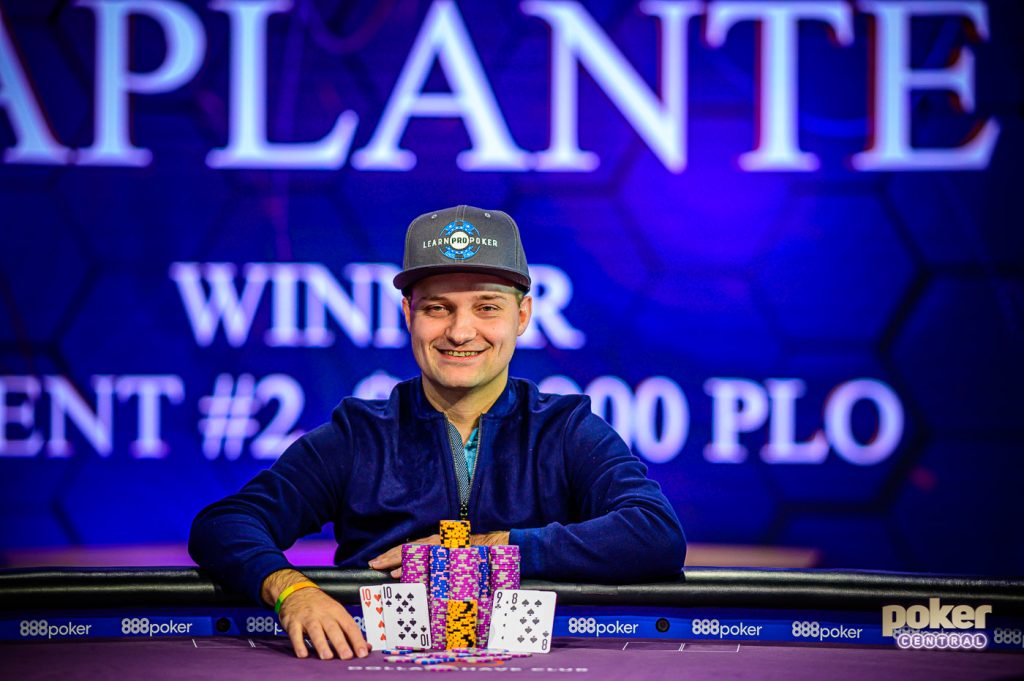 Ryan Laplante was at a loss for words after he took down the 2019 Poker Masters $10,000 Pot Limit Omaha event today. The long-time poker pro battled his way through a tough field of 62 entries that culminated with him beating the Event #1 runner up, Chance Kornuth, heads up. Laplante collected $186,000 for his win, the second biggest outright win of his career behind only his World Series of Poker bracelet win back in 2016.

Choking back tears, Laplante said, “Being able to play against these people, just even being able to compete, not even cashing, and then winning it is just absolutely absurd. Obviously, I thought it was possible when I signed up but when you’re playing against players of this caliber, and you pull through, it makes me feel very fortunate and very lucky.”

How the Action Unfolded

The final table started with six hopefuls lead by Ryan Laplante who held a commanding chip lead which he managed to carry all the way into heads-up play. Tim McDermott started as the short stack and he was the first player to get eliminated despite finding a quick double up at first. McDermott ended up all in with

and he was up against John Riordan’s

to send him to the rail.

Defending Poker Masters champion Ali Imsirovic was the next player to bust as aces were very unkind to him. Imsirovic nearly got all of his chips all in before the flop against Ryan Laplante who flopped the nut flush before the rest of the chips went in. Imsirovic did not catch runner-runner and headed for the exit in fifth place.

. The turn brought the

to send Riordan to the rail as Laplante made a straight. The action was reduced to heads-up play after Thai Ha busted in third place. Ha ended up all in with

sealed it as the eventual winner hit his flush.

. The chips went into the middle on a

as Kornuth flopped trips against Laplante’s full house. The turn and river brought no help as Kornuth finished second in back-to-back events while Laplante grabbed his first Poker Masters win.

About winning this tournament, that had a fast-paced structure on top of it being Pot Limit Omaha, Laplante was both realistic and excited.

“This tournament series as a whole is obviously very tough, playing against some of the best players in the world. The structure, however, is built to be pretty fast and especially in a game like PLO it’s a real battle and you’re constantly going for it. I tried my best to get into good situations and make thin bluffs, but honestly, I just ran really well and that’s required to win any tournament.”

Tune in for more coverage on PokerGO at 1:00 pm PT/4:00 pm ET tomorrow as the final table of the Short Deck event is next up. Live Reporting of the $10,000 8-Game Day 1 starts on Poker Central at noon PT. 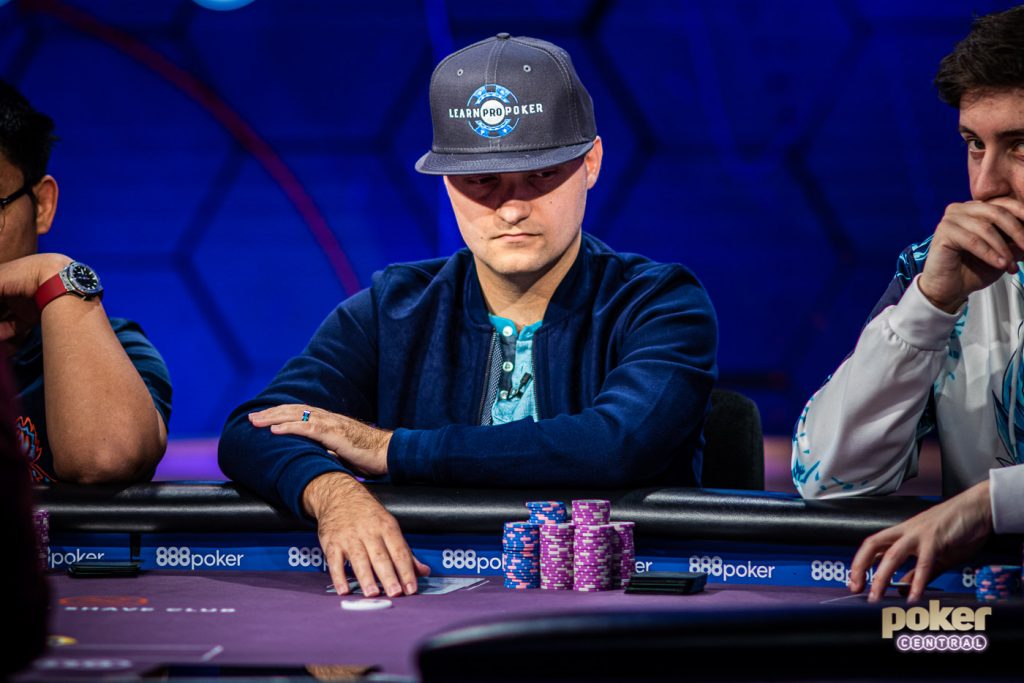 The second event of the series drew a total of 62 entries creating a prize pool just shy of over $600,000. The winner will see a return of $186,000 on their $10,000 buy-in. Leading the way is Ryan Laplante, after he caught late Day 1 heat to bag just over 2,500,000. Thai Ha – who is making back-to-back final tables – comes back second in chips, while Chance Kornuth is also back at a Poker Masters final table – albeit with a short stack.

The full final table seat draw is as follows.

The second event of the 2019 Poker Masters saw the game switched to Pot-Limit Omaha as 62-entrants took a seat inside the PokerGO Studio. After 17 full levels of play, Ryan Laplante finished as the chip leader with 2,540,000 in chips heading into Wednesday’s PokerGO streamed Event #2 final table.

After opening the 2019 Poker Masters with one of the biggest $10,000 buy-in tournaments the PokerGO Studio has seen, the numbers decreased as the cards increased for Event #2. With the game switching from No-Limit Hold’em to Pot-Limit Omaha, a new crop of players took a seat and created a prize pool of $620,000.

With the action flowing throughout the day, the redraw to the final two tables immediately saw a flurry of eliminations as Manig Loeser would be the eventual bubble boy in tenth place. Anthony Zinno (9th) and Brent Roberts (8th) all fell before the final seven redrew to one table, and although action stalled for a little, eventually it would be Damjan Radanov eliminated in seventh place to conclude play for the day.

The final six players are currently all guaranteed a $37,200 payday, but all eyes will be set on the first-place prize of $186,000 and the title of Event #2 champion. The player best positioned to claim that first prize is chip leader Ryan Laplante. Not a regular in these High Roller tournaments, Laplante is taking advantage of his opportunity after winning several key hands down the stretch to ascend to the top of the leaderboard. If Laplante can win this event, it will be just $4,000 shy of his biggest career cash when he won the 2016 WSOP Event #12: $565 Pot-Limit Omaha bracelet for $190,328.

Sitting second in chips is Thai Ha who finished in eighth-place in Event #1. Ha held the chip lead – along with Laplante – for the latter stages of the tournament, but after losing several pots to Laplante and others, he slipped down to finish with 1,730,000. Although Ha is one of the lesser known players at the final table, he is fresh off a WSOP Europe where he collected six cashes including a second-place finish in the €25,500 No Limit Short Deck Hold’em – High Roller for €457,964.

Third overall is the defending Poker Masters Purple Jacket holder Ali Imsirovic. Although he arrived to the final table of seven players as one of the short stacks, he rode a mini-heater and eliminated Radanov to finish with 1,596,000 in chips and is in position to collect points to make a run at back-to-back Purple Jacket victories. In fourth place is John Riordan with 990,000 in chips courtesy of a double through Ha a few hands before play concluded. Riordan has been a regular in the Pot-Limit Omaha tournaments held in the PokerGO studio, but this will be his first cash in either of the U.S. Poker Open or Poker Masters series’.

Rounding out the final spots at the final table are Chance Kornuth and Tim McDermott with 545,000 and 410,000 respectively. Like Ha, Kornuth already collected a cash in Event #1 when he finished in second-place to Isaac Baron for a $164,900 payday. Already a regular in the PokerGO studio with appearances on Poker After Dark and other shows, Kornuth is making a run at becoming the 2019 Poker Masters Purple Jacket winner as a fifth-place finish sees him tied with Baron, while a fourth-place finish gives him the lead – and barring a Ha victory in Event #2 – he will be the points leader heading into Event #3. McDermott is another player new to the High Roller scene in the PokerGO Studio, but after 10 cashes during the WSOP which included a second-place finish in the $1,500 Dealer’s Choice, he will be hoping to spin up his 14-big blind stack to collect the first-place prize that is nearly twice his biggest career score. 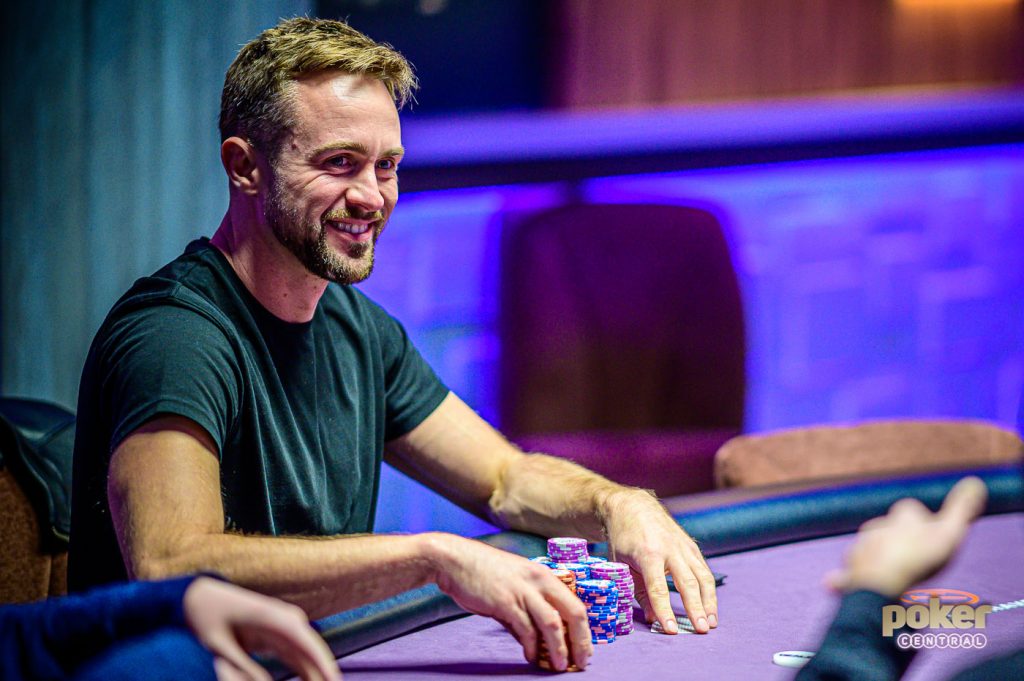 Ali Imsirovic raised to 75,000 from middle position and Damjan Radanov called in the big blind.

In a set-over-set cooler for Radanov, he would need to find the case jack to stay alive.

on the turn, followed by the

on the river wouldn’t be what he was after, and Radanov would be eliminated in seventh place for a $31,000 payday.

John Riordan opened to 90,000 from middle position and Thai Ha three-bet to 310,000 as the next player to act. The table folded back to Riordan and he called, leaving himself around 175,000~ behind.

Those chips went into the middle after the

flop fell and Ha snap called to try to score the knockout.

and he needed to hold against

The former chip leader didn’t though, as the turn completed Riordan’s draw with the

completed the board and when the dust settled Riordan was near 1,000,000.

Chance Kornuth limped in from the hijack and Thai Ha raised to 80,000 on the button.

Action folded back to Kornuth, and he called before both players checked the

The turn landed the

and Kornuth bet out 75,000. Ha called, and when the river landed the

Ryan Laplante opened to 50,000 from under the gun and three players called – including Thai Ha in the small blind.

flop and Damjan Radanov did the same in the big blind. Laplante continued for 125,000, leading John Riordan to fold on the button before Ha called and Radanov released.

fell on the turn and Ha checked again – only to see Laplante bet 325,000. Ha called and he checked for a third time after the

paired the board on the river.

Laplante took a few moments before he announced his next bet – sized at 850,000.

Ha went deep into the tank, using two time extensions and nearly a third before he eventually folded.

“Show the bluff.” Ha said hopefully, to which Laplante quickly replied, “No one ever bluffs in PLO.” 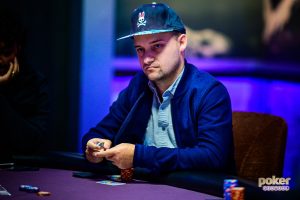 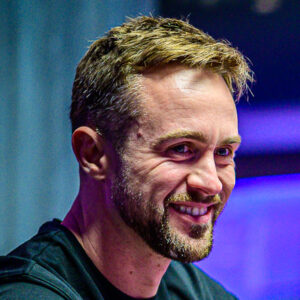 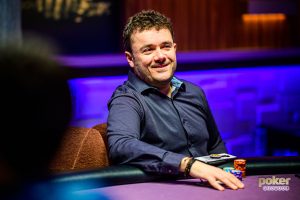 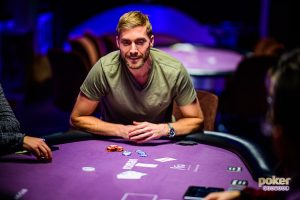 Anthony Zinno Triples Through Thai Ha and Ryan Laplante
November 6, 2019 at 12:39 am ET 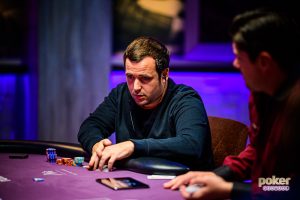 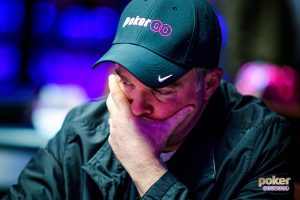 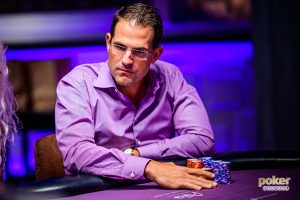 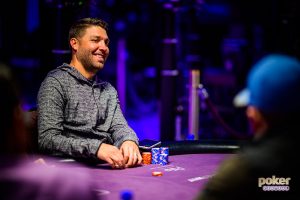 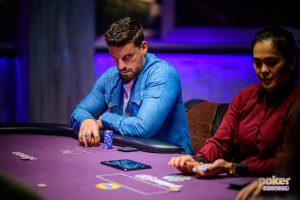 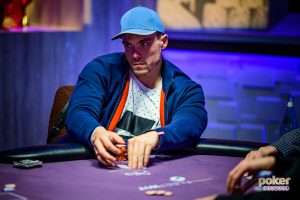 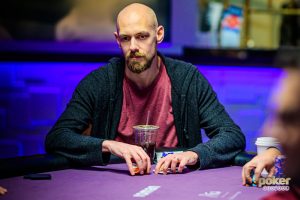