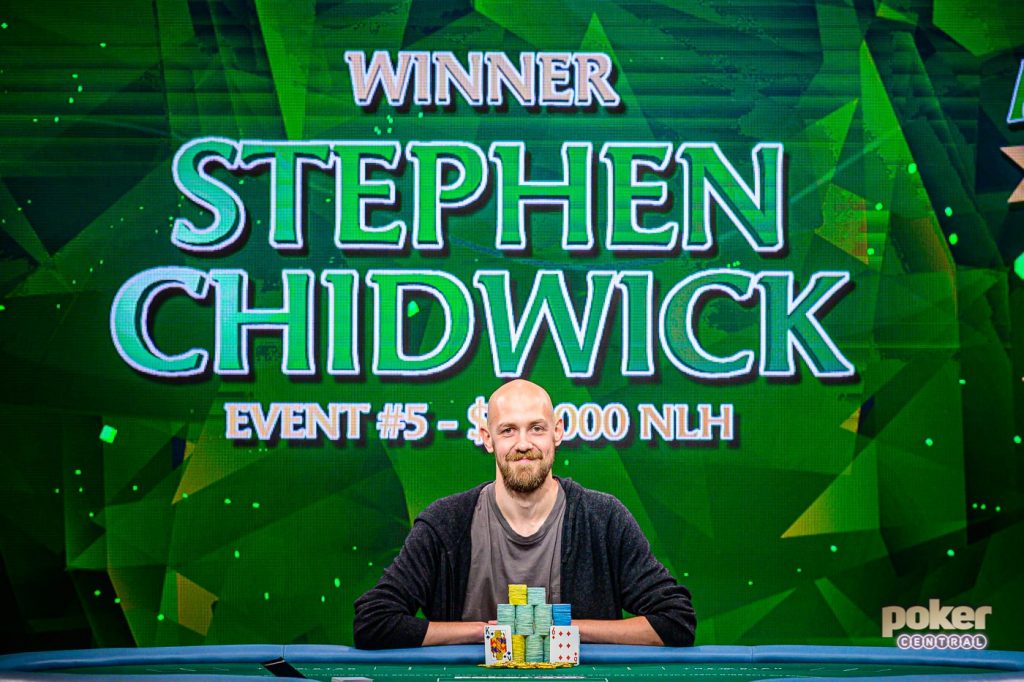 “This is a lot of fun,” the ever-stoic Chidwick said after his win. “I really like this format of playing a week of tournaments, one every day, and battling against some of the best players to see who can run the best. It also feels nice to be in contention for the Australian Poker Open title, it seems like I’m in contention in most of these series that I play.”

To date there’ve been 33 total Open events, Chidwick has made 15 final tables and won six of them.

Event #4 winner Farid Jattin was the first player to get eliminated, as he ran ace-ten into the sixes of Aussie Michael Addamo on the first all-in showdown of the day. Addamo’s sixes held up and Jattin was sent to the rail, climbing to fourth on the Championship standings in the process.

Seth Davies seemed destined to bust in fifth place when he needed to fade 19 outs on the turn and river versus Addamo. Davies’ tiny pocket pair, however, held up as Addamo did not hit any of his outs, and Davies doubled up. Shortly thereafter, Jorryt van Hoof busted in fifth place. On the Dutchman’s final hand he ran jacks into Davies’ queens and the board brought no help.

Addamo was next to go in fourth place, as he shoved king-eight into the ace-king of Seth Davies. Due to the stack sizes, Stephen Chidwick called as well to put two players at risk. Instead of Chidwick getting two scalps for the price of one, it was Davies who won the hand, sending Addamo to the rail and doubling up in the progress.

Davies held a serious chip lead at this point of the proceedings but after Chidwick doubled through him, his run ended almost immediately after when the Brit took the remainder of his chips. Davies moved all in with ace-five and was called by Chidwick with king-nine. Davies flopped an ace but deep down he must’ve known he wasn’t safe until the river. Chidwick pulled four total diamonds out of his hate to make a flush and send Davies to the rail.

The heads-up battle only lasted a few hands as Erik Seidel had maneuvered his way into second place with an 8:1 chip-disadvantage. On the final hand, Seidel found queens but those were no match for Chidwick’s king-six. Chidwick hit a king on the flop and won yet another tournament!

Reflecting on the entire Australian Poker Open, and high roller series as a whole, Chidwick emphasizes that this type of grind is way more up his alley than the World Series of Poker.

“The World Series of Poker is too long of a grind. It’s easy to get burned out unless you take real breaks. This kind of series is perfect. I play really hard for 10 days and then have more extended stretches before my next event.”

With two events left to be played, the Championship standings, with a $50,000 top prize for the eventual winner, are now as follows. 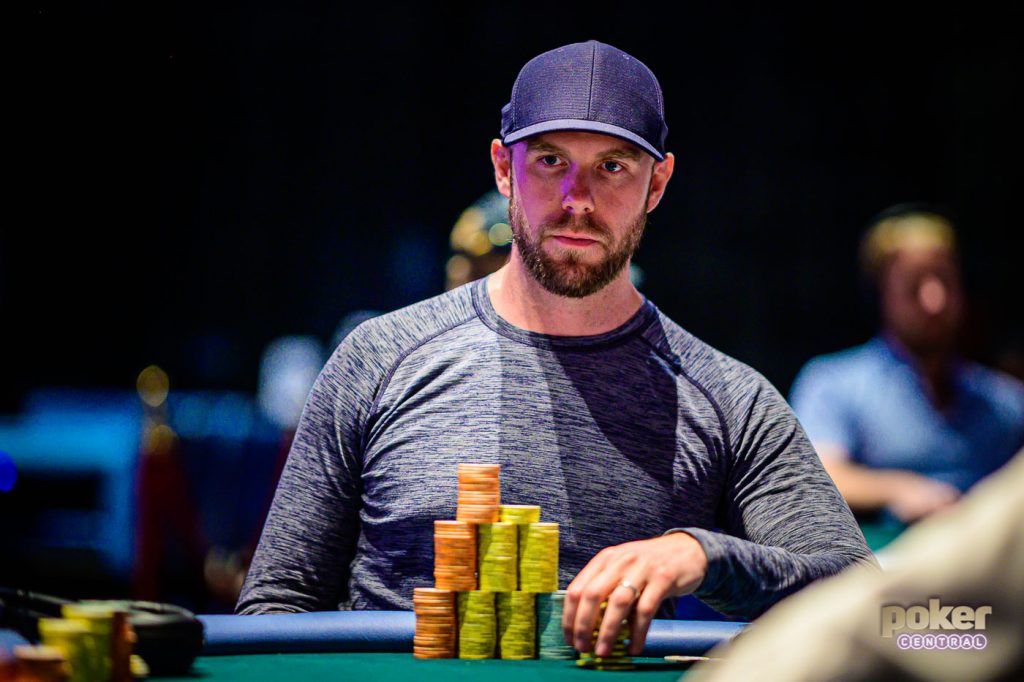 The fifth event of the 2020 Australian Poker Open was Event #5: AU$25,000 No-Limit Hold’em held from inside The Star Gold Coast. After almost 18 levels of play, just six players would remain with Seth Davies holding the chip lead with 1,570,000 heading into Thursday’s PokerGO streamed Event #5 final table.

With a return to No-Limit Hold’em, the tournament would open with a 50th birthday celebration for Cary Katz, and as players were treated to a birthday cake supplied by The Star Gold Coast, a total of 47 entrants would create a prize pool of AU$1,175,000 that would pay the final seven places. Once the final nine redrew to one table, it would take roughly 30 minutes until George Wolff exited in ninth-place, and then another 30 minutes before Chino Rheem would fall short of his third cash of the series when he was eliminated on the money bubble in eighth place.

Matthias Eibinger would be the final elimination of the day as he exited in seventh place for a $58,750 payday at the hands of Erik Seidel in a pot that saw him double through Farid Jattin. The final six players are all guaranteed AU$70,500 in prize money, but all eyes are set on the first-place prize of AU$399,500 and the title of Event #5 champion. The player best positioned heading into the fifth final table of the Australian Poker Open is Seth Davies who has been hovering around the top of the chip counts since before the second break. Davies has amassed over $7.6 million in lifetime tournament earnings which includes a WPT title and a multitude of high roller scores. If Davies can prove victorious, he will leapfrog Shaun Deeb to move into 74th place on the United States All Time Money List.

Playing in his first Australian Poker Open event has seen Australia’s Michael Addamo bag 1,210,000 in chips to sit second overall. Addamo has amassed over $6.93 million in lifetime tournament earnings that sees him sit third on Australia’s All Time Money List behind Kahle Burns and Joe Hachem. In his hometown series of the Aussie Millions, Addamo won the AU$50k Challenge for AU$1,073,790 in prize money – his second biggest score behind his 2018 WSOP Europe €25,000 High Roller victory.

Stephen Chidwick sits fourth overall with 1,100,000 in chips. Chidwick finished runner-up to Timothy Adams in Event #3 and saw his lifetime tournament earnings move to nearly $33.62 million, and with a top three finish, he can move to sixth place on the All Time Money List.

Fifth overall is Dutchman Jorryt van Hoof who ended the day with 705,000 and is collecting his first Australian Poker Open cash after several close calls this series. Rounding out the final table is Event #4 champion Farid Jattin with 190,000 in chips. Jattin lost a big hand to conclude Day 1 play, and although he has an uphill climb unlike his previous final table, Jattin’s motivation will be moving up the Australian Poker Open Championship standings where he currently sits fifth – 180 points behind Andras Nemeth who is leading. 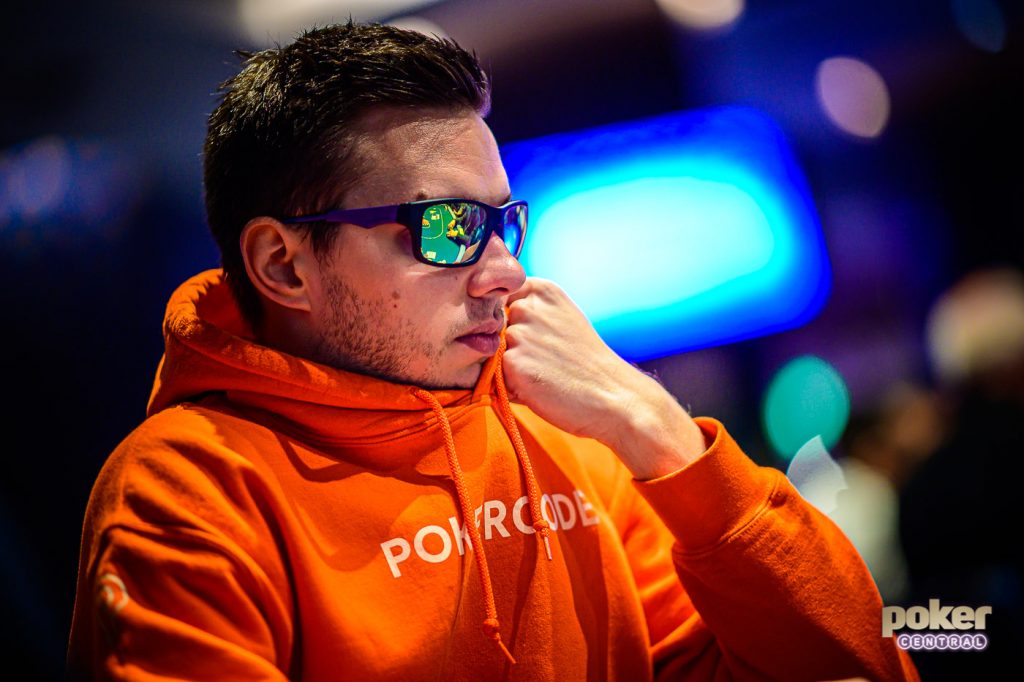 Erik Seidel raised to 60,000 from the cutoff. Matthias Eibinger used a time extension, before raising to 145,000 from the button, leaving himself 5,000 behind. Farid Jattin three-bet to 475,000 from the big blind which had Seidel covered. Seidel called with a total of 455,000 behind. Eibinger called off his remaining chip.

, improving Seidel to a set of queens on the flop, awarding him the pot and eliminating Eibinger from the tournament.

Seth Davies raised to 65,000 from middle position and was called by Michael Addamo in the big blind.

Both players then checked after the

for a missed flush draw. Davies flipped over

and took down the pot with a full house.

From late position, Michael Addamo raised to 60,000 and Stephen Chidwick three-bet the button to 160,000.

Action folded back to Addamo, and he called as the flop landed 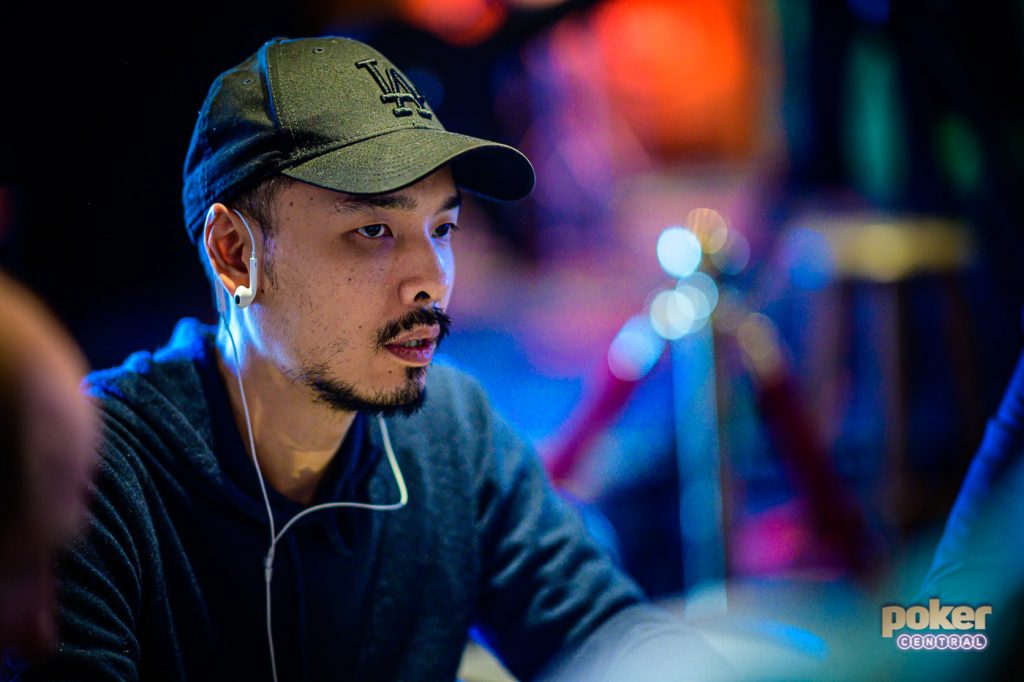 Chino Rheem moved all in for exactly 100,000 from under the gun. The action folded around to Jorryt van Hoof in the big blind, who deliberated over his decision for a moment, then called.

, improving van Hoof to a straight on the river, resulting in Rheem missing out on the money by one spot.

The remaining seven players are guaranteed $58,750 for their efforts.

and van Hoof doubled through.

, and took down the pot with two pair, after Jattin mucked his hand. 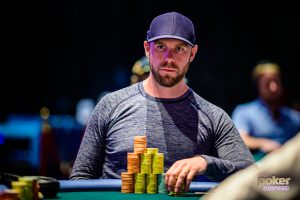 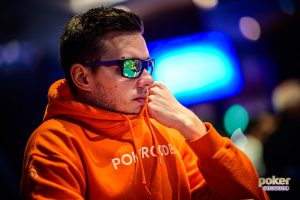 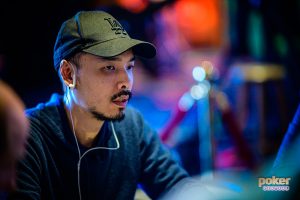 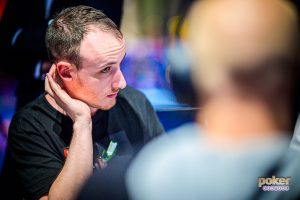 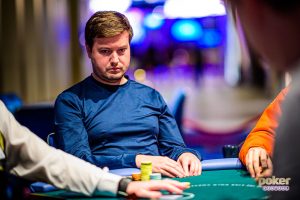 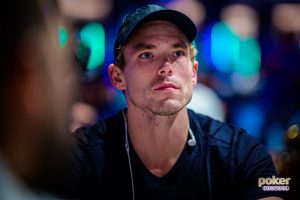 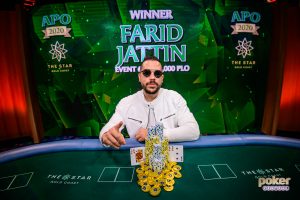 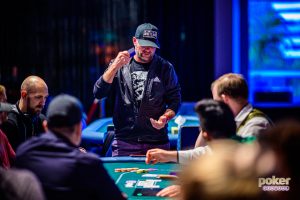 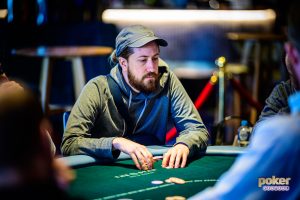 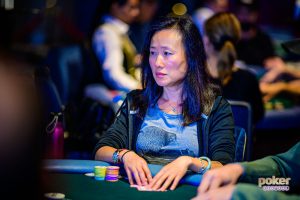 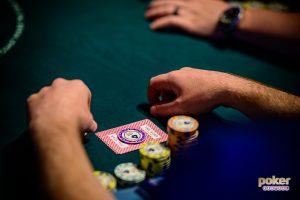 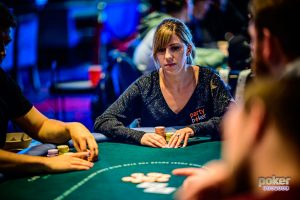 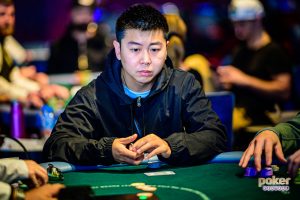 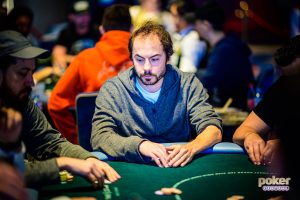 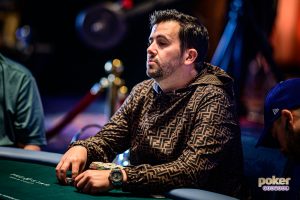 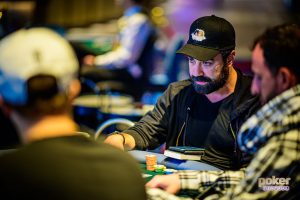 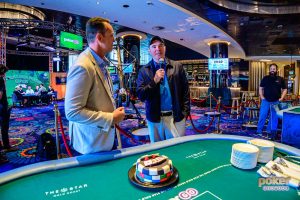