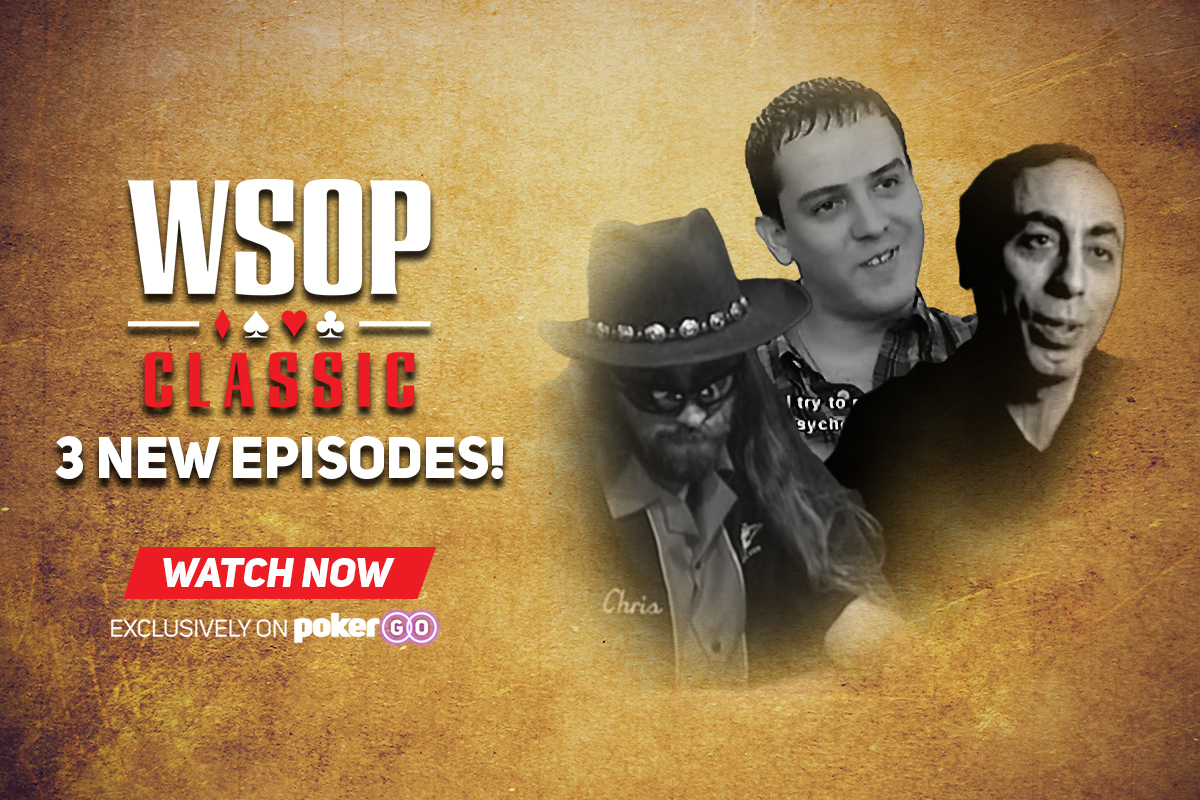 The World Series of Poker (WSOP) collection on PokerGO.com includes over 600 continuous hours from the WSOP, WSOP Europe, and WSOP Asia-Pacific. In just a week it will start to grow with the upcoming 2022 WSOP making its debut on the Las Vegas Strip at Bally’s / Paris Las Vegas.

For those diehard poker fans that love the old-school WSOP episodes, PokerGO’s WSOP Classic collection is set to expand with three uncovered episodes being made available to celebrate the upcoming 2022 WSOP being streamed live and exclusive on PokerGO.com.

Originally thought to be lost to the days of the VHS tape, 1983 WSOP Main Event champion Tom McEvoy came to the rescue by providing PokerGO with the 2000 and 2001 WSOP Main Event episodes. One of the missing bracelet events from the 2004 WSOP was found in the archives as all three episodes were digitized for PokerGO subscribers.

The WSOP Main Event collection now grows to 39 final tables being found exclusively on PokerGO.com following the addition of the 2000 and 2001 WSOP Main Events. The 2000 WSOP Main Event would attract 512 entrants and see the final table led by Chris Ferguson who held over half the chips in play ahead of James McManus, Roman Abinsay, Steve Kaufman, Hasan Habib, and T.J. Cloutier. The 2001 WSOP Main Event would attract 613 players and set aside a $1.5 million first-place prize. German Henry Nowakowski entered the final table holding a slender chip lead over Spaniard Carlos Mortensen and crowd favorites Phil Hellmuth and Mike Matusow. Others at the final table include Phil Gordan, Stan Schrier, Dewey Tomko, Steve Riehle, and John Inashima as the $1.5 million first-place prize awaited the eventual 2001 World Champion.

The 2004 WSOP collection included 11 episodes from the 2004 Main Event, and 14 episodes from WSOP bracelet events. That number will now increase by one with the addition of the $5,000 No-Limit 2-7 Single Draw final table. Barry Greenstein entered the final table as chip leader and was looking at capturing his first WSOP bracelet. Greenstein would still have to contend with some of the game’s elite mixed game players including Chris Ferguson, Wil Wilkinson, Howard Lederer, Chau Giang, Steve Zolotow, and Lyle Berman as the $296,200 first-place prize awaited the eventual winner.

What is WSOP Classic?

WSOP Classic is a collection of WSOP videos prior to 2010 that goes all the way through to the 1973 WSOP Main Event. It includes nearly 200 hours of WSOP footage that includes 28 WSOP Main Event final tables, and nearly 80 WSOP bracelet event episodes.

From the early days of the WSOP where Bobby Baldwin and Hal Flower picked up gold in the late 1970s, to the 1980s where Stu Ungar won his second Main Event and Doyle Brunson was denied his third win. The 1990s featured nine episodes including Russ Hamilton winning the 1994 WSOP Main Event and his weight in silver, along with the first outdoor final table held on the Fremont Street Experience in 1997. The 1990s conclude with Scotty Nguyen’s famous, “You call, it’s gonna be all over, baby,” while the 2000s begin with these two new episodes before a plethora of amateurs claimed victory as the poker boom was launched on the back of Chris Moneymaker’s win in 2003.