You are here
Home > News > The Final Table of the 2019 World Series of Poker Main Event is Set! 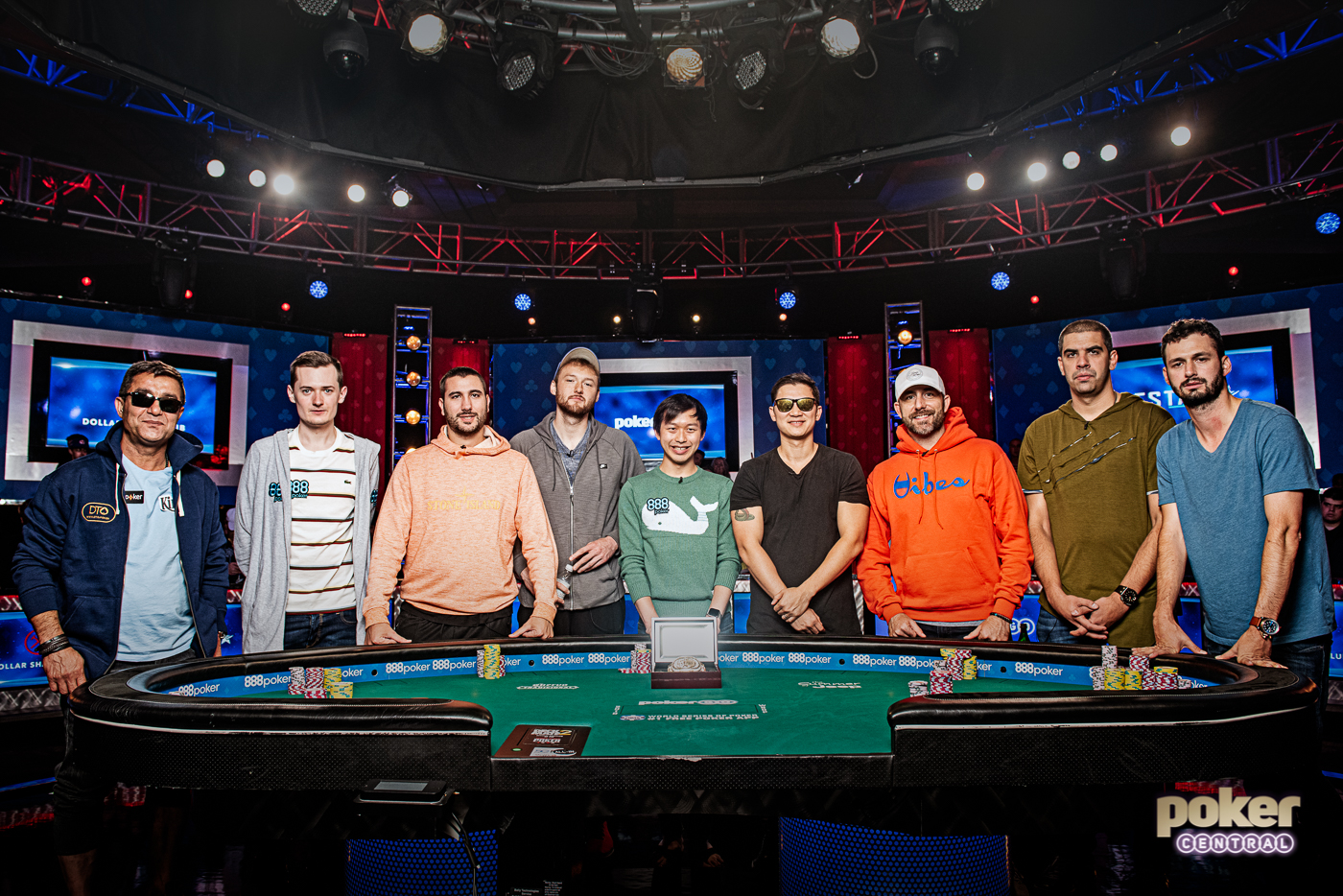 One of the most epic days of this or any World Series of Poker is in the can. After 35 players started the day, just nine remain as one of the best WSOP Main Event final tables in history is set. Players from around the world, a poker media favorite, the potential youngest winner in history, all are at the final table.

Coming into the final, Hossein Ensan will have the chip lead, having bagged up an incredible 177 million chips, almost double his nearest rival’s stack. Ensan won many of those chips in a stunning pot where he raised then called a three-bet to 6.8 million from action player Timothy Su who has already provided so much entertainment in the Main Event.

On the queen-high rainbow flop with a ten and seven, Su laid out a c-bet for 6 million and Ensan called, while both players checked the seven on the turn. On the six river, Su bet 16 million, Ensan raised to 45 million and Su called, with no flush out there. Ensan turned over pocket tens for a turned full house and that was enough to vault him to by far the most chips anyone has had in this event at this stage for some time. While Su would end on 20.2 million, Ensan will go into the final table as the man to stop.

Since his ace-king got there on the river against kings earlier in the tournament, Garry Gates has looked unstoppable. Even down to 12 million chips earlier in the day, he was firing out bets, taking back control and fighting for his tournament life at every turn. In doing so, he’s bagged just under 100 million chips, and has the biggest swathe of fans in his corner, having worked in poker for well over a decade.

“I’ve been playing this tournament off and on for ten years and had some deep runs, but it’s never felt this real,” said Gates to us shortly after making the final table. “I’m at a total loss for words, it’s still sinking in, it’s just incredible.”

Gates looked back on his tournament for us and identified one hand where it all changed.

“I think it has to be the ace-king versus kings hand against Robert [Heidorn]. I’m not going to say its destiny or written in the stars, but it became so real in that moment. I thought ‘We got a shot at this, I’ve got a big stack and I’m playing well.’”

Gates has played superbly and is second in chips with only eight players between him and poker immortality. He strikes an obvious comparison at winning so big in his life.

“Nowhere else in the world could you get these kinds of odds at winning $10 million; look at the lottery. Here you have a roughly 8500-to 1 chance and every day the field dwindles, and your chances get better. Now it’s 1 in 9 and that’s pretty cool.”

Gates knows he’ll have to be on form from Sunday, but can’t wait for the challenge that lies ahead.

“I like the way I played today, I’m excited for Sunday, it’s going to be fun. Being an industry person and having so many interactions with some of the best players in the world, cheering them on and seeing their dreams come true… this morning I woke up to messages from Erik Seidel, John Juanda, and Jason Koon wishing me luck – that’s crazy!”

He’s come a long way from when he first arrived in Las Vegas and now shares the moment with his family, something he sees as perfect.

“15 years ago I packed up my entire life into a Honda Accord. I didn’t even have a phone. Early on I went broke, [so] for to my life and career to pan out the way it has is incredible.”

Gates’ run to the final table is that of dreams, of harbored hopes that almost never see the light of day. He’s shown just what a player he is and in getting so far has guaranteed himself a windfall of a million bucks. How he’d love to see the job through over the course of the next few days after a rest day and end up $10 million richer.

Possibly the biggest name at the final table is the Italian superhero Sammartino, who only has 33.4 million but all the talent in the world to make things very uncomfortable for anyone who isn’t on top of their game from the tail-end of the weekend through to Tuesday night.

Sammartino was up and down all day, but there was an air of inevitability about his appearance at the final table. Every other player will be hoping he gets into trouble and busts, and with each elimination he avoids, his stock will grow. If he can keep his chips going in the same direction, he will be many people’s pick for the win.

The potential for a new youngest winner in WSOP Main Event history still exists, with Nick Marchington coming into play as the short stack with nothing to lose but everything to gain. Marchington ended the day with 20.1 million, just one big blind behind Timothy Su’s stack after he went into play as chip leader.

Marchington, who could beat Joe Cada’s record set exactly ten years ago, would be the talk of Britain and the poker world if he could seal victory when the final heads-up arrives.

Others would not be so lucky, with former overnight chip leader and Norwegian pro Preben Stokkan busting on the day, as well as the aforementioned Robert Heidorn, who would be the final table bubble boy.

Find out now how you can watch the 2019 WSOP Main Event final table by clicking on this link.

The payouts at the final table are as follows.