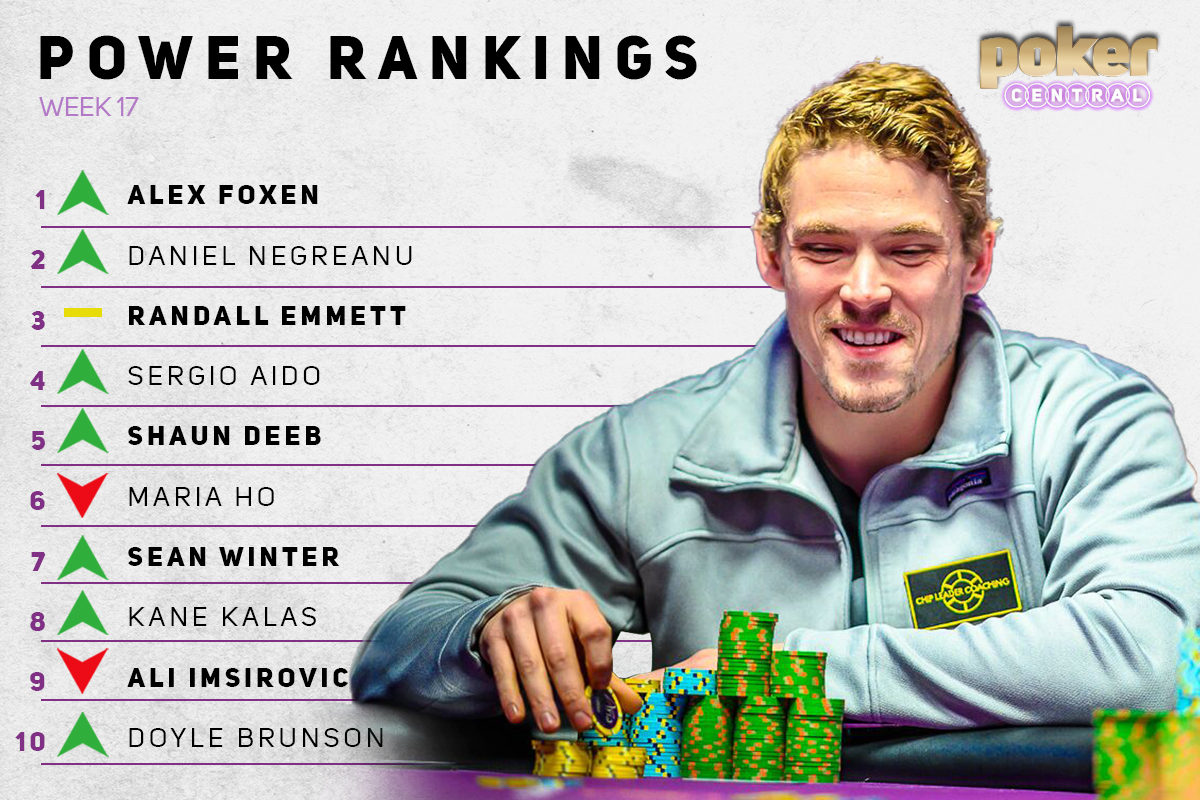 The Week 17 Poker Central Power Rankings shake things up in a large way! Alex Foxen jumps into the top spot.

Alex Foxen! No. 1 on the GPI overall standings, in the hunt for the 2019 Global Poker Index Player of the Year coming off of winning it in 2018, and now No. 1 on the Poker Central Power Rankings after a very hot week in Monte Carlo. Daniel Negreanu and Shaun Deeb make big jumps in part due to their Twitter spat, Randall Emmett holds steady despite gaining a lot of points because of his controversial social media drama with 50 Cent.

The Poker Central Power Rankings are voted on each week by five-panel members who use their own criteria to determine player relevance leading to a list of 25 players that score points from 65 down to 1. The criteria loosely include player results, social media influence, some good ol’ drama or other things of note that make ear perk up and our eyes grow bigger. Got beef with our decisions on a week-to-week basis? Hit us up on @PokerCentral on Twitter and jump into the conversation.

This man just does it all with big results! Foxen is defending his 2018 Player of the Year honors perfectly so far, racking up two big scores in Monte Carlo this week. Foxen finished fifth in a €25k High Roller and second in a €50k for a total just shy of a million dollars. Foxen also appeared on Joey Ingram’s podcast and dropped some great knowledge for you to check out!

Daniel Negreanu joined the Poker Central Podcast to talk about all the recent drama and his second-place ranking is largely due to being heavily involved in Twitter drama as well as him offering up some great packages for the 2019 WSOP. Check out his vlog right here.

If you can't beat him, buy him! @RealKidPoker just announced he is selling @WSOP action for as little as $5. 🤑https://t.co/nT78NAZPdK

He didn’t make it to the top spot even though his points total is higher than ever but the voting panel valued Daniel Negreanu’s poker specific Twitter drama and Alex Foxen’s stellar results higher. Emmett was involved in a comedic yet dramatic social media spat with rap legend 50 Cent over the steep amount of $1,000,000. Emmett paid up his debt and it’s only a matter of time before we see him again in the PokerGO Studio!

I got my money, so I have no problem with Randall Emmett, in fact I’m wishing him and his family a very blessed day. 😏positive vibes now guys. LOL #lecheminduroi #bransoncognac #bellator pic.twitter.com/ieFjoLrVUc

Shaun Deeb, better known as the mark-up police, played on Dolly’s Game, jumped on Joey Ingram’s podcast, and had an ongoing Twitter spat with Daniel Negreanu. Good enough to be ranked fifth on the Power Rankings!

Still going very strong in 2019, Maria Ho is currently doing damage in Monte Carlo where one of the biggest EPTs of the year is going on. Maria is in anticipation of her big WPT final table at the end of May and her ranking in the Top 10 is now in its seventh straight week. After two weeks at No. 1, however, she dropped a few spots to sixth this week.

Sean Winter finished second in a Monte Carlo €25k High Roller for nearly half a million to continue his strong year after just missing out on the U.S. Poker Open title in February. Winter now has $2 million in earnings in 2019, making this already the second-best tournament year of his poker career.

Kane Kalas made an interesting prop bet with Doyle Brunson after playing on Dolly’s Game inside the PokerGO Studio. Kalas made his debut inside the studio and to many fans, this was the very first time they saw him play in a non-hold’em format. Kalas might be ranked high more consistently if he keeps battling with the biggest names in 2019!

Interesting bet vs @TexDolly
2019 @WSOP #MainEvent
I owe 50K if @phil_hellmuth places top 1%
He owes 5K for each of these ppl in top 1%@Jake__Schindler @dude904 @JustinBonomo @WAFoxen @KaneKalas@paulgees81@NegriinLuca@byoonz @Amadi_17@dpeterspoker17
Which side u like?

Ali Imsirovic dropped quite a few spots after winning back-to-back ARIA High Rollers two weeks ago. Imsirovic still ranks first overall on the High Roller of the Year standings and looks to be a big favorite to take it all down as he announced to be playing these all throughout the summer.

Entertaining the masses for two nights on Dolly’s Game, Doyle Brunson got some serious love again this week on the Power Rankings. Relive Dolly’s Game on PokerGO right now.

Tune in again next week for the latest Poker Central Power Rankings! Until then, listen to Brent Hanks and me discuss this week’s rankings on the Poker Central Podcast. Looking to watch the latest live and on-demand poker action? Subscribe to PokerGO right now.