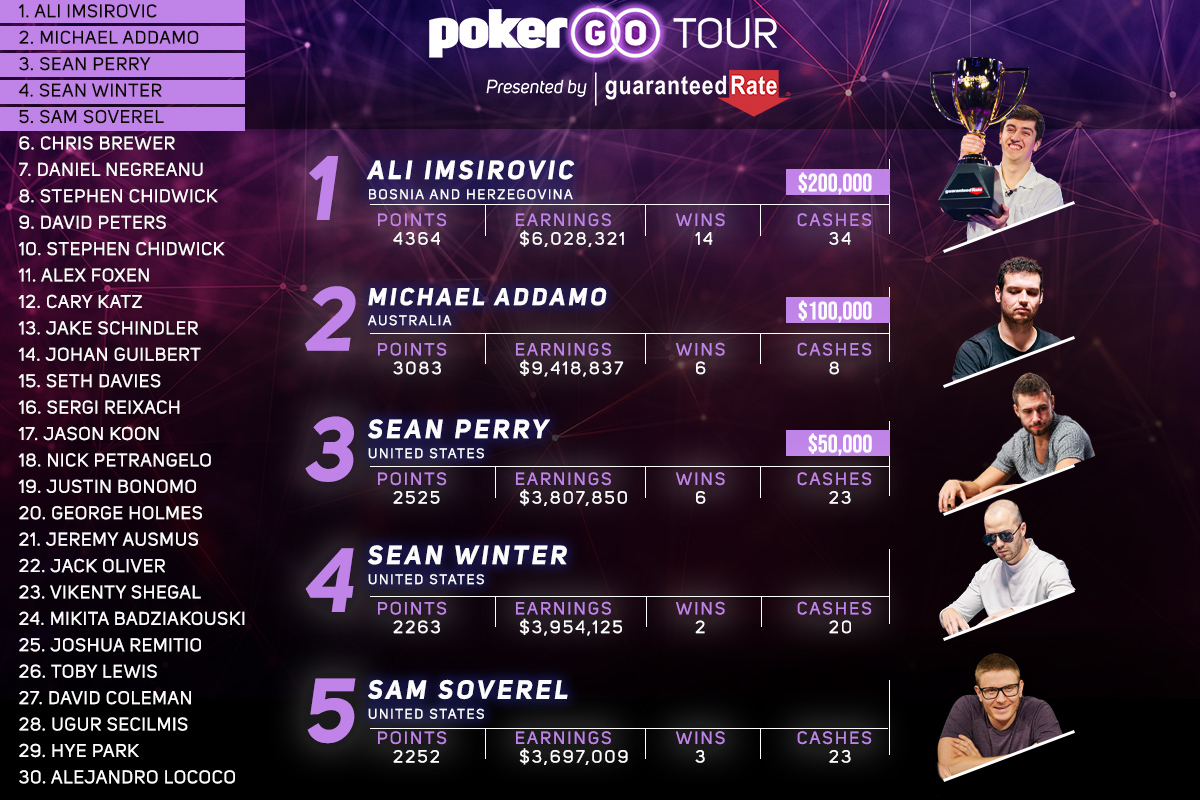 The inaugural season of the PokerGO Tour presented by Guaranteed Rate has come to a conclusion with Ali Imsirovic crowned the 2021 PokerGO Tour Player of the Year.

Imsirovic’s domination throughout the year saw him collect 14 wins, 34 cashes, and over $6 million in winnings on the way to amassing a total of 4,364 points – which was more than 1,300 points ahead of his competition. On the final day of the PokerGO Tour Championship, Imsirovic was awarded the Guaranteed Rate Cup and the $200,000 top prize.

“It still feels pretty surreal, to be honest,” Imsirovic said. “I never thought I would accomplish something of this magnitude in poker. Next, the goal is to just keep trying to get better and solidify and keep proving that I belong here.”

Australia’s Michael Addamo finished in second place with 3,083 points and collected $100,000 in prize money. Addamo spent only two months in Las Vegas playing high rollers, and in that time won six events which included two Poker Masters wins, a Super High Roller Bowl title, and two WSOP bracelets. During those two months, Addamo won over $9.4 million in prize money and climbed into 40th on the All Time Money List.

After going toe-to-toe with Imsirovic to start the year, Sean Perry inevitably finished third on the PokerGO Tour presented by Guaranteed Rate leaderboard and collected $50,000 in prize money. Perry won six events, cashed 23 times, and won over $3.8 million in prize money on his way to amassing 2,525 points.

Rounding out the top five included Sean Winter and Sam Soverel who both cashed over 20 times on the PokerGO Tour, while the top ten were filled with the likes of Chris Brewer, Daniel Negreanu, Stephen Chidwick, David Peters, and 2021 WSOP Main Event winner Koray Aldemir.

The 2022 PokerGO Tour will kick off at The Venetian Resort Las Vegas on January 5 with four high roller tournaments before the Stairway To Millions takes center stage as PokerGO’s newest event. The Stairway To Millions will see buy-ins ranging from $1,000 to $100,000 and there will be four PokerGO Tour qualifying events to conclude the series. The PokerGO Cup is slated to return in February along with the inaugural $25,000 PokerGO Heads-Up Championship and four ARIA High Rollers starting on February 24.