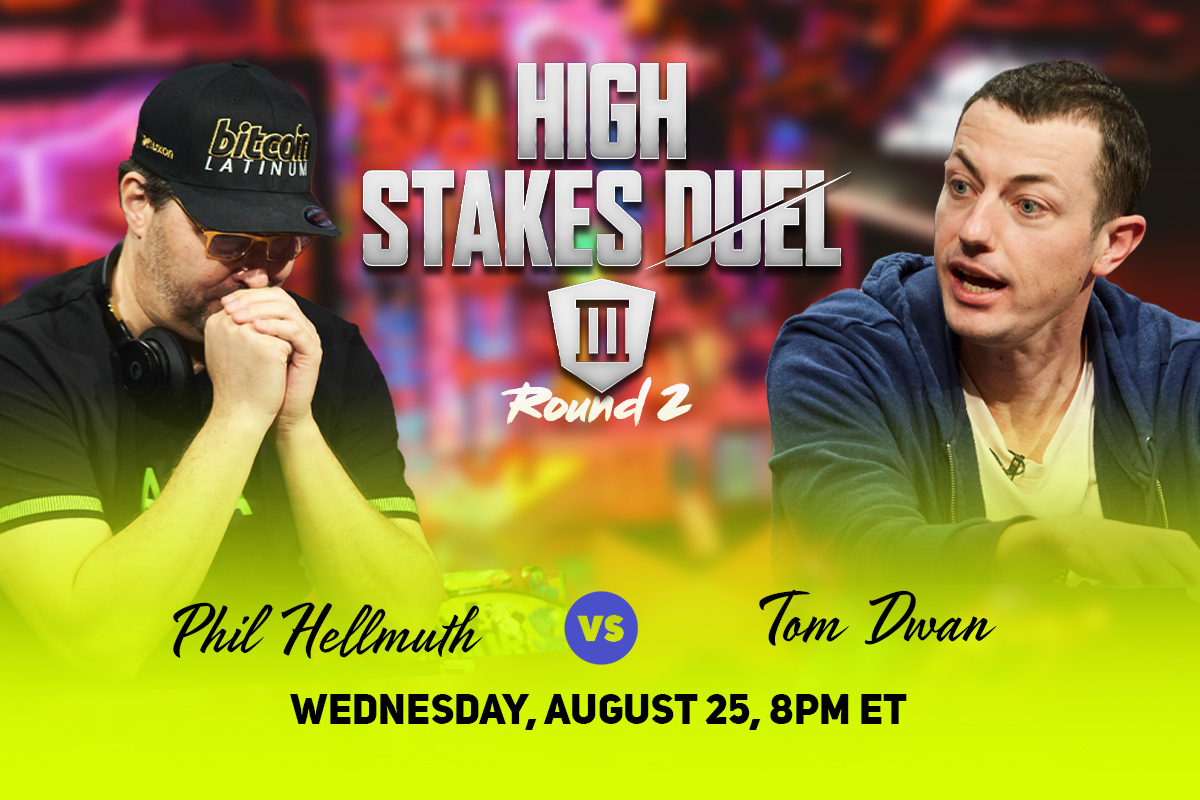 The long-awaited heads-up match between Phil Hellmuth and Tom Dwan is here. With Nick Wright electing not to challenge Hellmuth to a rematch after his first-round loss in High Stakes Duel III, Dwan has stepped up to the plate and will face Hellmuth for Round 2. Each player will be putting up $100,000, with $200,000 going to the winner.

The High Stakes Duel III Round 2 match between Hellmuth and Dwan is set to take place on Wednesday, August 25, at 8 p.m. ET from the PokerGO Studio in Las Vegas, Nevada.

In addition to trying to take a six-figure sum from Hellmuth, Dwan will be aiming to crack the High Stakes Duel streak that Hellmuth has been on. Hellmuth has won seven consecutive High Stakes Duel matches, dispatching of Antonio Esfandiari and Daniel Negreanu in three straight matches each, and then knocking out Wright after nearly six hours of play earlier this month.

Hellmuth and Dwan have a bit of history that does way back to 2008 at the NBC National Heads-Up Championship. Widely known as “durrrr” back then, Dwan cracked Hellmuth’s aces with pocket tens thanks to hitting a ten on the turn. The two exchanged some words following that match, with Dwan challenging Hellmuth to play heads-up for whatever stakes Hellmuth wanted. That match never happened, but now 13 years later we’re going to get these two poker juggernauts in the ring for High Stakes Duel III and a $200,000 match.

After his match against Wright, here’s what Hellmuth had to say about the possibility of his next opponent had Wright not challenged for a rematch.

“They told me after I beat Antonio [Esfandiari] that it was going to be [Phil] Ivey, and I said OK,” Hellmuth told PokerGO. “They said it was going to be [Tom] Dwan, and I said OK. You know, of all the people on the planet, Phil Ivey has held over me more, like when we’ve played tournaments together, I’ll have ace-king suited and he’ll have aces with seven left at the LAPC. Ivey has gotten away with a lot against me, and so had Antonio, and I relish playing people heads up who have beaten me a lot because at least I’m going to get to play them 600 hands and I’m going to get rid of that whatever you call it, you know, bit of unluckiness, right? Dwan or Ivey, whoever. Either one is fine.”

Can Hellmuth extend his streak to eight wins? Will Dwan be the one to finally knock off Hellmuth? Tune in on Wednesday, August 25, at 8 p.m. ET to find out and to see who is walking away with $200,000.