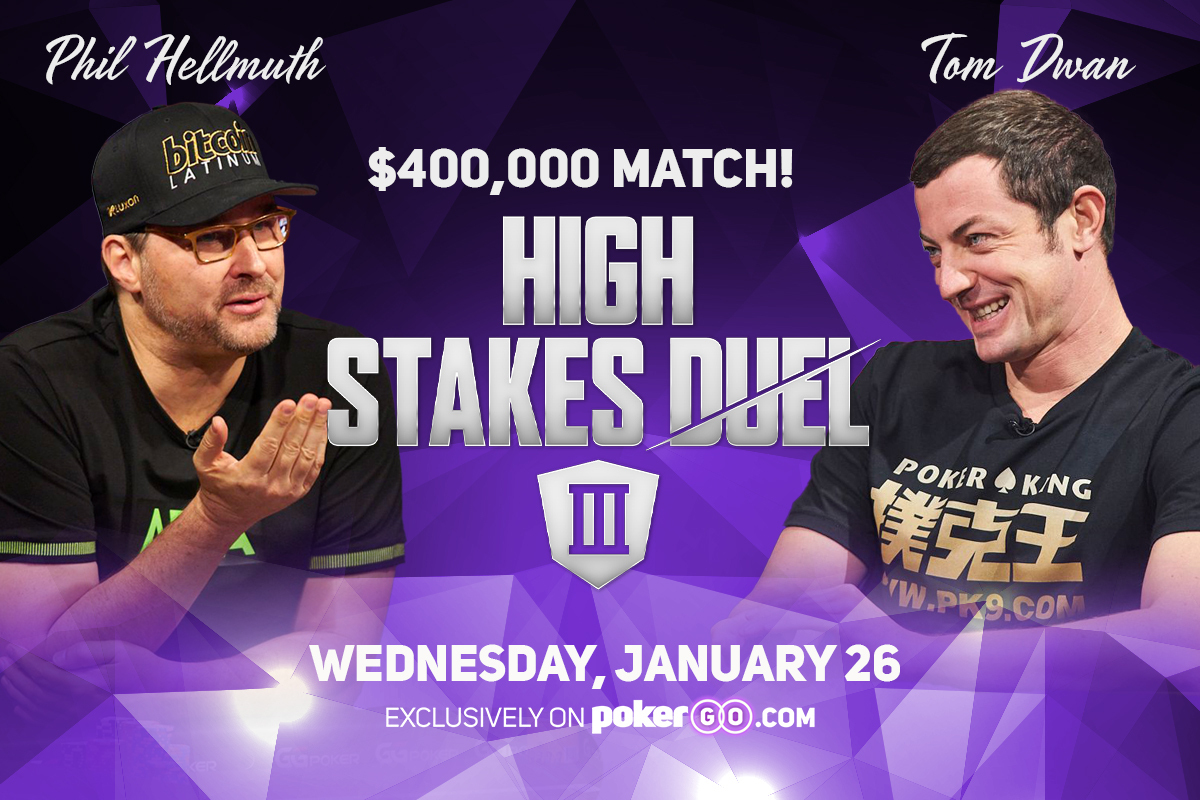 Phil Hellmuth and Tom Dwan, two of poker’s most iconic players with a competitive rivalry going back more than a decade, step into the High Stakes Duel ring at the PokerGO Studio in Las Vegas on Wednesday, January 26, 2022, for a $400,000 heads-up poker match.

The match will be broadcast on PokerGO.com on Wednesday, January 26, 2022, at 8 p.m. ET (5 p.m. PT). New subscribers can receive $20 off an annual PokerGO.com subscription by using the code “HSD3R3” at sign-up. The first hour of the match will be available for free on the PokerGO YouTube channel.

High Stakes Duel III Round 3 isn’t the first time Hellmuth and Dwan have battled in heads-up play. Their rivalry has been one of the longest and most high-profile in poker, with roots tracing back to 2008. After becoming an online poker phenom and rising to poker stardom, Dwan met Hellmuth in the opening round of the NBC National Heads-Up Poker Championship. Dwan cracked Hellmuth’s pocket aces with his pocket tens to send the “Poker Brat” into one of his patented rants. After words were exchanged between the two, Dwan challenged Hellmuth to play heads-up poker at any stakes. That match never took place, but the two would finally meet in High Stakes Duel III Round 2 to battle for $100,000 each.

Entering High Stakes Duel III Round 2, Hellmuth had won seven straight High Stakes Duel matches, defeating Antonio Esfandiari, Daniel Negreanu, and FS1’s Nick Wright in the process. As fate would have it, Dwan cracked Hellmuth’s aces to win the match and end Hellmuth’s impressive streak. After the loss, Hellmuth exercised his option to a rematch with Dwan. Under the rules of High Stakes Duel, the stakes double for the rematch. Hellmuth and Dwan will now go to battle for $200,000 apiece with the winner taking home $400,000.

The winner of this $400,000 Round 3 match will either face a rematch with the opponent or move on to battle with a new challenger at double the stakes. Per the rules of PokerGO’s High Stakes Duel, the stakes double with each round with the ultimate potential of an eighth round being played for $12,800,000 in prize money. A player can walk away victorious if they win three consecutive matches before Round 4 or two consecutive matches starting with Round 4.

Round 3 of High Stakes Duel III between Hellmuth and Dwan airs on PokerGO.com on Wednesday, January 26, 2022, at 8 p.m. ET (5 p.m. PT). New subscribers can receive $20 off an annual PokerGO.com subscription by using the code “HSD3R3” at sign-up. The first hour of the match will be available for free on PokerGO’s YouTube channel at youtube.com/PokerGO.