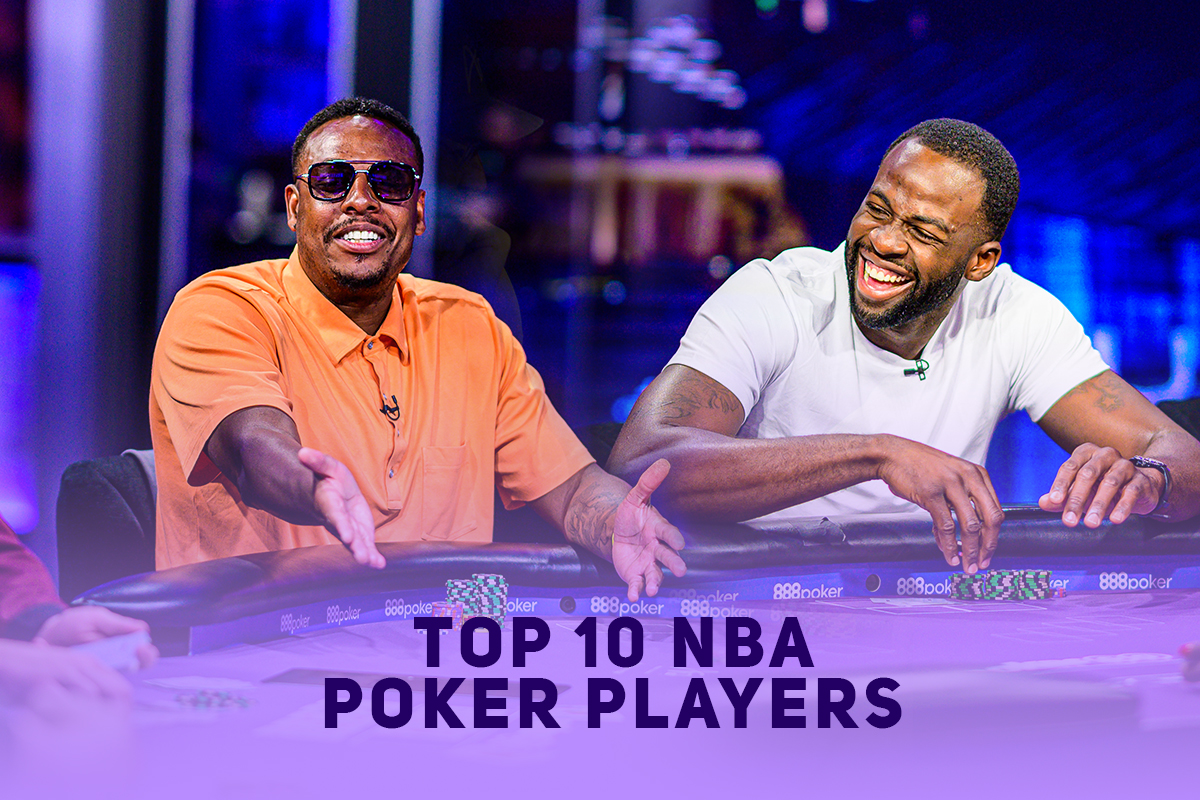 Breaking down the top NBA stars that can hold their own on the felt!

Both games are often played with just five opponents. Both games involve constant concentration and the ability to quickly turn play around in your favor. But is there more in common between the NBA and poker? You bet there is and we broke down some of the best on both sides!

Basketball and poker might not strike you as natural bedfellows, but in actual fact, there’s a historic association between one of America’s greatest sports and the mind sport of poker. Doyle Brunson might well have been an NBA player if it hadn’t been for an injury suffered in the early 1950’s.

But from the other side of the ringside seats, who might swap the hardcourt of the NBA for the soft felt of the poker table?

Paul Pierce is a basketball great, having been a professional for 19 seasons in the NBA. Pierce showed exactly why his nickname is ‘The Truth’ when he won a pot worth $40,000 at the start of the ‘GOAT Week’ on Poker After Dark.

Pierce had pocket jacks and took down the slam dunk of a hand on PokerGO as you can see:

The 29-year-old NBA power forward currently plays for the Golden State Warriors. Green, a three-time NBA champion has also been named as an NBA All-Star on three separate occasions, and two years ago in 2017, Green won the NBA Defensive Player of the Year accolade to add to his ever-bulging trophy cabinet.

Can he get a power bluff through Maria Ho, however? Check out this hand from Poker After Dark!

Chris Paul plays for the Oklahoma City Thunder since his trade there in July and has already won Rookie of the Year, an MVP award (Most Valuable Player, not Most Victorious Poker sessions) and even helped Team USA to two Olympic gold medals, first in the Beijing Olympics in 2008, then in London 2012. In both Olympic finals, Paul’s team was undefeated on their way to picking up the gold.

If that wasn’t enough success in his life so far, Phil Hellmuth even rates Chris Paul at poker. Multi-talented or what?

Seth Curry is the son of former NBA player Dell Curry, and just two months ago, Curry married former professional volleyball player Callie Rivers, who, in a strange twist of fate is the daughter of Doc Rivers, legendary NBA head coach her brother Austin is also an NBA player. Marrie to basketball? You bet for Seth Curry, though when he’s not shooting hoops, he likes to play cash games at ‘The Bike’, a.k.a. the Bicycle Casino and we are left wondering whether he’s gotten the best of his brother in some heads-up matches perhaps?

The former NBA star David Lee may have split his time in the NBA predominantly between two teams, the New York Knicks and the Golden State Warriors, but Lee is far more than the man who went East Coast to West in his NBA career. He also plays a mean game of poker and doesn’t keep his love of games to the felt, appearing on NBC’s Celebrity Apprentice too, back in 2009, as well as appearing on Family Feud in the NBA Players vs. Mothers episode. Sign him up for Jeopardy! now. Lee is also known to battle with Phil Hellmuth is both home games and in Chinese poker matches!

Russell Westbrook III to give him his full name, is an NBA legend. While he currently plies his trade for the Houston Rockets, Westbrook wore the colors of Oklahoma City Thunder for many years, 11 to be precise. Westbrook’s litany of awards from the game of basketball is incredible. He’s been an NBA All-Star eight times, and won back-to-back All-Star MVP Awards too, in 2015 and 2016. As if that wasn’t enough, Westbrook is second on the all-time list for triple-doubles in the entire history of the NBA. He’s married to his childhood sweetheart and they have three children, so stop hoping.

Oh, and he knocked Tiger Woods out of his own event. There’s nothing this guy can’t do!

Shawn Marion, known as ‘The Matrix’ was an incredible athlete, and while he played for several teams in his 16-year NBA career, he’ll be fondly remembered for his part in the Dallas Mavericks winning their first-ever NBA title in 2011.

Marion’s legendary shooting form and ability to be the most important player all over the court earned him many plaudits, with his flexibility – in both appropriate senses of the word – famed throughout the sport. As if his achievement in poker weren’t enough, he joined forces with Cedric Ceballos and took part in Season 30 of The Amazing Race, where the duo survived a rollercoaster first few weeks before being unluckily eliminated in ninth place. Marion’s poker chops are on record as he’s managed to get himself a HendonMob page along with some deep runs at the World Series of Poker where he’s unfortunately not managed to finish in the money to date.

Born in Belgium, the French-American superstar Tony Parker became an NBA champion in 2003, 2005, 2007 and 2014. His legend is quite something, being the all-time leader in assists for San Antonio, as well as being inducted into the Legion of Honor with the rank of Chevalier in 2007.

Just as important for his national team of France, Tony Parker also hosted a poker tournament with Eva Longoria in 2006. See, it didn’t all work out for him. In the past, Parker was affiliated with French poker site BetClic and played various live events.

With an interesting family line of Croatia via Australia, the Australian center Andre Bogut is a true legend of the game of basketball. Playing for the Milwaukee Bucks for seven years, he then traded to the Golden State Warriors and it was there that the 7-foot giant was named in the NBA All-Defensive Second Team in 2015 when he also won an NBA championship with the Warriors.

It says a lot that after leaving the NBA to head to his homeland to play for the Sydney Kings, he couldn’t resist the pull of the Golden State Warriors in 2019. Kirk Lacob joked at the time that Bogut was “the self-proclaimed best poker player in the organization.” We expect him on Poker After Dark very soon.

So we can now establish that Bogut plays poker with Klay Thomson, and plenty of other, on those internal flights between games. In Bogut’s own words, “They’re probably the guys that I had the closest bond with just because we play cards every flight.”

Poker brings people together and one of the best shooters in the NBA’s glorious history is no different, and we would love to be a fly on the wall to see who shoops the sharpest at the poker table during the Golden State Warriors home games.

While we had to look past them for the Top 10, we can’t talk poker and basketball without mentioning the legendary Haralabos Voulgaris who is an NBA sports bettor and now works for the Dallas Mavericks in their analytics department.

We’ve already mentioned Doyle ‘Texas Dolly’ Brunson’s ability on the court, but at courtside, Tony G once managed the Lithuanian basketball team and Jerry Buss, the late L.A. Lakers owner who was a huge poker fan, once cursed Johnny Chan. Well, kind of.

Buss told Chan in 1989 that if he were to win his third consecutive WSOP Main Event, then he would give him an NBA Championship ring. The man who beat him heads-up to deny him? Phil ‘The Poker Brat’ Hellmuth, that’s who.

Elsewhere, former NBA First Round pick Bobby Sura took to the PokerGO felt back in 2017, holding his own against such luminaries as former WSOP champion Jonathan Duhamel and WSOP bracelet winner Jeremy Ausmus.

You can catch up on every episode of Poker After Dark among other amazing shows by subscribing to PokerGO today. With 24/7 access to the world’s biggest poker events, such as this week’s Poker Masters, you won’t miss a thing if you subscribe, so why wait? It’s a slam dunk!