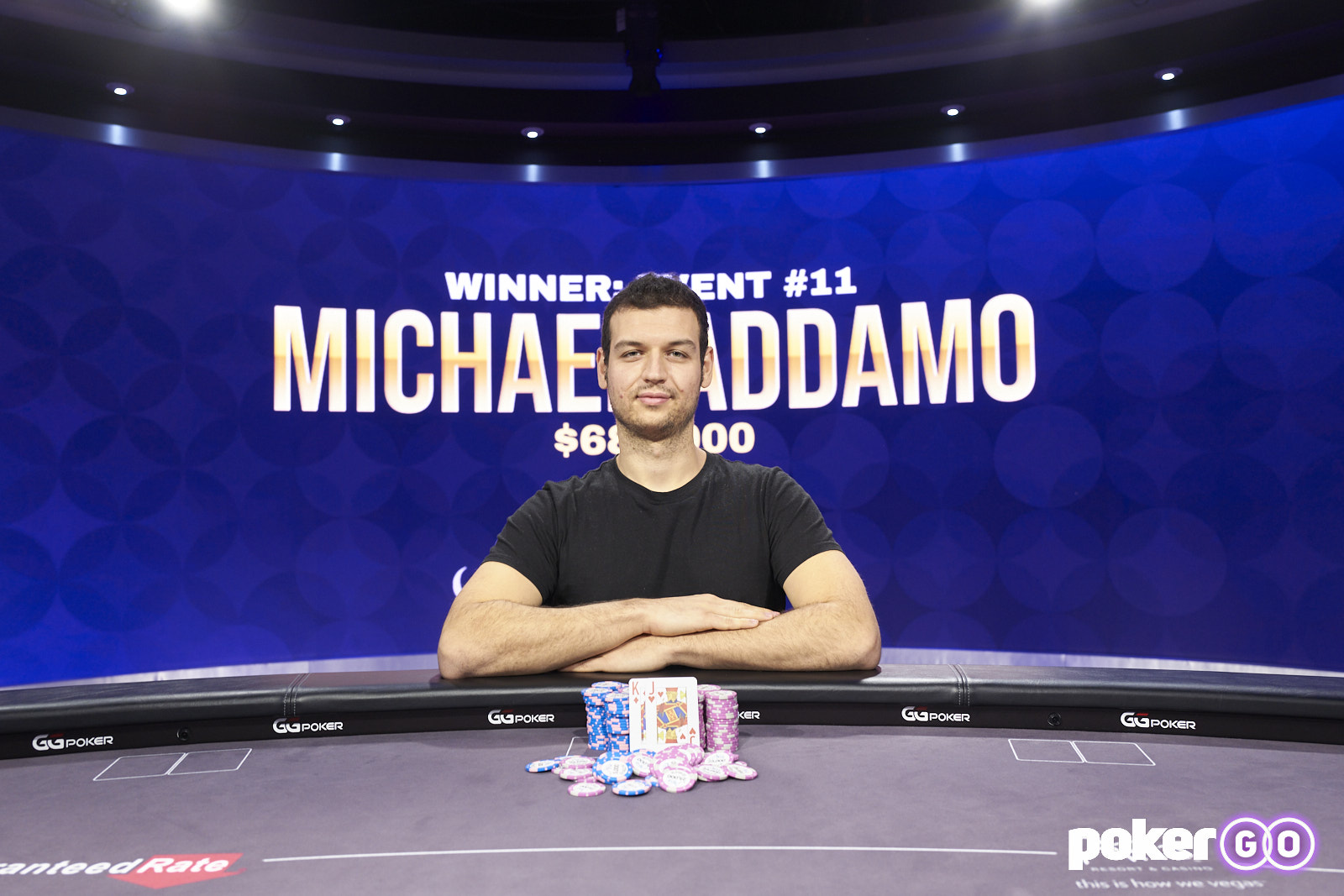 Event #11: $50,000 No-Limit Hold’em was only Michael Addamo’s second event of the 2021 Poker Masters, but he topped all competitors and won it for $680,000. Addamo bested the field of 34 entries to win the title, and with it he moved to the top of the series leaderboard.

“It was incredible,” Addamo said of going on to win after starting Day 2 with the chip lead. “I had a great stretch of hands and I pretty much had it the whole time on the final table, so I can’t credit it to any good bluffing skills. Just good fortune.”

Not only did Addamo enter the final day with the chip lead, but he eliminated all four of his opponents en route to winning the title. On each elimination hand, Addamo had the best of it and his hands held up on each occasion.

“It’s definitely a relief,” Addamo said. “Sometimes, and I know this is kind of stupid, but I almost feel bad for everyone else that I’m running good. It’s kind of nice, although it’s better when you play good, I guess.”

For Addamo, this victory isn’t his first huge score and it very likely won’t be his last. He’s one of the best players on the tournament scene and continues to impress more and more every year.

“I just want to keep playing the big buy-ins,” Addamo said when asked about what else he would like to achieve in poker. “The 100Ks-plus is really exciting stuff and obviously this one as well. I’d just like to keep going, battling it out with all of the other top guys, and see how we go.”

Addamo first knocked out Cary Katz in fifth place. Addamo had pocket kings against Katz’s pocket jacks and the kings held. Katz picked up a $119,000 payday for his fifth-place result.

After Katz, Alex Foxen hit the rail in fourth place. Foxen also busted at the hands of Addamo, with Addamo’s ace-king holding strong against Foxen’s king-jack. Foxen earned a payday of $187,000.

David Coleman was the next player eliminated, falling in third place for $272,000. Coleman was all in with queen-jack against Addamo’s pocket fours. Despite going to the river with two over cards and a double-gutted straight draw, Coleman whiffed and Addamo scored his third knockout in a row.

Addamo entered heads-up play with the chip lead over Jason Koon and he didn’t look back. On the final hand, it was Addamo’s king-jack holding up against Koon’s king-nine to give the Australian the victory. Koon cashed for $442,000.

With the win, Addamo moved to the top of the 2021 Poker Masters leaderboard with 408 points. There is only one event remaining on the schedule, Event #12: $100,000 No-Limit Hold’em, and we’ll have to wait and see if anyone can catch Addamo.