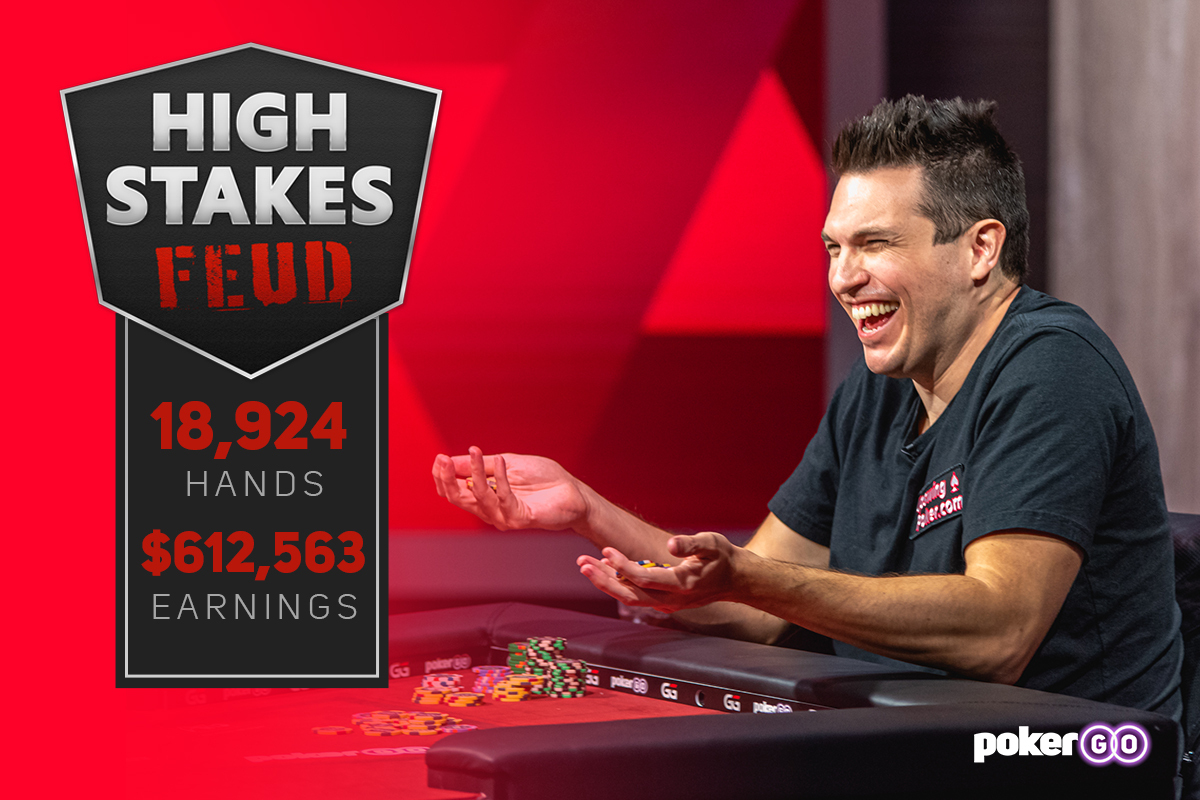 The ongoing High Stakes Feud between Doug Polk and Daniel Negreanu resumed in 2021 with Negreanu going on a five-session win streak before Polk managed to wrestle back the advantage with four winning sessions. Negreanu however would bag the biggest win of the series last Friday to be trailing Polk by $612,563.46 after 18,924 hands.

After beginning in the PokerGO Studio back in November 2020, High Stakes Feud eclipsed the halfway point as the year ended with Polk holding a lead of over $770,000. The five-session win streak of Negreanu last week would be followed by four winning sessions from Polk to push him to over $1 million in profit before a rally from Negreanu in the last session reduced his deficit to just over $600,000.

The 27th session of High Stakes Feud begun with Polk edging out into the lead early before Negreanu won a pot with pocket nines to see it return to even. Polk’s lead slowly pushed out towards a buy-in, and then after two river jams, his lead climbed to roughly $80,000. Negreanu then ran pocket queens into Polk’s pocket aces to be down over three buy-ins, before his next set of pocket queens would secure him a double when he was all-in on a jack-high flop against Polk’s king-jack. Negreanu then secured another double when his two pair held against Polk’s top pair as his deficit dropped below two buy-ins. Negreanu managed to bring the match to nearly even before Polk would go on a late heater which included turning a straight before the session ended after 600 hands with Polk winning $119,609.84.

Polk would jump out of the gate in the next session when he called Negreanu’s all-in on the turn with second pair and a flush draw to hold against Negreanu’s straight draw. Negreanu would win a series of pots to take back the lead of roughly a buy-in before Polk scooped a pot of nearly $120,000 when he called Negreanu’s bluff on the river with two pair. The two continued to exchange the lead back-and-forth before concluding the session after 600 hands with Polk securing the victory for $26,198.60.

Last Monday would be the 29th session between the two saw Polk move out to the early lead when he went uncalled to an overbet river shove. Negreanu would then see his two pair counterfeited on the river as Polk dragged another big pot. A series of pots began to go Negreanu’s way before a bluff with a straight draw swung the match back in Polk’s direction. Negreanu then five-bet all-in preflop with pocket jacks and Polk called with ace-king and spiked an ace on the turn to move into the lead before forcing another rebuy from Negreanu when he shoved the river with top pair but Polk had him outkicked. On the opposite table shortly after, Polk would be prompted to rebuy when he rivered top pair and called all-in against Negreanu’s two pair to see the match return to even. Polk would drop to being at roughly a $60,000 deficit before mounting a comeback that included him shoving $133k into a pot of $60k on the river as Negreanu folded, and then dragging pot-after-pot before the session ended after 608 hands with Polk winning $73,728.29.

Negreanu began Wednesday’s session with the early lead when he rivered a full house against what Polk would later reveal to be his pocket queens. Down roughly a buy-in, Polk would erase that deficit after winning a flip with pocket jacks against the ace-queen of Negreanu. Polk’s lead would surge to nearly $200,000 before his bluff would be picked off by Negreanu’s flopped top pair. However, Polk would surge way out ahead when he bet-called Negreanu’s shove on the turn with Polk holding second set, and Negreanu holding a flush draw. Negreanu bricked the river and Polk furthered his lead to over $300,000 before the session concluded after 770 hands with Polk winning $298,984.83.

With Polk now moving out to an overall lead of $1,002,595.59, the final session of the week played out on Friday, and it would be Polk continuing where he left off on Wednesday as he powered out to a session lead of a buy-in. Negreanu found a double when he shoved with two pair on the river and Polk called with king-high before he opted to bluff a bricked straight and flush draw and Negreanu called with top pair to hold an advantage of roughly $50,000. Negreanu then found a huge double by scooping a pot of $140,000 when he turned a straight against Polk’s top pair as all the money went in on the river. Negreanu now sat with a lead of roughly $145,000, and after some back-and-forth between the two, Polk would run pocket eights into Negreanu’s pocket jacks to increase that lead to roughly $220,000. Polk would be forced to rebuy once again when he was all-in on the turn with a flush and straight draw against Negreanu’s top pair. The river bricked, and Negreanu surged out to a lead of $300,000. The final big hand of the session saw Negreanu go runner-runner full house against Polk’s flopped two pair before the session ended after 1,046 hands with Negreanu winning $390,032.13 – the record for most hands in a single session, and biggest result.

With 31 sessions now complete, 18,924 hands have been dealt of the 25,000-hand quota in High Stakes Feud. Polk holds a lead of $612,563.46 over Negreanu as Poker Central will continue to provide weekly updates of all the High Stakes Feud action until a winner is crowned.