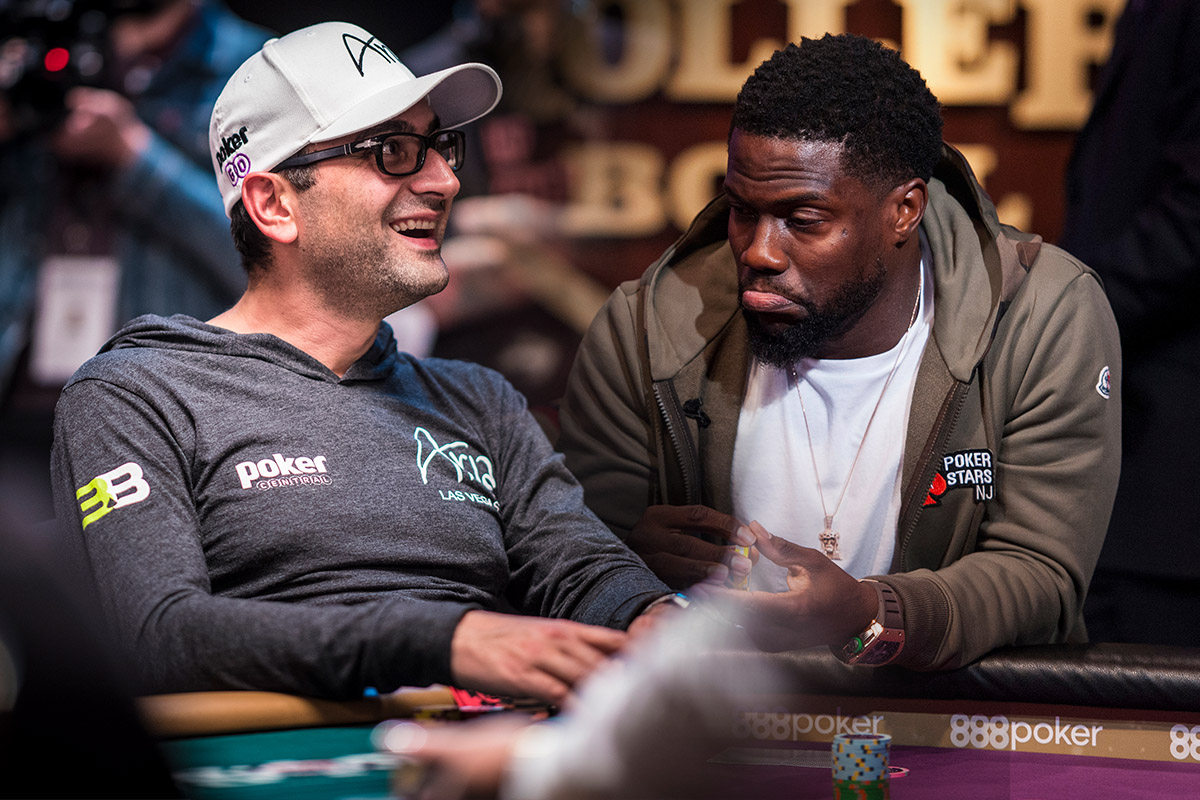 Antonio Esfandiari beat Kevin Hart in a 35:1 boxing match! Learn all about it in the article below!

For most people, the thought of jumping into a boxing ring with Kevin Hart would appeal as much as arriving one minute after late registration ends at their favorite poker tournament. Antonio Esfandiari is not most people. But what made the former Big One for One Drop winner don the boxing gloves and go through seven months of training?

“The gambling aspect of it!” laughs Esfandiari when Remko Rinkema and Brent Hanks caught up with him on this week’s Poker Central Podcast. “When someone offers you 35:1 on something, how do you not take it?”

COACHED BY AN OLYMPIAN

Not all of us can call upon an Olympic superstar to put us through our paces during our gym workouts. But when Great Britain’s gold medal winner from the 2000 Olympics, Audley Harrison, got in touch, Esfandiari was all ears. Harrison, who defeated Kazakhstan’s Mukhtarkhan Dildabekov back in 2000 to claim gold, became Esfandiari’s coach and mentor.

“He was such an amazing coach, He had my whole program from Day 1 for seven months. It was a very scientific approach.”

For seven months, Esfandiari trained four or five times a week, and claims now that ‘40 never felt so good.’ He also had to reduce the vices that he’s enjoyed partaking in his whole adult life. Not only did he have to maintain his diet and have sleep precisely when Harrison said so, but he also needed to avoid sex for three weeks prior to the fight and alcohol almost exclusively during training.

“My alcohol intake for seven months was so minimal. They told me: ‘We’re timing it so that you peak on the week of the fight.’ I wanted to give myself the best chance.”

Some pics from an epic battle on Sat between @kevinhart4real and myself. Kev you are a special person my friend. So much love and respect for you. This was one of the top 5 most incredible experiences of my life. Walking into that ring to face you with gloves on is a rush I can't explain. Definitely the closest I've come to feeling like a manly man! So much respect to all the boxers out there. Major thank you to my boxing coach @audleyharrison who led me on this journey from the start. You were an incredible coach amigo. So much love for you. Major props to my sparring partner @viloriaboxing for putting in so many sessions with me. You are an absolute beast! TY @dopepickwan for the pics.

IT’S NOT ABOUT THE MONEY

Although there were plenty of wagers at 35:1 on Antonio, Kevin Hart went into the bout as a huge favorite. But as Esfandiari admits, it was never about what he could win outside the ring.

“Money wasn’t the motivating factor at all. It’s nice but when you play high stakes, it’s one session.”

Hart was all about the banter in the months leading up to the fight, and they instilled plenty of nerves in Esfandiari.

“Kevin talked a lot of smack. He kept saying ‘Why are you inviting people to your funeral? I’m gonna destroy you!’ Now [I have] bragging rights for the rest of my life. It was very nerve-wracking, but as the fight started, I thought ‘I can actually do this’.”

Two weeks ago today two buddies put their gloves on and did what most people only talk about doing. We boxed our asses off. In the end the judges ruled in my favor but it was a close match. I can sit here and try to explain how surreal this entire experience felt but I would not be able to get the message across. I dedicated 7 months of my life to training for 9 minutes of boxing. The 35 to 1 I got layed was quite the motivating factor!!! Major props to @kevinhart4real for being one tough opponent and one heck of a sport. Nothing but love for you brotha!! Swipe left for full video

HOW ABOUT THAT REMATCH?

Esfandiari sparred against a boxer who is Kevin Hart’s size for seven months, claiming he would often ‘Stand back and let the punch whistle past my nose’. But when it came to the fight, the masterplan worked.  Esfandiari goes into detail about exactly how in full to Remko and Brent and it’s an incredible story worthy of the next Rocky film. As for whether it will happen again in a rematch?

You can catch up on just where it ranks in Esfandiari’s greatest ever winning feelings – including his first WPT title and that famous One Drop victory – in the full podcast episode, as well as finding out what sort of WSOP schedule he might be playing this summer.

As well as the interview with Esfandiari, Remko and Brent take a look at the Triton Super High Roller Series which just wrapped in Montenegro and featured yet another win for one of the players of 2019, Bryn Kenney. Can Kenney hold off Jungleman’s charge in the Power Rankings? You’ll have to listen to find out!

Subscribe to the podcast as well as PokerGO to not miss a single minute of the upcoming 50th Anniversary World Series of Poker starting on May 29th, 2019!