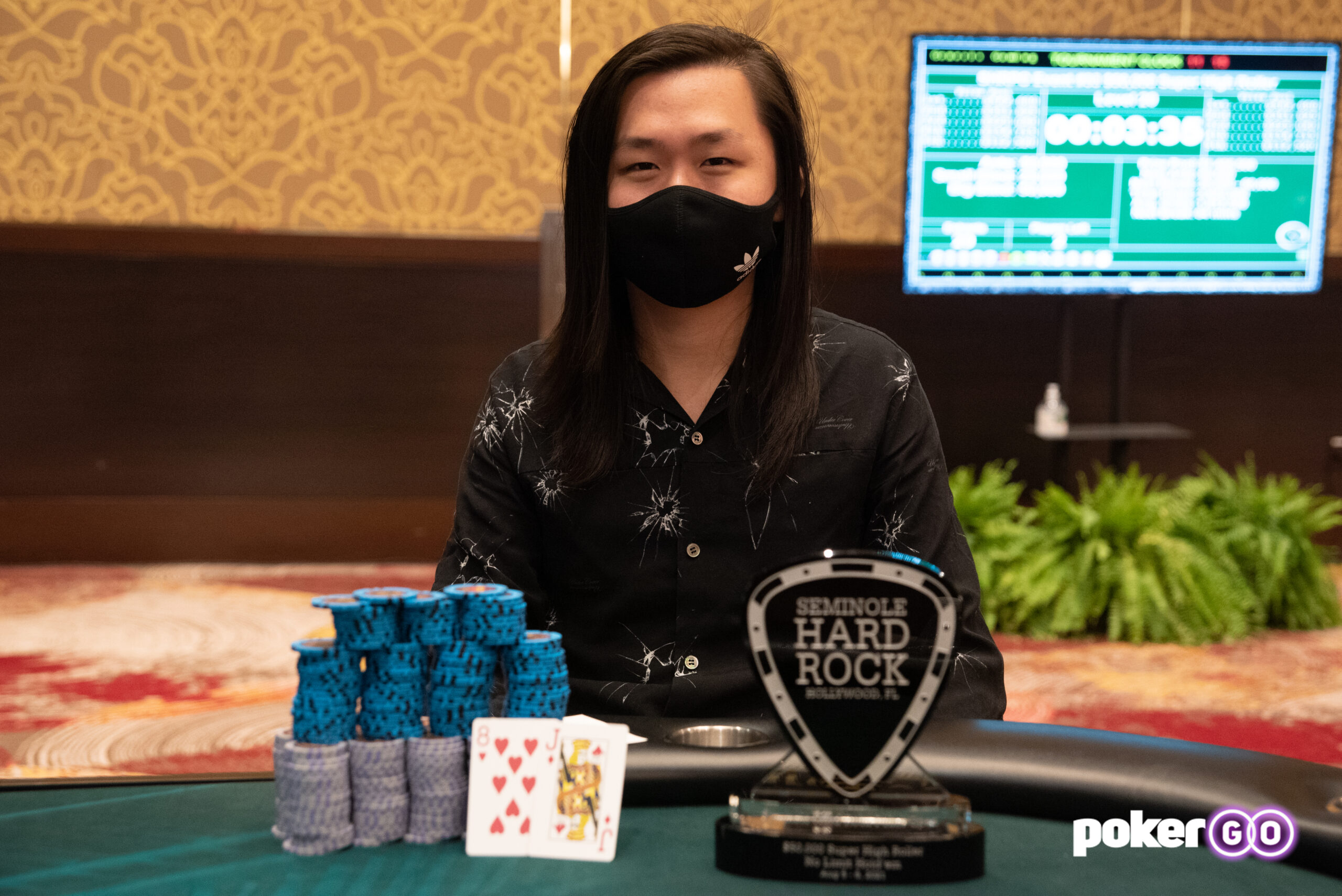 Event #33: $50,000 Super High Roller is all over from the 2021 Seminole Hard Rock Poker Open. After playing around 14 hours on Day 1 and another three hours on Day 2, 20-year-old Zhuang Ruan (pictured) emerged victorious atop the 29-entrant field to claim the $562,600 first-place prize. In the final duel, Ruan defeated Dan Smith in heads-up play.

Six players remained to start Day 2, and it was Smith and Ruan one-two in chips. These two found themselves pitted against one another in heads-up play following the eliminations of four others.

With five places making the money, one player would need to bust and become the “bubble boy.” That ended up being David Peters when his pocket eights lost to Smith’s ten-four of spades. Next to go was Sean Perry in fifth place, picking up $112,520 for his run. Smith also busted Perry and further increased his chip lead. For Perry, the result followed his fourth-place finish in Event #29: $50,000 Super High Roller for $139,680 at this Seminole Hard Rock Poker Open series.

Out in fourth place was Giuseppe Iadisernia, picking up a payday of $154,715 after he busted next. Iadisernia lost most of his chips when Cary Katz doubled through him and then Ruan finished Iadisernia off shortly thereafter.

Katz eventually lost out to Ruan and it took a bit of unluckiness to send him to the rail in third place when his ace-jack lost to Ruan’s ace-eight. Ruan hit an eight on the flop and held from there. Katz won $225,040. Like Perry, Katz also cashed in Event #29: $50,000 Super High Roller, finishing third for $209,520.

Ruan held the chip lead to start heads-up play, with 2.1 million to Smith’s 1.525 million. It didn’t take long for Smith to make his way to the lead and he even worked Ruan down to fewer than 1 million in chips. Ruan battled back, though. He picked off a bluff from Smith in a sizable pot that knocked Smith down to around 700,000 in chips and then things ended soon after.

On the final hand, Ruan jammed the river with trip jacks and Smith called it off with two pair. Smith’s hand was no good and he picked up $351,625 for his runner-up performance.

As for the PokerGO Tour presented by Guaranteed Rate leaderboard, Perry once again picked up some points to narrow the gap between him and the leader, Ali Imsirovic, but Imsirovic still maintains a comfortable lead. Katz jumped over Sam Soverel in a move from fifth place to fourth place.

That concludes PokerGO’s coverage of Event #33: $50,000 Super High Roller. Next up for our coverage is the $15,000 High Roller starting on Sunday, August 8. Be sure to tune back in then for coverage from the tournament floor.