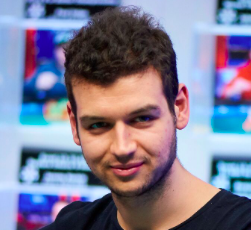 Australian Michael Addamo has emerged as one of the best online and live tournament players in the world having amassed more than $13.5 million in lifetime tournament earnings. Addamo has won two World Series of Poker bracelets, several high roller tournaments, and multiple online titles. At the 2020 Australian Poker Open, Addamo won the AU$100,000 Main Event for AU$1,288,000, and most recently he won two 2021 Poker Masters titles and was awarded the 2021 Poker Masters Purple Jacket before winning Super High Roller Bowl VI for $3,402,000 in prize money.

Tim Duckworth - May 27, 2022 The second season of the PokerGO Tour (PGT) continues with 75 events now complete following Triton Madrid. With 13 events at Triton Madrid, the entire PGT leaderboard has been shaken up with over 21,000 PGT points being awarded to 66 players as over $44 million in prize money was awarded. Stephen Chidwick was the biggest…

Tim Duckworth - December 22, 2021 The inaugural season of the PokerGO Tour presented by Guaranteed Rate has come to a conclusion with Ali Imsirovic crowned the 2021 PokerGO Tour Player of the Year. Imsirovic’s domination throughout the year saw him collect 14 wins, 34 cashes, and over $6 million in winnings on the way to amassing a total of 4,364…

Donnie Peters - December 21, 2021 With 14 victories, 34 cashes, and more than $6,000,000 in prize money won, Ali Imsirovic is named the 2021 PokerGO Tour presented by Guaranteed Rate Player of the Year. Imsirovic won the award thanks to a dominating year-long effort, and with the title comes $200,000 in prize money on behalf of the PGT’s sponsor, Guaranteed…
All Michael Addamo articles...