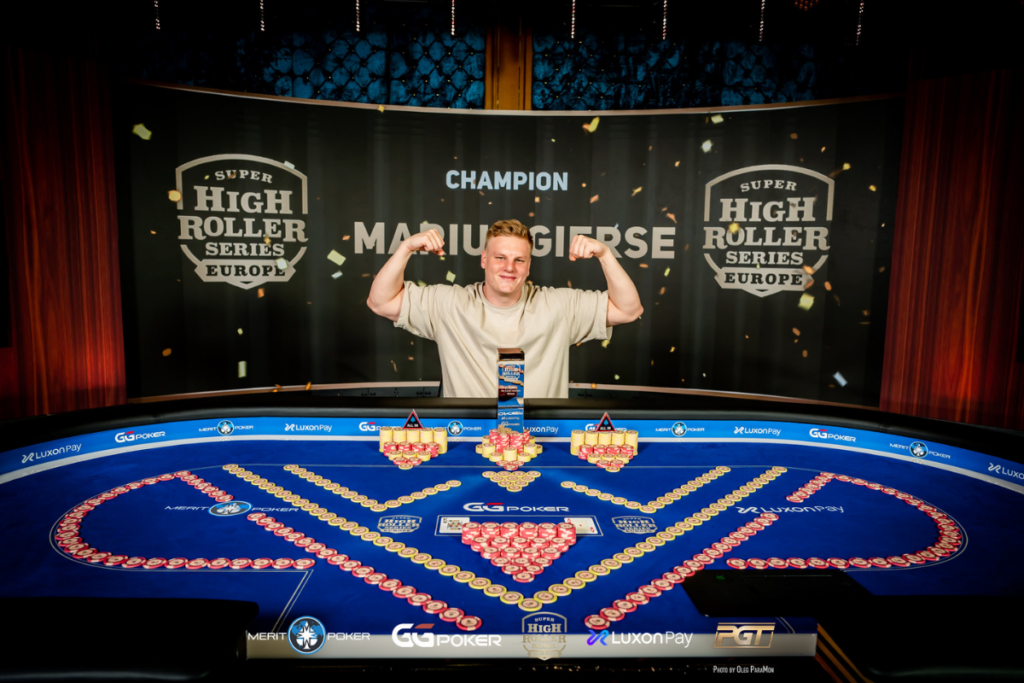 Gierse entered Day 2 of the event dead last in chips with nine players remaining. Despite starting at the bottom of the table, Gierse was able to turn things around and go on to score a victory.

At the final table, Gierse battled with Danny Tang in heads-up play and came out on top. He also had to get through Jason Koon and Ali Imsirovic. Koon finished third and Imsirovic took fourth.

Event #3 of Super High Roller Series Europe took place at Merit Royal Hotel Casino & Spa in North Cyprus. The final table was live-streamed on PokerGO’s YouTube channel. The tournament had a $25,000 buy-in and drew 64 entries to the felt, generating a prize pool of $1,600,000. The top 10 finishes reached the money, with all players to cash earning PGT leaderboard points in addition to their cash prize.

Gierse’s Road To Victory in Event #3

Although Marius Gierse began the final table with the shortest stack, he was pretty active early on and doing his best to fight for chips. After about an hour and a half of play, Gierse found a double up through Ali Imsirovic when his ace-king beat Imsirovic’s pocket nines.

Liviu Ignat fell in fifth place and Imsirovic went out in fourth to set up three-handed play between Gierse, Danny Tang, and Jason Koon. It was during three-handed play that Gierse found a double through Tang when his pocket kings beat Tang’s king-jack. Then Tang knocked out Koon in third place to set up heads-up play.

On the final hand, Tang was all in preflop with ace-two against Gierse’s dominating ace-king. Tang flopped a flush draw but couldn’t improve and was left with a second-place result.

On the 2022 Super High Roller Series Europe leaderboard, Jason Koon climbed to fourth place with 700 points after his third-place finish in Event #3: $25,000 NL Hold’em. Andras Nemeth increased his point total to 738 points and still remains in second place. It remains Phil Ivey on top with 1,341 points. 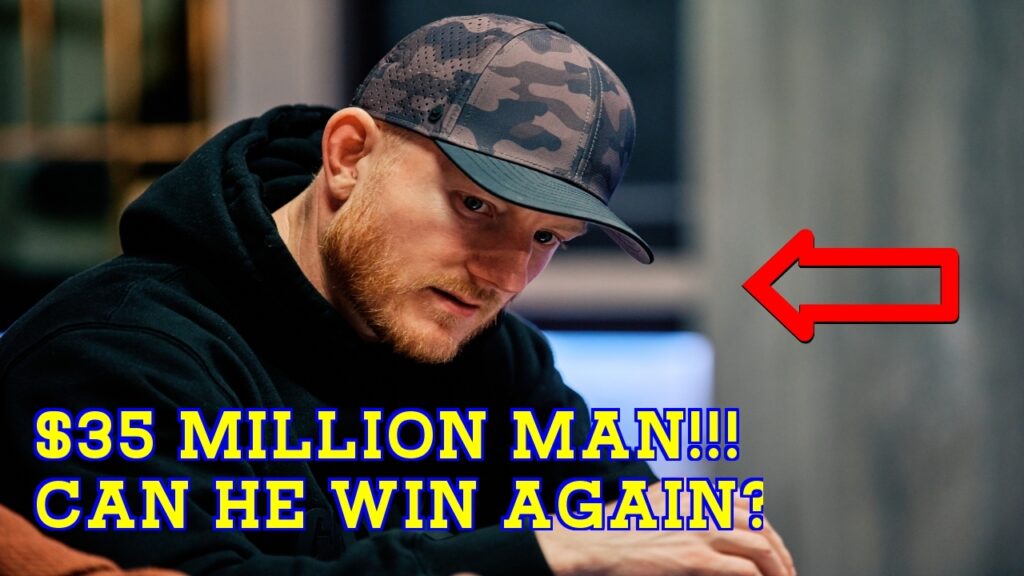 Event #3: $25,000 No-Limit Hold’em of the 2022 Super High Roller Series Europe is down to the final nine players with the final table airing on PokerGO’s YouTube channel.

Danny Tang finished Day 1 as the chip leader with 1,885,000 in chips ahead of Liviu Ignat and Matthias Eibinger. The final nine players have all locked up $64,000 in prize money, while all eyes remain on the $432,000 first-place prize.

The final nine players will return to the Merit Royal Hotel Casino & Spa on Sunday, April 10, at 1 p.m. local time with the final table airing on the PokerGO YouTube channel at 7 a.m. ET / 4 a.m. PT with David Tuchman and Brent Hanks on commentary. 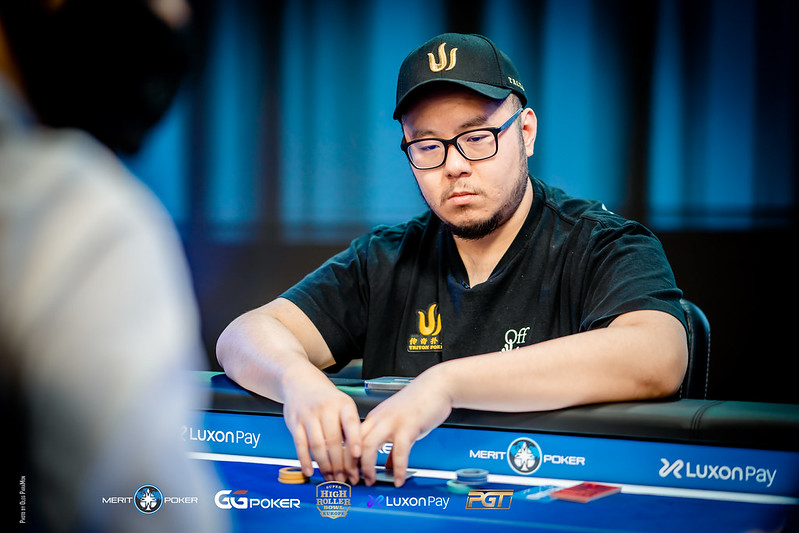 Hong Kong’s Danny Tang ended the day as the chip leader with 1,885,000 in chips ahead of his closest rivals with Liviu Ignat amassing 1,100,000 in chips, and Matthias Eibinger finishing with 1,005,000. There are nine players remaining with the players having locked up $64,000 in prize money, while all eyes remain on the $432,000 first-place prize. Once the final table is reached, Event #3 will conclude on Sunday, April 10, with the action being live-streamed on PokerGO’s YouTube channel.

PGT regulars Nick Petrangelo, Jake Schindler, Michael Addamo, Johan Guilbert, Cary Katz, Chris Brewer, Rok Gostisa, and Stephen Chidwick were all eliminated throughout the day, along with Super High Roller Series Europe winners including Phil Ivey, Tuen Mulder, Tom Vogelsang, and Mikita Badziakouski. Once the field was down to the final 11 players, it would be two-time Super High Roller Bowl champion Timothy Adams eliminated on the money bubble when his ace-nine was outdrawn by the queen-ten of Tang that rivered a straight.

Play continued with Sirzat Hissou being eliminated in 10th place for $48,000 before play was halted for the evening with nine players remaining and the final table in sight. Leading those players is WSOP bracelet winner Danny Tang who amassed a commanding chip lead with 1,885,000 in chips. Triton Cyprus Event #6 winner Matthias Eibinger sits third overall with 1,005,000, while the current leader on the PGT sits fourth overall as Ali Imsirovic locks up his third cash of the series and 15th for the year. Triton Cyprus Event #1 champion Andras Nemeth sits fifth overall, while other notables still in contention include Jason Koon and Super High Roller Bowl Bahamas champion Daniel Dvoress.

The final six players will return to the Merit Royal Hotel Casino & Spa on Sunday, April 10, at 1 p.m. local time with the final table airing on the PokerGO YouTube channel at 7 a.m. ET / 4 a.m. PT with David Tuchman and Brent Hanks on commentary.

and Hissou checked to Ignat, who moved all in. Hissou had under 200,000 left and smelled trouble, but he couldn’t get away from the

. Unfortunately for him, Ignat held the

Danny Tang shoved from the small blind and Timothy Adams had a tough decision. He looked around the table, eyed stacks of Sirzou Hissat and Marius Gierse. Then he double-checked that the hand on the other table has finished.

Adams burned two timebanks and then called for 445,000.

The board rolled out

and Tang rivered a straight to eliminate Adams on the bubble.

Chip Counts at the Break

Ali Imsirovic raised to 50,000 under the gun and Matthias Eibinger three-bet all in from the big blind, having Imsirovic covered. Imsirovic had a premium and quickly called for 365,000 total.

Imsirovic locked it up on the turn of the

board and doubled up.

Imsirovic subsequently added a little more to his stack before the players headed for a 15-minute break.

“Ay, ay, ay,” Nemeth said. He burnt a timebank and then called.

“I can’t help it. I can’t help myself,” Ivey said after turning up his hand, and the other players at the table laughed.

Nemeth won the race on the

board and Ivey was knocked out in 12th place, bringing the tournament on the bubble. 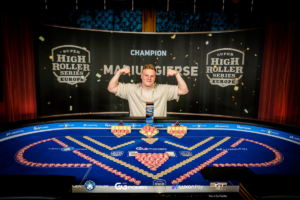 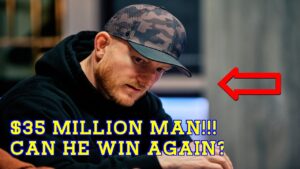 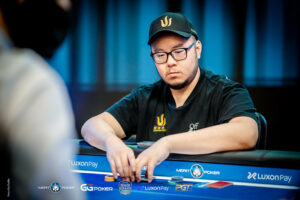 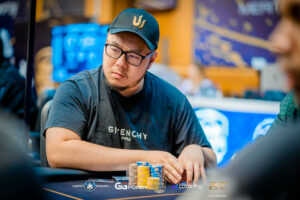 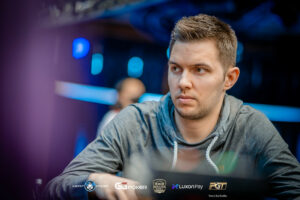 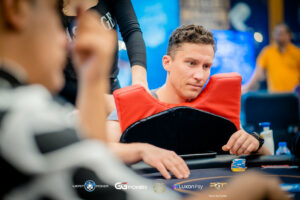 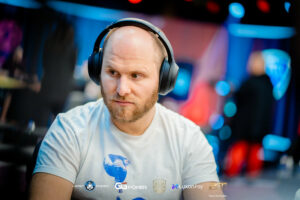 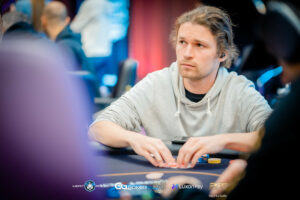