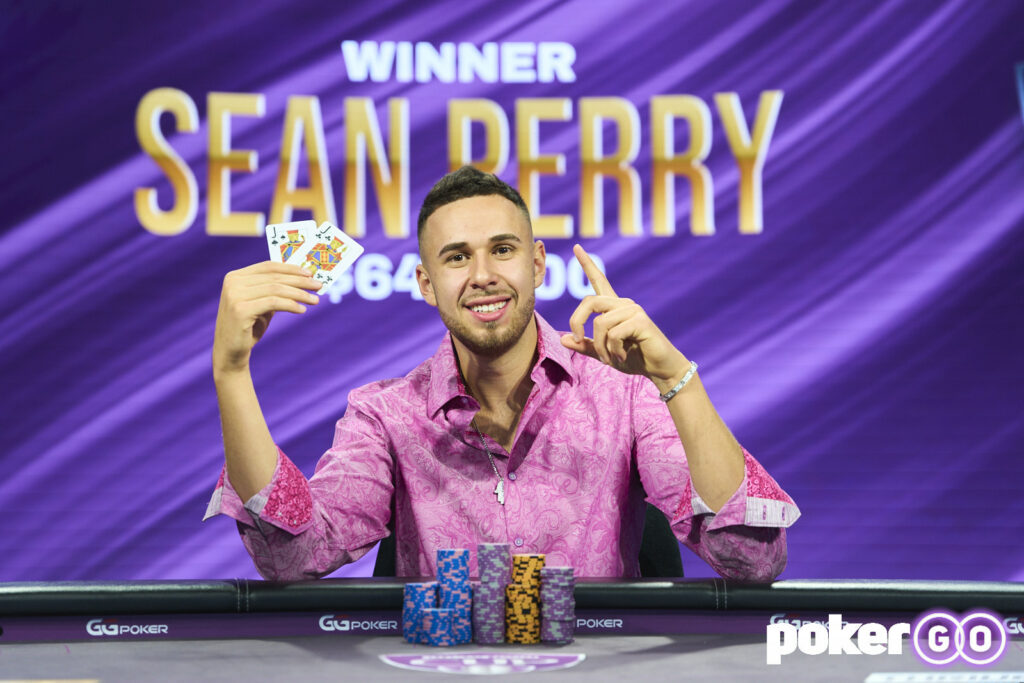 Although Perry didn’t win the overall PokerGO Cup title, he did pick up 384 points for the 2022 PGT leaderboard and now sits second behind Nick Petrangelo. Last season, Perry finished third behind Ali Imsirovic and Michael Addamo on the 2021 PGT leaderboard.

With Perry topping Brock Wilson in heads-up play, Jeremy Ausmus was crowned the 2022 PokerGO Cup series champion, which came with a $50,000 championship bonus. Ausmus cashed four times, with one win, one second-place finish, and one third-place finish, including finishing behind Perry and Wilson in the final event.

The final event of the 2022 PokerGO Cup was Event #8: $50,000 No-Limit Hold’em. It drew a field of 32 entries, creating a prize pool of $1,600,000. The top five finishers reached the money, and all five of them came into the final day of play in contention to win the series title. Perry started with the chip lead on Day 2 and went on to win, with Ausmus’ third-place finish good enough to get him the cup.

To read more on Perry’s victory, check out the full recap on PGT.com. 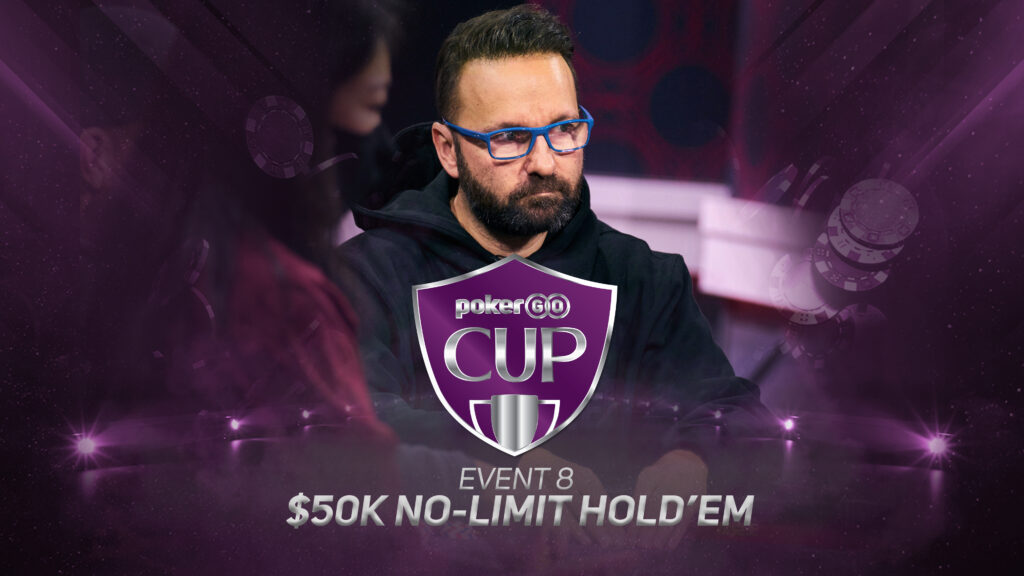 Sean Perry is the chip leader with 2,780,000 in chips ahead of Brock Wilson, Daniel Negreanu, Nick Schulman, and Jeremy Ausmus. The final five players are guaranteed $112,000 in prize money, while all eyes are on the $640,000 first-place prize.

All five players are in contention to win the PokerGO Cup and $50,000 championship bonus. Ausmus is currently leading, while each player has particular scenarios to ensure they are crowned the 2022 PokerGO Cup champion.

When play resumes, Level 14 will continue with 33:30 remaining and the button is in seat 4 and there is a dead small blind. 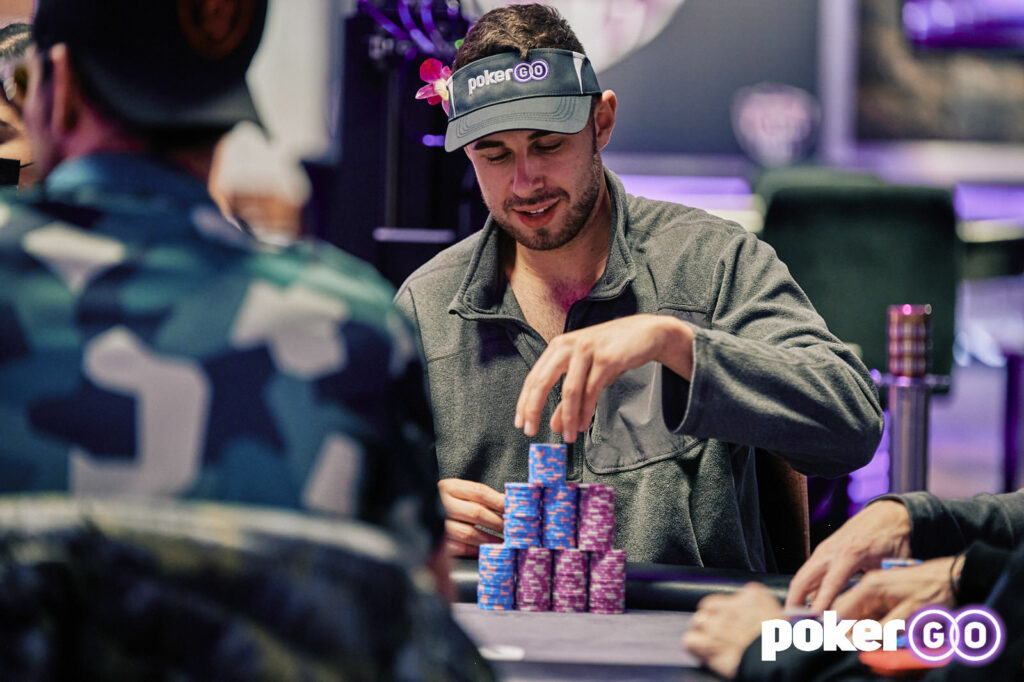 Perry took the chip lead late in level nine when he eliminated Nick Petrangelo in 12th place in over a 1.6 million chip pot. Petrangelo four-bet all-in for approximately 800,000 from the big blind only to get snap-called by Perry in the small blind holding ace-king. An ace on the flop was no help to Petrangelo, and Perry held the better kicker to take the chip lead and never look back.

Ausmus sits in prime position to dethrone Negreanu as the current points leader needs a second place or higher finish to lock up the cup but is currently the short stack with just 640,000, good for 21 big blinds. Schulman and Negreanu must win the event to claim the prize, and Ausmus can finish no higher than fifth. Perry needs a win and Ausmus to finish no higher than fourth. Wilson needs a win and to play anyone other than Ausmus heads up to keep his hopes of the PokerGO Cup alive.

For the second day in a row, Jason Koon found himself all-in on the money bubble, but unlike the day before, when Koon ran queens into kings, he found himself in a flip for his tournament life, holding pocket fours against the ace-seven of Negreanu. The flop and turn kept Koon in front, but when the river landed, the ace of clubs Negreanu made the higher pair to eliminate Koon and send the players to the money and a bag.

Other notables to make a deep run but failed to find a cash included Alex Foxen in 7th, Sean Winter in 8th, Thomas Winters in 9th, Sam Soverel in 10th, and Darren Elias in 11th.

When play resumes, Level 14 will continue with 33:30 remaining and the button is in seat 4 and there is a dead small blind.

The final five players will return to the PokerGO Studio on Thursday, February 10, at 1 p.m. PT with the final table airing on PokerGO.com at 2 p.m. PT.

The play has been suspended for the evening, and the final five players will return to the PokerGO Studio on Thursday, February 10th at 1 pm PT, with the final table stream starting on PokerGO.com at 2 pm PT. 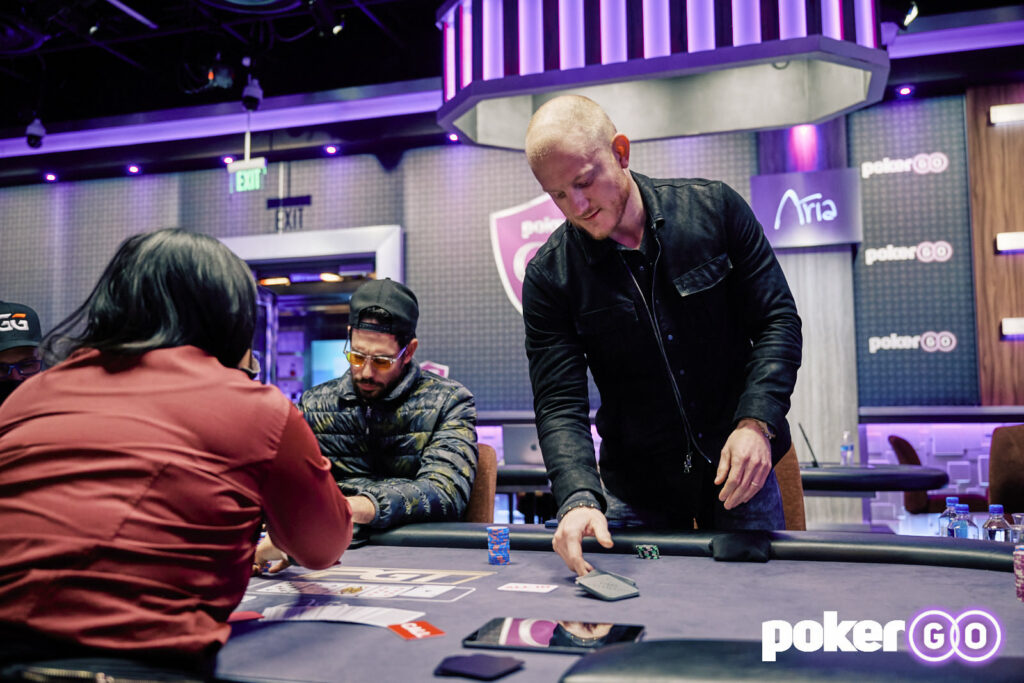 Daniel Negreanu opened to button to 60,000, and action folded to Jason Koon in the big blind, and he moved all-in for 335,000. Negreanu used a time extension and called.

, and Negreanu rivered a pair of aces to eliminate Koon in sixth place and burst the Event #8 Money Bubble. 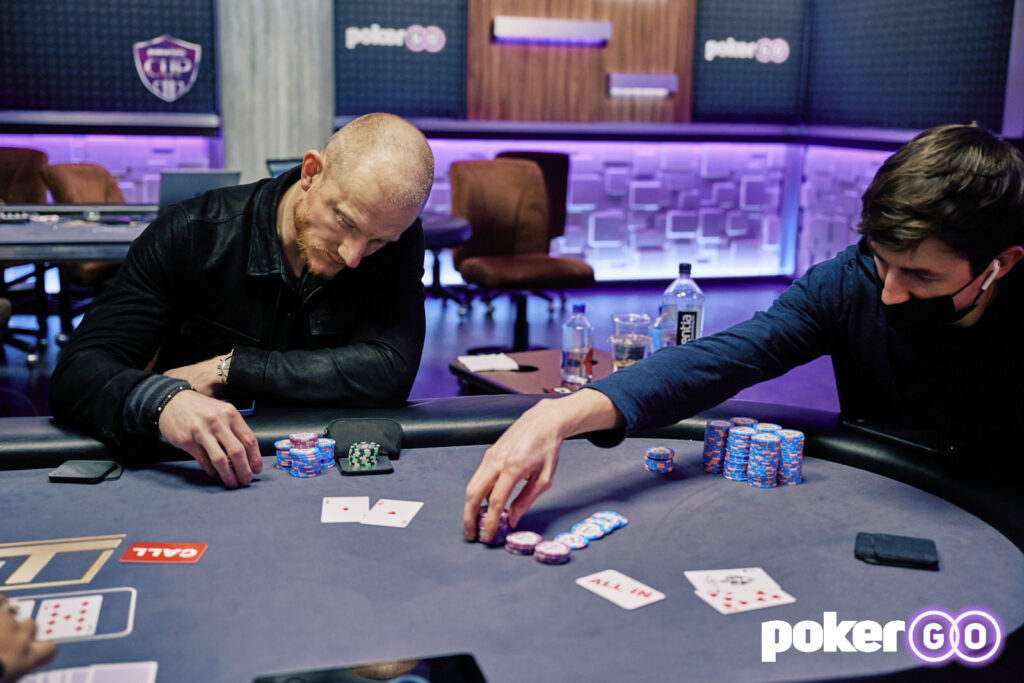 Jason Koon opened to 75,000 from under the gun, and Brock Wilson used a time extension next to act and moved all-in for 575,000. Action folded back to Koon, and he called.

, and Wilson doubled through Koon. 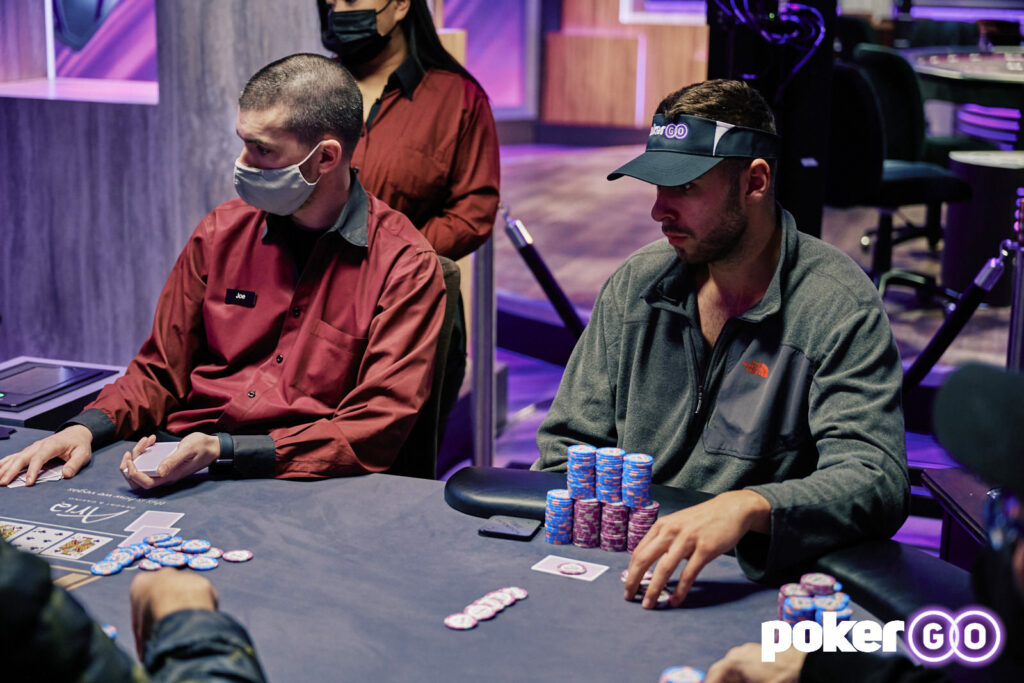 Sean Perry opened to 60,000 from under the gun, and Daniel Negreanu called in the cutoff. 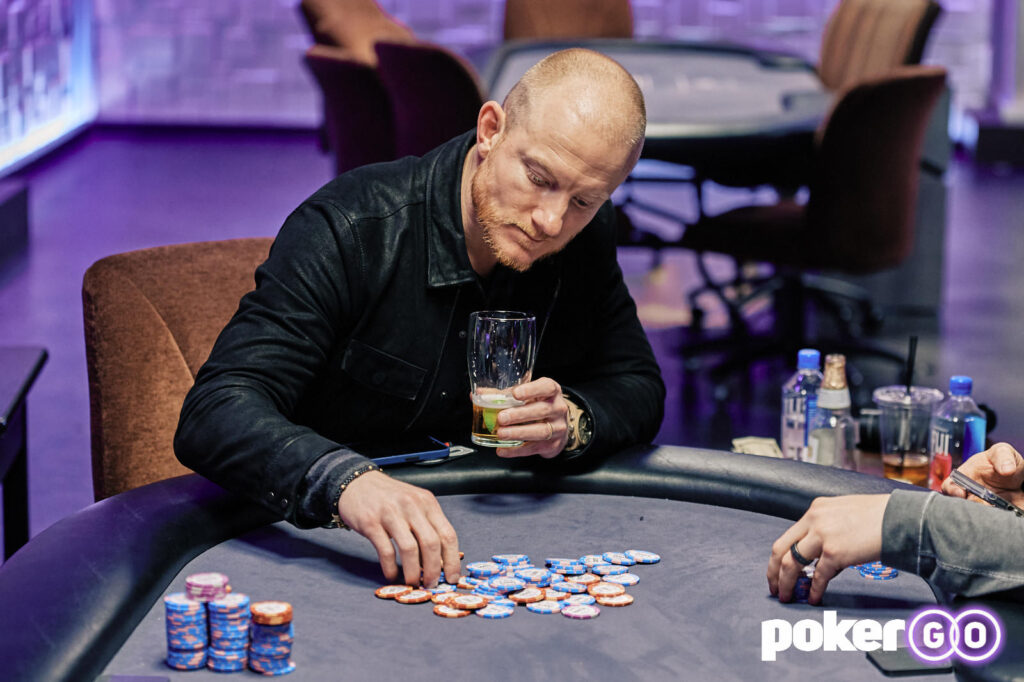 Action folded to Jason Koon in the small blind, and he limped. Brock Wilson was in the big blind and moved all-in for 305,000 effective. Koon snap-called.

, and Koon’s aces held to double. 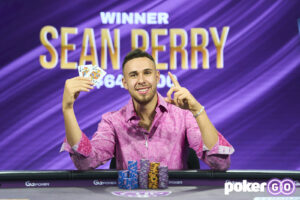 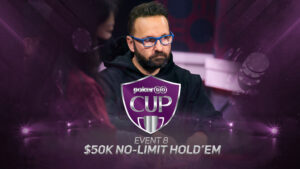 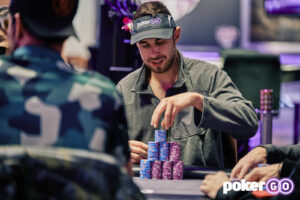 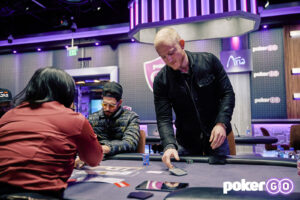 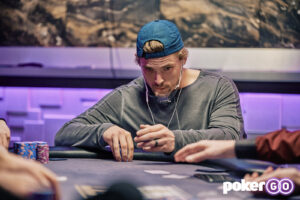 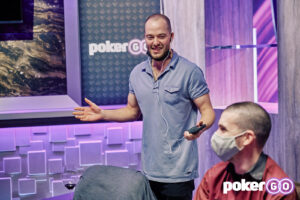 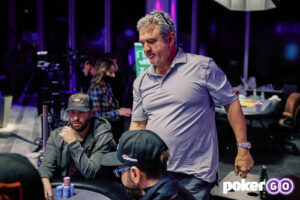 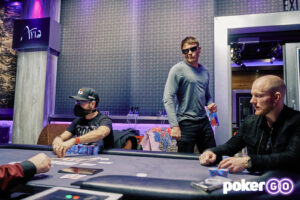 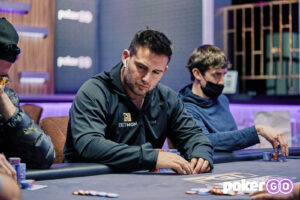 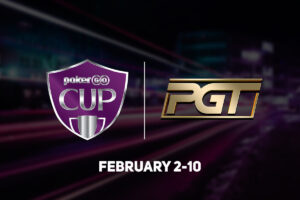