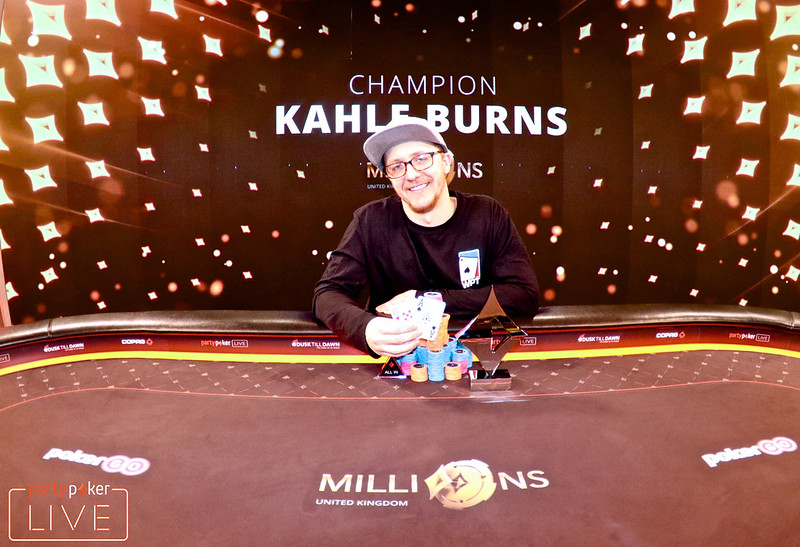 Kahle Burns has emerged victorious in the $25,500 Super High Roller, taking the title and $350,000 top prize after a day with more twists and turns than the Monaco Grand Prix.  His final opponent, Igor Kurganov, at one time held a chip lead that seemed unassailable, but Burns was never a short stack and once heads up, won a crucial double that set him on the track to victory.

A total of 37 entries generated a total prize pool of $897,250, paid to the top five finishers.  Day 1 brought 10 survivors forward to face a few last-minute registrants (5th place finisher Steve O’Dwyer among them) and the field expanded to three tables briefly as several late-stage bustees fired their last allowed bullets.

Several well-stacked Day 1 survivors fell foul of fortune early on, including Kristen Bicknell, Alex Foxen, and Mikita Badziakouski.  Start-of-day chip leader (by quite some way) Luke Reeves dwindled in chips and rallied repeatedly, maintaining a position near the top of the counts for most of the day.  When the final table of nine formed after the elimination of Adrian Mateos, Burns had already surpassed him, however, and Kurganov was about to.

Kurganov’s first boost in chips came at the expense of Preben Stokkan (pocket kings vs. pocket jacks), and he won a huge pot from O’Dwyer early on the final table that set him up for a period of what can only be described as steamrolling.  The final table lost Rainer Kempe, Yair “The Wolf” Bitoun, Leon Tsoukernik (with a painful cracking of kings), then tightened up for a level on the bubble.  The final unpaid spot went to Reeves, in a dramatic blind-on-blind confrontation with Kurganov, who’d raised from the small blind with queens and found the erstwhile chip leader moving all in for ten times the amount with fours (no help from the deck).

O’Dwyer busted shortly after the bubble burst, adding $75,000 to his already vast live tournament  winnings, but falling short of taking back to back MILLIONS Super High Roller titles.  There followed a pressure-filled period for short stacks Stokkan and Ben Heath, the former eventually falling in 4th ($100,000) and the latter soon thereafter in 3rd ($150,000).  “One bullet Ben,” as the commentators described him, had manoeuvred without much help from the deck throughout the streamed final; when Kurganov eliminated him he held a near 3:1 chip lead over Burns.

Heads up was played swiftly, with little need for the timebank cards.  Small pots went back and forth until a crucial hand saw Burns flop a queen-high heart flush when Kurganov held the ace of hearts, eventually spiking a river pair and paying off a full double through (that river saw the only double timebank card use of the final table, by Burns, before moving in).

Kurganov fought back.  Both players began to chat more than they had been previously, having a beer and making up a special “mandatory check” option that they both agreed to.  At this exact point, however, the final hand played out, an all-in preflop confrontation between Kurganov with pocket fours and Burns with ace-ten.

The board brought a broadway straight for Burns, handing him the title and $350,000, while Kurganov took second place and $222,250.

Both players now have the option of heading straight back into the breach for the $10,300 Main Event, which began alongside the conclusion of this event.  Day 1b begins tomorrow at noon local time, with live reporting starting alongside it.