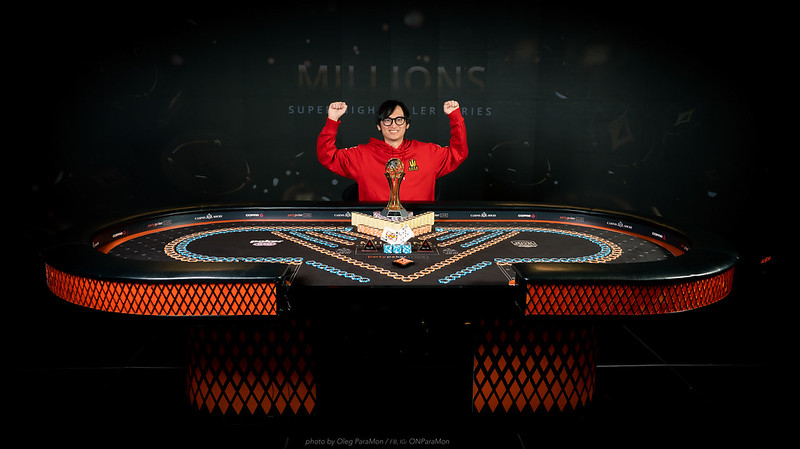 The trophy and and $800,000 first prize in Event #5: $50,000 Short Deck went to Wai Kin Yong today, after a heads up battle that truly deserves the name against the player many consider the GOAT, Phil Ivey.  Making his first final table at the partypoker LIVE MILLIONS Super High Roller Series Sochi, Yong may have been an unknown quantity to some watching the live stream, but has proven his chops (to the tune of over $10 million in winnings) at the highest buy-in levels worldwide.  He was the very last player to register in Event #5, and when the dust settled, he was also the last player standing from a field of 50.

Returning today were eight in-the-money players, still short-handed on two tables.  With the elimination of Paul Phua (who narrowly missed out on his third final table here in Sochi), the consolidated final began with a double through for Yong through chip leader Mikhail Rudoy.

Early action was driven by Cary Katz and Sam Greenwood, both experienced super high rollers with over $20 million in winnings apiece and fresh from sharing a final table in yesterday’s Event #4.  The latter, however, started Ivey’s ascent to the chip lead, exerting the pressure of his big stack by moving in preflop with king-jack offsuit but finding Ivey willing to risk his middle-of-the-pack stack in its entirety with ace-jack.  Though Greenwood flopped the nut straight, running tens filled Ivey’s boat in a dramatic double.  This was not, however, to be the most eye-catching hand the two of them were to play on the final.

Seth Davies, who had seen few playable hands at this crucial stage of the tournament, lost his one all-in confrontation to Rudoy, jamming king-ten suited vs. Rudoy’s limp-calling ace-jack suited and receiving no help from the deck.  Davies, a prior $250,000 Super High Roller Bowl finalist, picked up $125,000 for 7th place, and the “official” final table of six continued.  Ivey had taken the lead, with Rudoy now a close second in chips when a huge flip (jacks vs. ace-king, all in preflop) propelled the sole Russian finalist to the exit in 6th ($150,000).

Aaron Van Blarcum followed Davies to the rail, having provided Yong with his second double through (calling most of his stack with pocket tens on the button when Yong moved in preflop with queen-jack suited and failing to hold).  Left with dust thereafter, Van Blarcum’s incredible fourth final table appearance this week came to an end with a $200,000 payday, a trophy still proving elusive.

Cary Katz has spent almost as much time on live streamed final tables in Sochi since Saturday as Van Blarcum and today added $250,000 to his winnings with his 4th place finish, having manoeuvred a short stack around the bust-outs of his fellow Americans.

Ivey was now to finish what he started vs. Greenwood.  Having flat called preflop with two red aces and seen check from button Greenwood (holding king-eight of clubs), Ivey went on to flop a set, turn quads, and find the river bringing in Greenwood’s flush (in this variant, a hand that beats a full house).  The river saw two big stacks fly in, and only one come out: that of Ivey who suddenly found himself heads up with more than a 2:1 chip lead.

There followed a lengthy, quick-fire, small-ball period where Yong fought back against Ivey, nearly bringing the stacks to parity, before losing a big pot to send Ivey into end-game relentless mode.  Such was the pressure of the blinds, however, that one all-in pot flipped the chip lead, and minutes later Yong had clinched victory.  Ivey showed a return to tournament form at the top level after something of a hiatus, winning $525,000, while Yong took the trophy and $800,000.

Live reporting continues from Event #6: $100,000 No Limit Hold’em, the first six-figure buy-in event of the series here.  Its final table will be streamed on PokerGO from 7am EDT/2pm local time tomorrow, with live blogging continuing concurrently.

After the most dramatic final table seen so far at the partypoker LIVE MILLIONS Super High Roller Series Sochi, Wai Kin Yong has emerged victorious, seeing off Phil Ivey heads up to claim the trophy and $800,000 first prize.  Battling coolly through six of the toughest opponents that could be found, Yong entered what turned out to be an attritional heads up battle with a big chip deficit, but with blinds pressure rising, a crucial late-stage double through set him up for eventual victory.

A prize pool of $2,500,000 was split amongst the eight players (from 50 total entries) who returned for Day 2; a recap of today’s incredible action will follow.

Phil Ivey was in the lead throughout the longest heads up match seen in a Short Deck event this week in Sochi, until suddenly he wasn’t.  With the antes looming large, that recent double for Wai Kin Yong reversed their stacks, and it took one promising flop to end the tournament.

Yong made up the 300,000 button ante holding the powerful

.  Yong, with second pair and the straight draw, set Ivey to the test for the rest of his chips; Ivey, with top two, called.  The turn brought instant gratification for Yong, making his straight with the

“You enjoying this?” a grinning Ivey asked Yong.

“Pretty much,” was the honest answer.

on the river sealed the deal, handing Yong the trophy while Ivey, hard battle though he may have fought, took the runner up spot and $525,000.

Reversal of Fortune in One Pot: Yong Doubles to Chip Lead

first to act, and moved his whole 4,800,000 into the middle.  Unluckily for him, Phil Ivey had an easy decision with

, however, and with neither of the two aces appearing to save him, Ivey doubled his opponent into the chip lead for the first time heads up.

Wai Kin Yong failed to pick up any big hands recently, and with Ivey’s foot on the accelerator, had dropped to 2,600,000 when he received a much needed double through.  Ivey set his short-stacked opponent in with

, was swiftly called by Yong with

and was drawing dead by the turn on a

board.  Yong is proving hard to finish off.

After many small pots, one big moment of drama:  Button Phil Ivey bet all three streets with

), ending up with a potential tournament-deciding shove.  He hit bottom pair on the

while Yong hit top.  Yong continued to seem dislodgable on the

.  Yong checked a final time and Ivey moved all in, finally dislodging him after all.

What the deck is not delivering in terms of big preflop hand match ups (with one exception: both players receiving pocket jacks, getting it in, and promptly taking it back out again), Phil Ivey and Wai Kin Yong are making up for in speed of play.  Not a whiff of a timebank card (and rarely one of a preflop raise) and hands don’t make it past the flop, usually with a limp-call to start.

One exception: Ivey called with

.  He proceeded to check-snap-fold the

Ivey Pulls Back Some Chips

A rare preflop call of a raise just now, as Wai Kin Yong called in the cutoff with