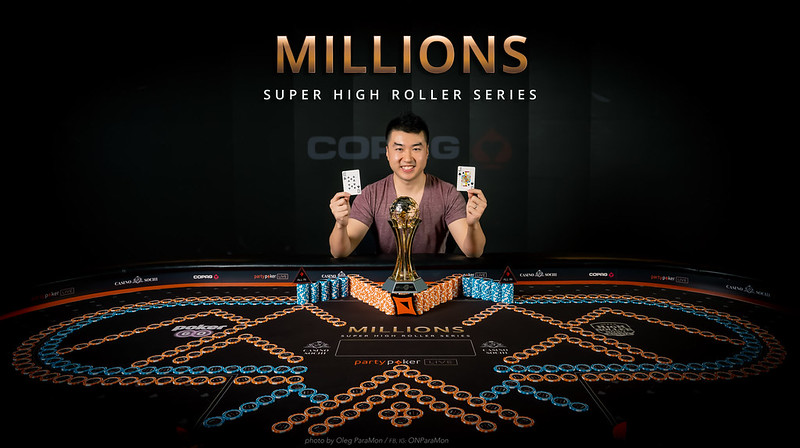 Jiang Xia He has won Event #1: $25,000 Short Deck, the first of the partypoker LIVE MILLIONS Super High Roller Series held at Casino Sochi this week, for $378,000, after seeing off a total field of 42 – his final four opponents within minutes of each other.  His fortunes wavered early on at the six-handed final table, but after a crucial double through against start-of-day chip leader Wai Leong Chan, He finished off the rest of his opposition in true steamroller style in less than half an hour.

Read through all of the Live Reporting coverage from this event right here and check out the full final table stream on PokerGO here.

The two shortest stacks coming into the final, belonging to WSOP Main Event champion John Cynn and Cary Katz, did not stay that way for long, both players doubling up within a level to even up the lower half of the counts.  The latter’s tortured fold of rivered trip jacks to a bluff from Aaron Van Blarcum (which made the highlights reel on the livesteam) sent him back into the danger zone, but he was to rally and outlast one of the more dangerous of danger spots on the final: Stephen Chidwick.

Chidwick, 6th on the overall all-time money list, who has already racked up four high-roller final table appearances in January alone (worth over $600,000), raced Van Blarcum’s ace-king with pocket queens (unsuccessfully), this major clash the only one the British pro was to be involved in.  He was eliminated in 6th place, winning $63,000.  Van Blarcum’s newly-acquired stack took a hit soon afterwards, as he gave He the double through that was to start the eventual winner’s ascent to the top.  This began to plump He’s stack, but it was a huge pot vs. Wai Leong Chan that started the wrecking ball rolling.  Chan limped with ace-king offsuit, then found He putting on maximum pressure with king-jack offsuit – the chip leader’s 5 million all-in preflop vs. second-in-chips Chan’s 4 million.  A rivered full house for He (after his opponent hit broadway on the turn) sent Chan suddenly to the rail (5th for $84,000) and changed the dynamic of the final table unalterably.

With such a huge chip advantage, He spent most of the level moving in on his opponents.  When they found hands – as Katz did with pocket jacks and eight big blinds left – he held or hit, as necessary.  Against Katz, He’s king-queen found another full house to send the PokerGo-emblazoned player (no slouch at high roller events himself, with over $27 million in live earnings) to the rail in 4th place ($105,000).

He’s final two opponents, Van Blarcum and Cynn, were both playing around half a million in chips; he continued simply getting it in preflop and letting his huge chip advantage do the work – with a little help from the deck.  He busted Van Blarcum in 3rd ($168,000) with king-ten of spades vs. jack-ten offsuit, flopping a flush to remove all hope for his hard-battling opponent.  One hand later, heads up play was over before it had really begun, Cynn making his final stand with king-nine of spades.  He’s final hand started off as jack-ten offsuit (with the jack of clubs), and ended up as no less than a Royal Flush, ending the tournament with the unbeatable nuts.

High rollers are not known for their need for rest from action: Chidwick has already been spotted in Event #2 $25,000 No Limit Hold’em and live coverage continues here throughout Day 1, with the final table streamed live on PokerGO from 8am EDT tomorrow. 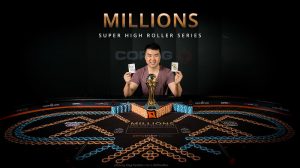