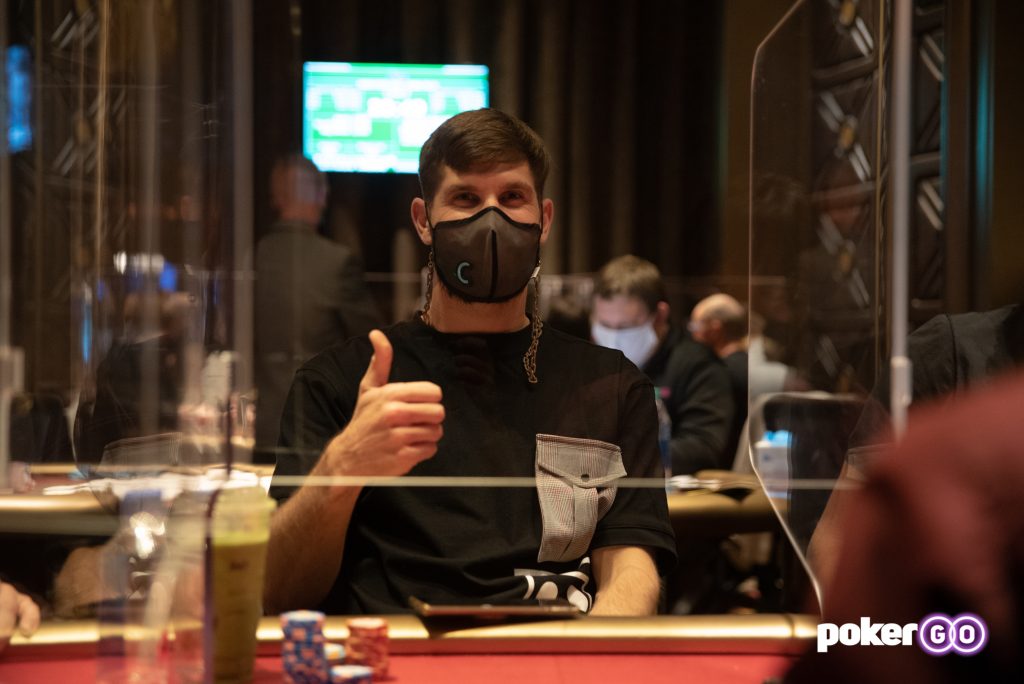 Heading into heads-up play Matas Cimbolas held a 3.5 to 1 chip lead over Johan Guilbert and he parlayed that advantage into the $163,200 first-place prize.

Event #15 saw a field of 51 entrants for a total prize pool of $510,000 to kick off the 4 days of high-stakes tournament action. High roller regulars Sean Winter, Seth Davies, Stephen Chidwick, and Chris Brewer hit the rail before reaching the money.

Heading into the final table all the momentum belonged to Ali Imsirovic after eliminating Sean Perry on the money bubble when his pocket deuces got all-in for just under one million in chips facing Perry’s pocket jacks. A deuce on the flop sealed Perry’s fate giving Imsirovic 1.85 million in chips heading to the final 8 players.

Jack Hardcastle eliminated the first two players of the final table when his pocket queens sent Jake Schindler to the rail in eighth and his pocket jacks sent Kristina Holst to the rail in seventh when her pocket threes could not improve.

Imsirovic kept the elimination train moving as his Ace-Jack had Sam Soverel’s Ace-four dominated. A jack on the flop sealed Soverel’s fate.

Andy Park came to the final table as the short stack but found two doubles early to keep his tournament dreams alive. However, there would be no Cinderella story today as he ran his last 85,000 chips into the turned flush of Hardcastle.

After send three of the first four players to the rail it was Hardcastle’s turn to go as his Queen-Jack was run down by the jack-eight of Cimbolas thanks to an eight on the flop.

Following a lengthy three-handed stalemate Imsirovic was the next to go after getting his pocket queens cracked by the jack-eight of Cimbolas.

The PokerGO Live Reporting team will be back on the floor of ARIA Hotel & Casino to provide live updates of Event #16 $10,000 No-Limit Hold’em starting Thursday, May 6, at 5 p.m. ET.

On the first hand following the break Johan Guilbert open shoved his last 1,000,000 in chips from the button.

Matas Cimbolas made the call from the big blind.

keeping Cimbolas’s Jacks in the lead.

gave Guilbert a pair but when the

Matas Cimbolas opened to 95,000 on the button and Johan Guilbert made the call.

saw Guilbert check to Cimbolas who continued for 75,000 and that got the job done as Guilbert’s cards hit the muck.

Cimbolas got a walk in the big blind on the next shuffle.

For the third hand of the orbit Cimbolas opened to 95,000 and Guilbert called from the big blind.

Cimbolas continued for 95,000 and Guilbert folded.

At the conclusion of the hand the players choose to take a 10 minute break.

Action folded to Matas Cimbolas in the small blind and he opened to 120,000.

Imsirovic continued for 145,000 and sent Cimbolas into the tank.

After using a time extension Cimbolas announced a raise to 320,000.

Imsirovic used most of the 30-second shot clock before announcing all-in for 685,000 and Cimbolas quickly made the call.

added a flush draw to go along with Cimbolas top pair but it was still behind the Queens of Imsirovic.

Johan Guilbert opened to 115,000 on the button and found a caller in Ali Imsirovic from the big blind.

was checked through, as was the

hit the river Imsirovic check to Guilbert who announced a bet of 200,000.

Before the chips even made it to the middle Imsirovic folded and Guilbert dragged in the pot. 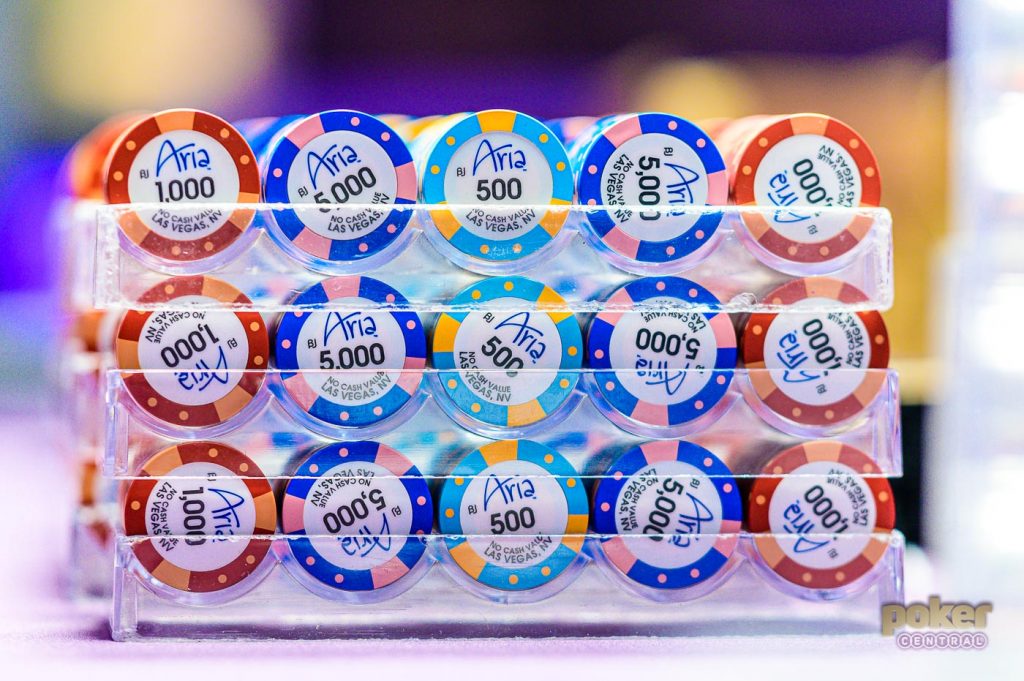 Action folded to Matas Cimbolas in the small blind and he opened to 500,000 which was enough to cover Jack Hardcastle in the big blind.

Hardcastle used a time extension to check Johan Guilbert’s chip stack and discovered they were about even before making the call for his last 400,000 in chips.

did not improve Hardcastle and he was eliminated in 4th place. 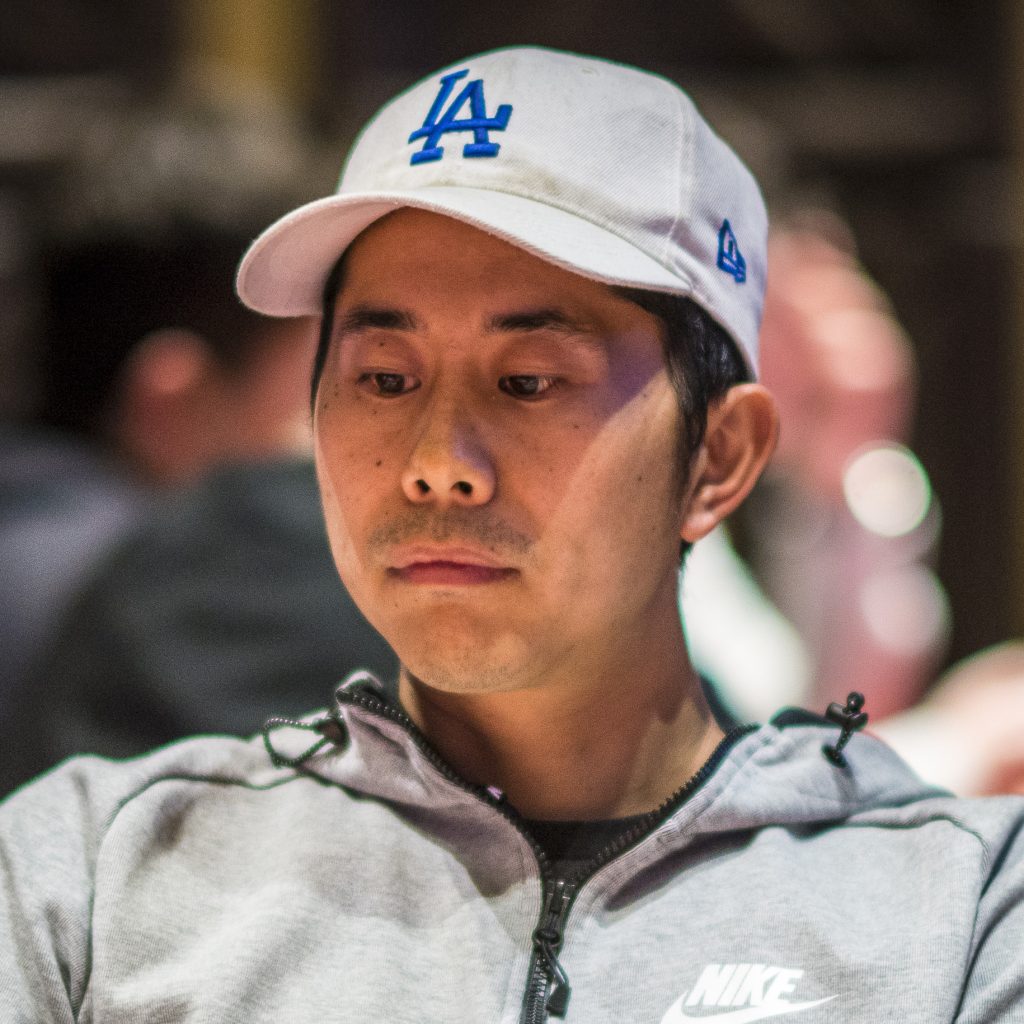 Action folded to Jack Hardcastle in the big blind who moved all-in over the top for 475,000 total.

Imsirovic folded and Park was at risk for his tournament life.

gave Hardcastle the nut flush draw along with his Ace-high.

Matas Cimbolas check-raised to 150,000 and Hardcastle made the call.

Hardcastle used all of his 30 second time bank before making the call.

completed the board and Cimbolas used a time extension before announcing all-in.

Hardcastle used his time bank and said “I can only beat

before making the fold. 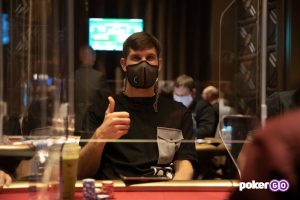 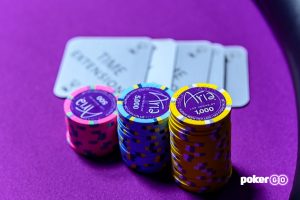