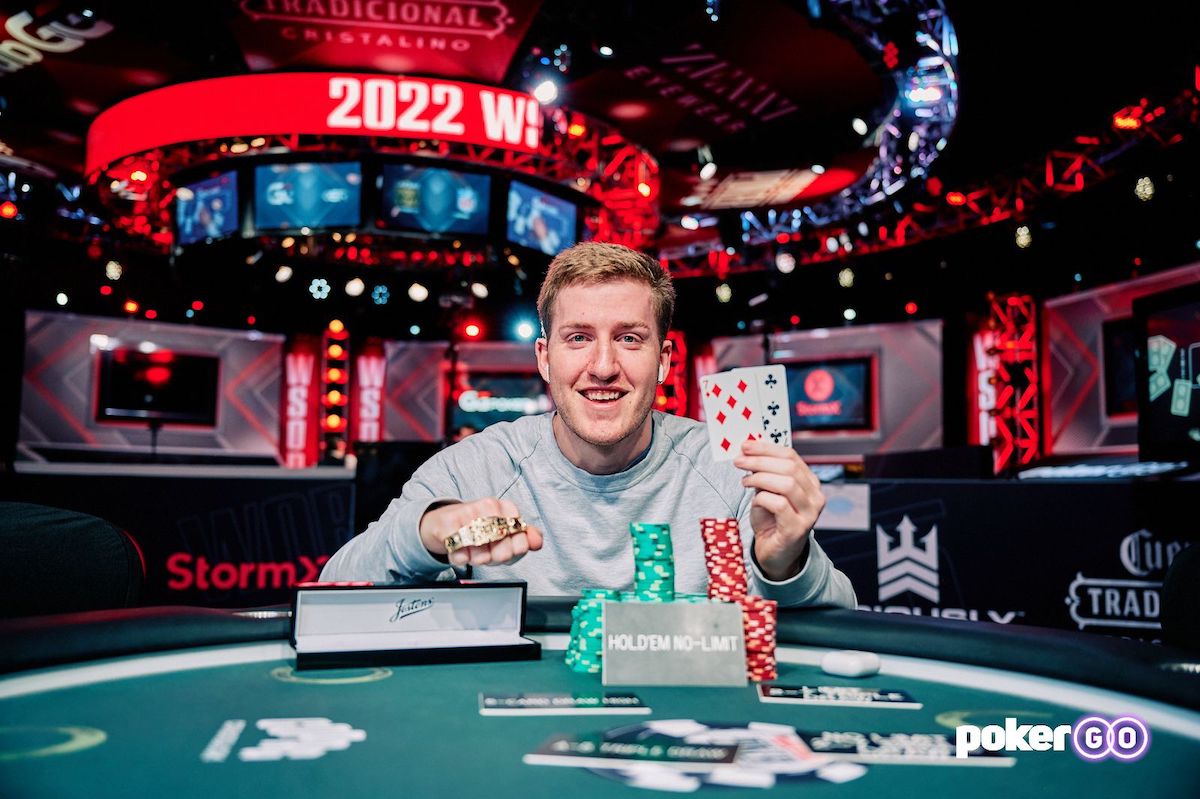 Ben Diebold wa one of three first-time WSOP bracelet winners on Day 9 of the 2022 World Series of Poker.

A huge day of action took place in the World Series of Poker in Las Vegas as a packed Paris and a bulging Bally’s welcomed players from around the world. With three bracelets won on the day, there was debut gold for both Jake Schindler and Ben Diebold.

Six players returned to action in the $50,000-entry High Roller tournament, which was won by Jake Schindler after he beat the overnight chip leader Brek Schutten to the title heads-up. With players such as 2019 WSOP Main Event runner-up Dario Sammartino (8th for $151,942) and David Peters (5th for $326,464) both taking part, the final table was a thrilling one to watch, with viewers treated to the whole show on the PokerGO live stream.

You can watch the event play down to a winner in stunning fashion right here, with commentary from Jeff Platt and Jamie Kerstetter throughout.

After coming back to finish off Event #10, the $10,000-entry Dealer’s Choice Championship,

Ben Diebold used the 5.7 million chips that he returned with to defeat Mike Gorodinsky and deny him a third bracelet. Keeping Gorodinsky at arm’s length throughout the short battle, Diebold eventually closed it out in No Limit Hold’em, with his pocket sevens holding against his opponent’s queen-jack to seal a memorable win and the top prize of $299,488.

In the $1,500-entry Limit Hold’em event, otherwise known as Event #13, proved lucky for Michael Moncek as he captured the title and $145,86 top prize. Outlasting a stellar final table, Moncek overcame Ben Ross heads-up for the title after Yueqi Zhu busted in third place.

The day began with just 16 players left from the 522 total entries. With three bust-outs in the opening level, former WSOP Main Event Joe McKeehen was out of the reckoning in fifth after losing two pots to the eventual winner along the way.

Cada and Tsang Battling for More Gold in Six-Max

On a busy day, players such as Jeremy Ausmus, Taylor Paur and Shankar Pillai all cashed along the way, with the top prize of $456,889 now being chased by 14 players without a WSOP bracelet and just two with. Cada is joined in that respect by the short-stacked Anson Tsang, who has just 520,000 chips.

There is a stacked field remaining in the 15th event of the WSOP, with Johannes Becker leading the 24 players who survived from 110 on Day 2 of the Omaha Hi-Lo 8 or Better Championship. Becker ended the day on 895,000 chips, marginally more than Freddy Deeb with 840,000.

Daniel Zack (610,000), Bryce Yockey (605,000) and Yuval Bronshtein (595,000) are all in the top 10 chipcounts, but players such as Phil Ivey, Brian Rast and WSOP Main Event reigning world champion Koray Aldemir all attempted late registration at the start of the day but busted.

Among those who didn’t make the cut and bag up chips at the close of Day 1 were WSOP Main Event winner Joe McKeehen, David Pham, Andrew Lichtenberger, David Williams, Bertrand Grospellier, Eddy Sabat and Chris Brewer.

Others fell by the wayside, with Jaswinder Lally, Adam Friedman, Robert Campbell and Barry Greenstein all failing to make the Day 2 cut.