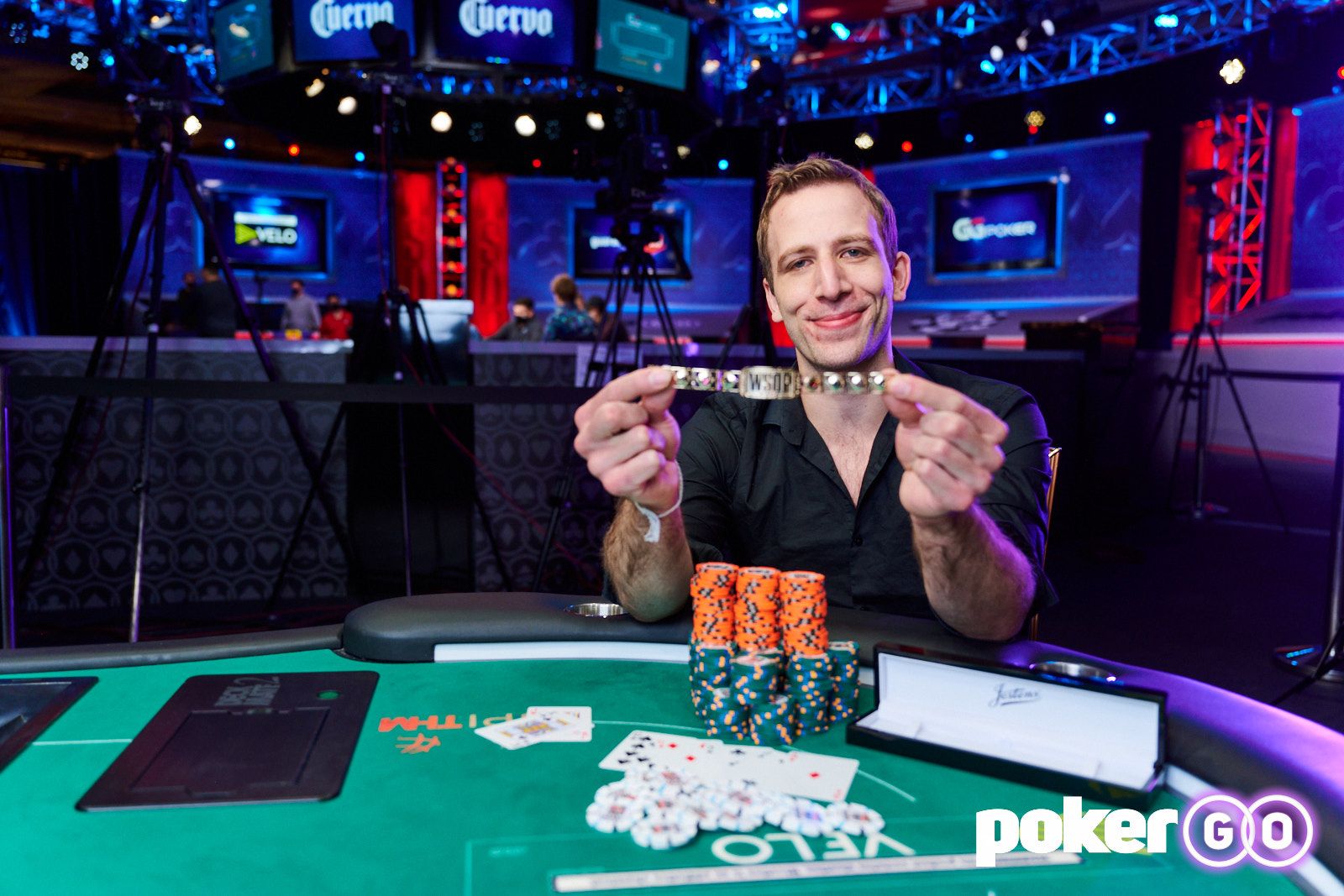 A day of drama at the felt saw seven WSOP tournaments in play as Benny Glaser beat Everett Carlton to the delayed $10,000 Razz Championship bracelet, Ole Schemion won the first WSOP bracelet of his stellar career and Jason Wheeler grabbed gold for the first time in his career at the Rio in Las Vegas.

Winning big has never been German crusher Ole Schemion’s problem. The tournament titan has won over $16m in his career at the live felt alone, but until today had never won a WSOP bracelet. That monkey has left his back after one of the most dominant victories of the 2021 World Series of Poker saw him win the $1,979-entry Poker Hall of Fame Bounty event.

Coming into the final table, Schemion was in incredible shape with a massive chip lead meaning that he had 6.9 million chips and his five opponents totalled 7.4 million between them. That disparity gave the German all the control at a final table he ran over as he bludgeoned his way to the gold in spectacular fashion.

Player after player fell as Schemion used his stack to devastating effect, winning in some improbable positions due to the daring and domination of his play. With all the chips from so far out, the German could afford to take risk as he hunted eliminations that made his task simpler, and he did so with ruthless efficiency. Heads-up, he took no time at all to finish the job and beat Canadian player Benjamin Underwood to the title and $172,499 top prize.

Watch how it played out right here:

Glaser Grabs Gold for Fourth Time at the Rio

With the delay overnight meaning the bracelet could not be won on the schedule final day of Thursday, Glaser instead made Friday night his night. Going into the heads-up battle with a substantial lead, Glaser lost it, but somehow clawed his way back from a big deficit to grind his opponent down and take the title.

Winning his fourth career WSOP bracelet, the multi-talented Glaser has really carved out a niche for himself in winning mixed game bracelets on a regular basis and will be one to watch over the coming years as his success at the Rio over the last decade transfers to Bally’s and Paris in 2022.

In Event #80, a fast-paced final saw two British players battle it out heads-up for the gold. After Mike Matusow bubbled the official six-handed final table in the $3,000-entry PLO event, Robert Cowan went wire-to-wire to claim victory over his fellow Brit after a dramatic playout in the final stages of the tournament.

Karel Mokry from the Czech Republic slid from fourth in chips when the final began to out the door in sixth for $39,688, before William Benson and Dylan Weisman’s departures meant there would be no American winner. Uri Reichenstein, who has had a consistent 2021 WSOP without grabbing gold, crashed out in third for $116,106, before an all-British heads-up saw Cowan lose a commanding lead before getting it all back again and sealing the deal.

In the $800 Deepstack event, Jason Wheeler won his first-ever career WSOP bracelet as he took the title away from an unfortunate Julian Velasquez in an exciting final. With Garry Gates crashing out in fourth place just as he did in the 2019 WSOP Main Event, Diogo Veiga’s departure in third place saw Velasquez go into heads-up with a lead.

Wheeler, however, came roaring back after a miraculous river gave him a wheel draw when his ace-high shove got there against pocket sixes, and a short time later, his pocket aces held against his opponent’s own ace-high to end the event. With 121 players having taken their seats at the start of the second and final day, there were cashes for players such as overnight chip leader Will Givens (39th for $4,605) Justin Lapka (47th for $3,920) and Melanie Weisner (66th for $2,933).

The penultimate day of the $250,000 Super High Roller saw huge drama as some of the best poker players in the world met at the felt with just a handful of days of this 2021 World Series to go.

Michael Addamo and Ali Imsirovic led the way going into the action, but neither made the latter stages, as Spanish player Adrian Mateos steamrollered his way through some of the best in the game.

With German crusher Christoph Vogelsang bubbling the money by busting in sixth place, the final five was set for the live streamed final tomorrow on PokerGO, with Mateos in complete control. Holding 25.5 million chips, Mateos has more chips than his remaining four opponents combined, meaning a day of drama is on the cards as one overwhelming favorite in under all the pressure in the poker world under the lights in the Thunderdome.

What’s going to happen? The only way to know is to tune in and watch the show.

In Event #83, the $1,500-entry Closer event saw 802 players take to the felt with just 121 making the money and 25 surviving a thrilling Day 1a. Turkish player Osman Ihlamur bagged up the biggest stack with over 1.7 million chips, but with Chris Moorman (1.25m) and Kenny Hallaert (1.25m) both hovering close by, it is going to be exciting Day 2 of the event to ‘close out’ victory, with Day 1b taking place before that tomorrow.

An exciting first day of action in the $50,000 Pot Limit Omaha Event #84 saw Hungarian player Laszlo Bujtas (1.9m) bag up the chip lead as Josh Arieh (1.35m) continued his heater in pursuit of the WSOP Player of the Year title.

With 85 players taking to the felt, only 33 survived as players such as Daniel Negreanu (1.12m) and Dan Cates (1.045m) both made the top 10 as they attempt to win what will be a prestigious bracelet to claim late in the 2021 World Series of Poker.