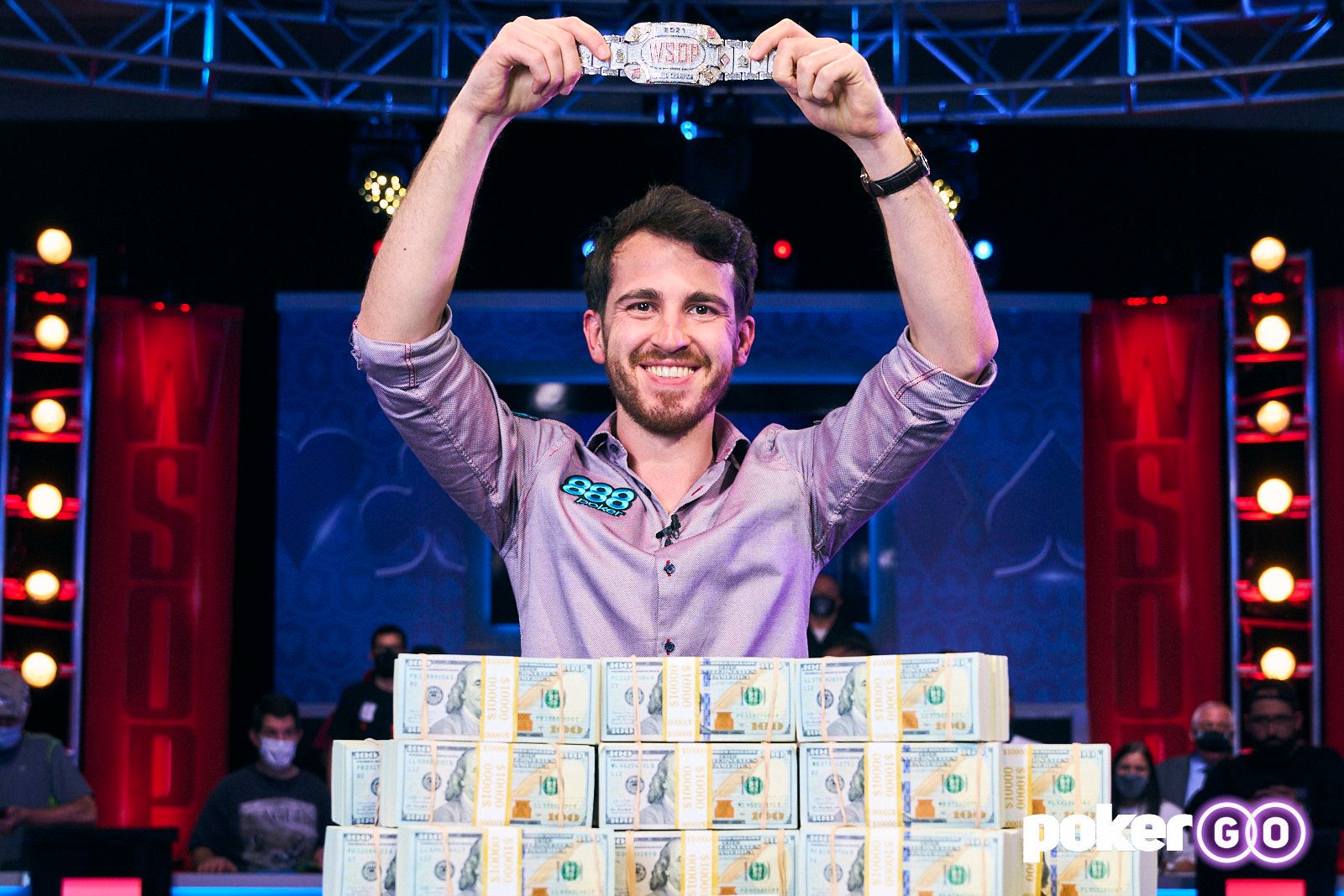 Koray Aldemir was the latest winner of the WSOP Main Event, taking the $8 million top prize

A huge day of action in the Thunderdome at the Rio in Las Vegas, Nevada, saw German player Koray Aldemir crowned world champion as he won the WSOP Main Event in style, toppling George Holmes heads-up to win the $8 million top prize.

With British player Jack Oliver finishing third for $3 million and Holmes claiming $4.3 million for his runner-up result, the champion revealed how surprised he was to win the poker tournament every player wants to win in the final WSOP at the Rio.

“I kind of had the idea of winning Player of the [Year] once because I’m just starting in mixed games and to have a Player of the Year banner… but I never expected to have a Main Event banner. It’s incredible.” He said.

The 31-year-old from Germany is the second German player from his home country to win the Main Event in three years after Hossein Ensan the most recent all-live WSOP Main Event in 2019. With the result pushing Aldemir past the $20 million mark in his live poker career, he credited his opponent when the final chips had made their way into his pile.

“He was really, really tough,” Aldemir said of his heads-up adversary George Holmes. “He played great. He put us in spots, not only against me but against the other players. He made good bluffs, made good folds. As you could tell, it was really tough. I had the chip lead to start with and he grinded me down. Then I had to fight really hard to beat him.”

Aldemir did indeed close it out in some style. You can watch exactly how the final few hands went down in dramatic fashion right here:

In Event #75, the $1,500-entry Freezeout event, Chad Himmelspach won his first-ever WSOP bracelet, taking care of the final hurdle as he overcame German player Stefan Reiser heads-up. With Himmelspach claiming the top prize of a massive $270,877, the overnight chip leader Renmei Liu failed to finish off a final table he started out dominating as he finished in third place for $121,580.

In what was a topsy-turvy heads-up battle, both Reiser and the eventual champion held the chip lead at various points but Himmelspach prevailed with pocket aces in a crucial pot where he doubled up and although fellow German Koray Aldemir got the job done in the Thunderdome, Reiser couldn’t follow suit. Himmelspach’s win in the event featuring 1,191 players and a total prize pool of over $1.5 million saw him win treble his entire lifetime winnings in ranking events in just one magical tournament victory.

The third and final bracelet winner of the day was Brazilian player Paulo Joanello, who at his first WSOP final table, took down the top prize of $321,917. In doing so, he sent his raucous rail into raptures as yet another Brazilian player won big in a year of achievement for the poker nation.

The final day began with a massive 114 players still in contention, but while stars of the felt such as Anthony Spinella, Ari Engel and last year’s WSOP Main Event winner Damian Salas all fell out of contention, Joanello did quite the opposite. Even at the final table, the experienced pros seemed to fall quickly as Scott Hall in 9th and Elio Fox in 7th were eliminated.

When Toby Price made heads-up the American was in the lead, but both players exchanged the lead on multiple occasions as a two-hour tussle for the bracelet took place. Eventually, Joanello held on the crucial hand as his overpair beat Price’s top pair on the flop and once turn and river fell, there was a Brazilian party confined to the single table that closed out Event #77 inside the Rio.

On the penultimate day of the $10,000-entry Razz Championship, players such as Phil Hellmuth (133,000) and Erik Seidel (227,000) survived to battle, but Yuri Dzivielevski totalled 1.1 million chips to lead the final 13 players.

With a total of 109 players taking part, the $10,000 Razz Championships have looked like they might well produce late drama, if only down to the sheer number of players looking to win the bracelet. If Hellmuth were to recover and win on the final day, he would scoop a record-extending bracelet #17. Were Seidel to top the lot, he’d bag number 10, a total only bettered by the Poker Brat.

With top-quality players such as John Monnette (861,000) and Benny Glaser (552,000) big threats, the final day will see a great fight for the glory and the $274,693 top prize, with Seidel and Hellmuth sharing the felt when play resumes.

In Event #79, players from the Poker Hall of Fame had bounties on their heads appropriate to the year they were inducted as legends such as Doyle Brunson took part in the battle to win the WSOP bracelet and $172,499 top prize. With 469 players, only 63 survived to Day 2, with the top 71 making money.

Among those with chips to take on Day 2 are some big names, with Maria Lampropulos (383,000), Ole Schemion (333,000), Dylan Wilkerson (240,000), and Joao Vieira (75,000) among them, while bounties that were claimed as each legend busted included Doyle Brunson, Daniel Negreanu, Barry Greenstein, Scotty Nguyen, Barbara Enright, Linda Johnson, Tom McEvoy, Jack McClelland, Phil Hellmuth and the 2021 inductee, Eli Elezra.

In an exciting addition, Hollywood legend Vince Vaughn – announced as Master of Ceremonies for 2022 when the World Series Moves to Bally’s and Paris – also took his seat with a special $10,000 bounty on his head, eventually claimed by Kunal Patni, who won with queen-jack against the Swingers, Wedding Crashers and Dodgeball star’s ace-jack and apologised as the queen-high board played out.

“No worries, good suck out!” quipped Vaughn as he left the table.