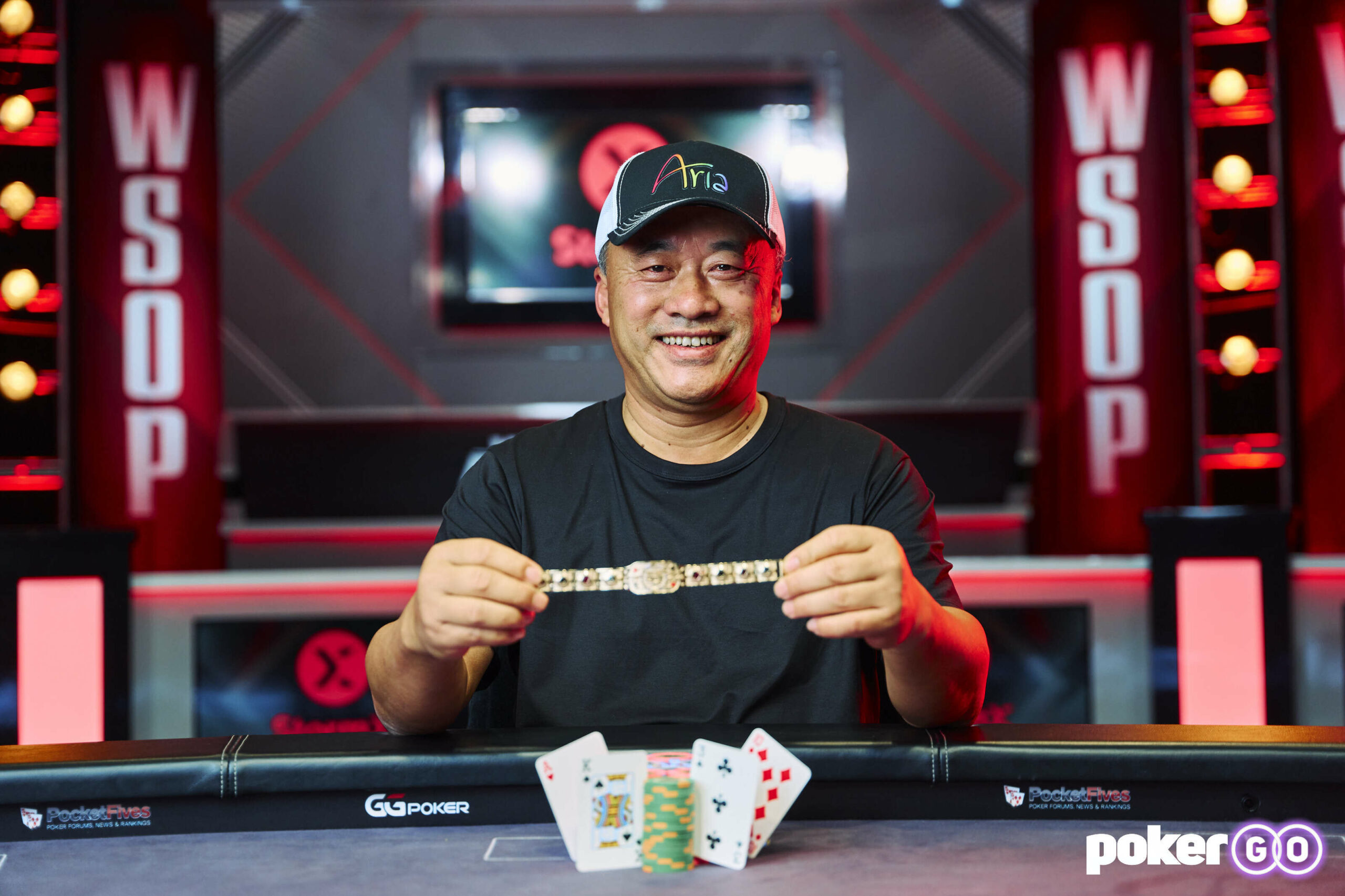 Shanghai’s Tong Li is the newest gold bracelet winner from the World Series of Poker. On Sunday, Li won Event #19: $25,000 Pot-Limit Omaha High Roller for his first gold bracelet and $1,467,739 in prize money.

At the final table, which was live-streamed on PokerGO, Li had to get through start-of-day chip leader Fabian Brandes, reigning WSOP Player of the Year Josh Arieh, PLO specialist Sam Stein, and two-time bracelet winner Scott Ball. Li did just that and he did it without feeling intimidated. Li said he wasn’t nervous from the start, despite the level of competition he faced in this high-roller field. He said he was very relaxed and had nothing to lose. The biggest thing that Li said he had to overcome was jet lag from the long flight from China.

Li said he enjoys the game of pot-Limit Omaha very much, and it’s his game of choice. Back home, Li plays a regular PLO game with his friends once a week. Next time he goes to play, he’ll have a bit more bragging rights in the form of a WSOP gold bracelet.

At Sunday’s final table, two-time WSOP gold bracelet winner Scott Ball busted in fifth place, going out to chip leader Fabian Brandes for a prize of $342,590. Following Ball out the door, Sam Stein, who is also a WSOP gold bracelet winner, hit the rail in fourth place for $465,717. Stein was eliminated by reigning WSOP Player of the Year Josh Arieh.

Tong Li began as the short stack during three-handed play, but he was able to find a double up against Arieh to leave the two virtually tied in chips. On a board of king-jack-eight-seven with two hearts, Li check-raised all in with ace-ace-ten-six and Arieh called with ten-eight-five-four. Arieh did have two hearts in his hand. The river was the ace of diamonds to give Li the double up.

Li would soon move his way into the chip lead. Then, he made quad threes to soar over the 20,000,000-chip mark. After putting a dent in Arieh’s stack with a flush versus Arieh’s set, Li then sent the 2021 WSOP Player of the Year to the rail in third place.

On a nine-four-four-ace-seven board, Li checked and snap-called Arieh’s all-in shove. Arieh had flopped a full house with jack-nine-nine-two, but Li turned a better full house with ace-ace-queen-five and Arieh was left with a $644,365 payday.

Heads-up play began with Li holding a 3-to-1 chip lead over Brandes. After exchanging a few small blows, the two got their money in on a ten-ten-seven flop with two hearts. Li had ace-king-ten-three with just the ace of hearts. Brandes had ace-queen-nine-eight with no hearts but he did have two clubs for a backdoor flush draw. The board ran out clean for Li and he was crowned the winner of 2022 WSOP Event #19: $25,000 Pot-Limit Omaha High Roller. Brandes picked up $907,132 in prize money.

In addition to the gold bracelet and $1,467,739 in prize money that Li bagged, he also picked up 700 points for the PokerGO Tour (PGT) leaderboard. You can see the updated top 10 of the PGT leaderboard below, which includes Phil Ivey sitting on 2,133 points in third place. Ivey added more points with a third-place finish in Event #22: $10,000 Seven-Card Stud Championship at the 2022 WSOP.

Note: PokerGO Tour leaderboard accurate at the date of this article.