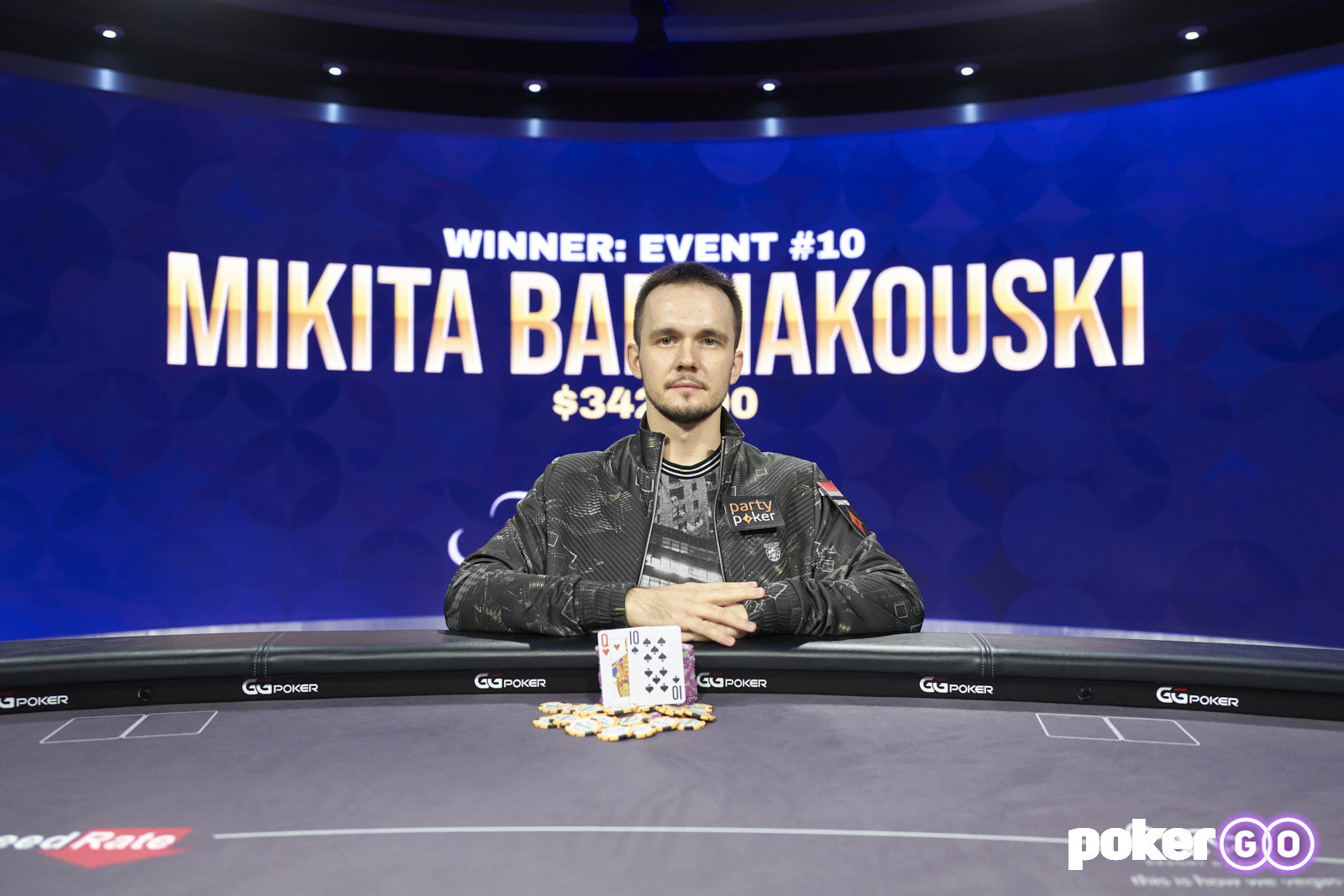 The 10th event of the 2021 Poker Masters has its winner. Topping the 38-entrant field was Mikita Badziakouski, defeating Seth Davies in heads-up play and winning $342,000.

“It feels good, but you know, it’s just about luck,” Badziakouski said. “We had 38 entries and I had my chances and that’s how it happened.”

Badziakouski was playing his first event of the 2021 Poker Masters, coming to Las Vegas for the tail end of this series and leading into the Super High Roller Bowl that is coming up September 27-29, 2021.

“I believe it’s not really influencing the situation, or at least it should not be,” Badziakouski said when asked about how this win may serve as some momentum heading into the Super High Roller Bowl. “As a professional, I just need to come and try to perform my best no matter the results from the previous events.”

Being a professional poker player, Badziakouski has undoubtedly been on both sides of variance. There are times when he’s lost due to variance or others when he has benefitted from it, such as a few key pots at this final table. Good or bad, variance has a way of playing with one’s emotions, but Badziakouski said it’s important to stay grounded.

Five players returned for Day 2, and it was Jason Koon busting first on the day. It was Koon’s second cash of the 2021 Poker Masters and his fifth-place finish was worth $76,000.

Next to go was PokerGO Tour presented by Guaranteed Rate leaderboard frontrunner Ali Imsirovic. Imsirovic was second in chips to Badziakouski with four players left and the two of them clashed in a big pot. Imsirovic picked up pocket kings on the button and raised to 75,000 with the linds at 15,000/25,000 with a 25,000 big blind ante. From the big blind, Badziakouski reraised to 275,000. Imsirovic then four-bet to 475,000. Badziakouski moved all in for Imsirovic called off his stack for 1.265 million. Imsirovic had the

and Imsirovic was eliminated in fourth place for $104,500.

Daniel Negreanu needed a second-place finish or better to move to the top of the 2021 Poker Masters leaderboard. He didn’t get it, though, as he was eliminated in third place for $152,000. On his final hand, Negreanu was all in with pocket sixes against the pocket aces for Badziakouski. Negreanu found no help and was eliminated.

To begin heads-up play, Davies had the chip lead by a little more than 1 million, with his 2.885 million in chips up against Badziakouski’s 1.865 million.

After working his way to more than 3 million in chips, Davies had Badziakouski all in and on the ropes with one card to come. The two got the money in preflop with Badziakouski holding the

. Davies faded the flop and turn, but a nine on the river gave Badziakouski a key double up and the chip lead.

The two later got all in again, this time with Badziakouski holding the

. The flop and turn was

before once again a nine hit the river ([9s) to win it for Badziakouski. This time, the win meant Badziakouski had won the tournament, with Davies finishing second for $228,000.

Thanks to his runner-up finish, Davies moved into eighth place with 1,323 points and knocked Clayton Maguire out of the top 10.