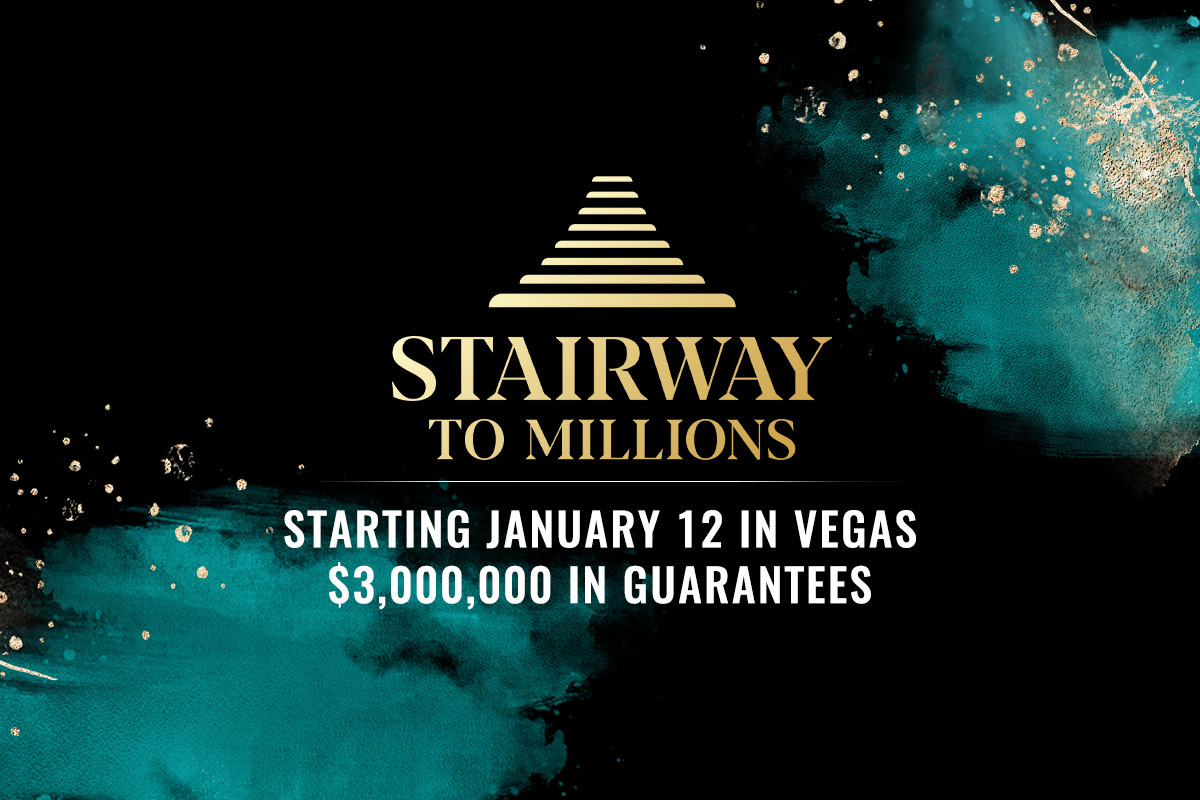 The brand new PokerGO Stairway To Millions is every poker player’s ticket to competing in a $100,000 buy-in event for millions of dollars in prize money. The unique format gives players the chance to buy in for $1,000 and run it up the highest of stakes and a chance to compete on the greatest stage in the game at the PokerGO Studio in Las Vegas. Here is everything you need to know about the Stairway To Millions tournament, including the schedule, how to play, and more.

When Is the Stairway To Millions?

The Stairway To Millions starts Wednesday, January 12, 2022. The entire series runs through Thursday, January 20. The series features eight separate tournaments, and each tournament is a two-day event. You can view the complete schedule of starting days below.

In order to qualify for any discounts, players must be in the tournament registration line by 12 p.m. PT. Late registrants and re-entries will be subject to the full tournament fee.

Where Is the Stairway To Millions?

What Is the Format?

The Stairway To Millions is a series of eight individual poker tournaments, but they’re all connected through a unique format. Players who reach the money for a certain level will automatically win entry into the next level, making it possible for a player to run $1,000 into over $1,000,000. For example, players who play the first level that has a $1,000 buy-in and cash will receive an automatic entry into the $2,000 level in addition to any prize money won at the $1,000 level. In order to continue to progress up the ladder of events, players just need to finish in the money of a certain level. The next level’s buy-in amount is automatically deducted from the amount a player cashes for.

What Is the Structure?

Registration: The registration period for each event is open through Level 6 at each level.

Re-entries: The first seven events allow for two re-entries, so each individual player can enter up to three times in each of the first seven levels as long as they do so before the registration period ends. Event #8, the $100,000 buy-in finale, is a freezeout (single entry).

Players Per Table: Tables will be eight-handed to start and transition to seven-handed play once registration closes.

Length of Play: On Day 1 of each tournament, the field will play down to the final six players remain or until midnight, whichever comes first. Day 2 for every event will begin at 12 p.m. PT.

Play Clock: A play clock will be in play from the beginning of each tournament, providing players 30 seconds for each action. Each player receives six 30-second time extensions. Any unused time extensions from Day 1 will transfer to Day 2, and the final six players will receive an additional six time extensions.

Does the Stairway To Millions Have Prize Pool Guarantees?

Does the Stairway To Millions Count for the PokerGO Tour?

Starting with Stairway To Millions 05, the $15,000 buy-in tournament with a $300,000 guarantee, the second half of the series’ events will be included in the PokerGO Tour presented by Guaranteed Rate. You can view the PokerGO Tour points system here.

Is the Stairway To Millions Live Streamed?

To kick off the series, popular poker vloggers Brad Owen and Johnnie “Vibes” Moreno are co-hosting the Stairway To Millions Meet-Up Game on Tuesday, January 11, from 12-6 p.m. PT at the ARIA Resort & Casino poker room. Participants in the meet-up game will be eligible to be part of a special raffle giveaway awarding two $1,100 seats to the first Stairway To Millions tournament.