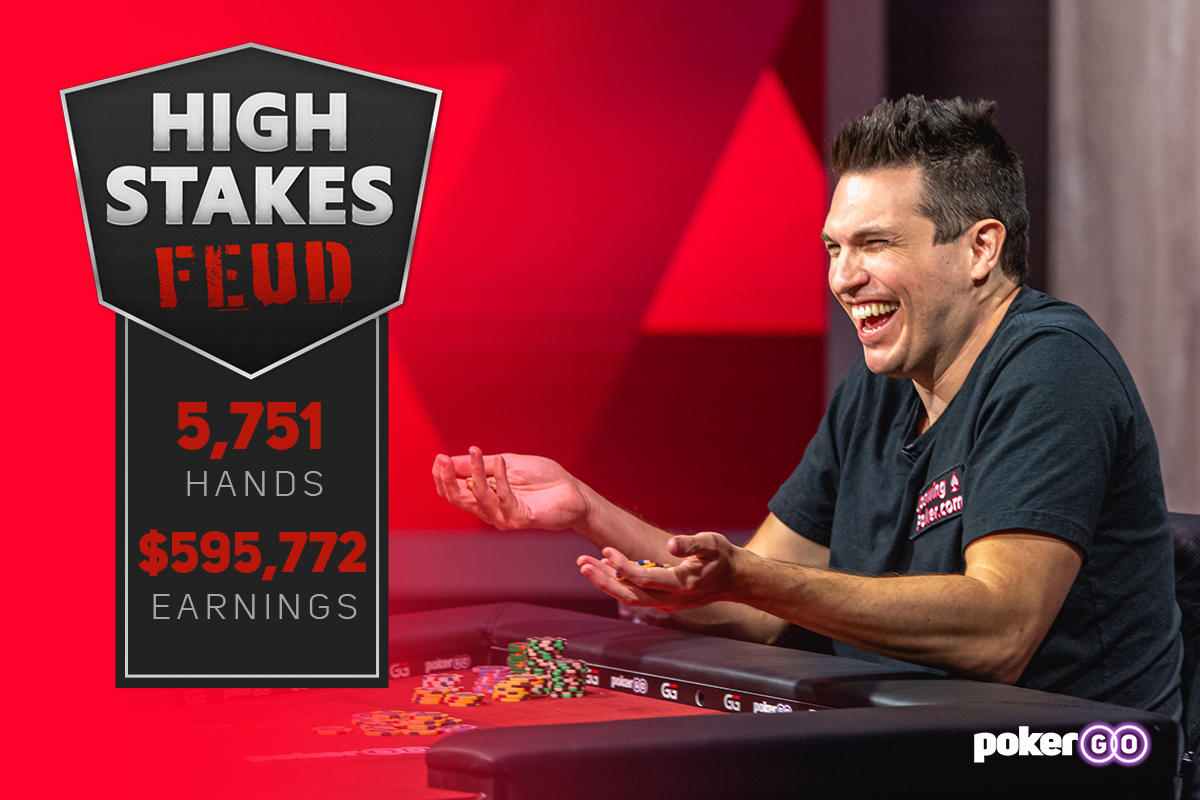 High Stakes Feud continued this week with Daniel Negreanu and Doug Polk playing five sessions throughout Thanksgiving week. Following 5,751 hands, Polk put together a string of winning sessions to hold a lead of $595,771.64 after an upswing of over $775,000 against Negreanu.

After the first 200 hands of High Stakes Feud were played from inside the PokerGO Studio, the match progressed to WSOP.com where Polk immediately eroded the $116,500 deficit that he had incurred in the first session. The next few sessions saw Negreanu retake the lead and hold a $222,832.70 advantage over Polk after 2,965 hands.

The eighth session of High Stakes Feud would see Negreanu collect the win of $24,156.82 from the 457-hand session that was lacking of major hands between the two. However, the next four sessions of play would swing the match considerably into Polk’s favor as he collected four huge wins including an eight buy-in winning session this past Saturday in session 12.

The ninth session began fairly timidly between both players before Negreanu bluffed with queen-high on the river and was picked off by Polk with top pair to see him move into a lead of roughly $35,000. However, Negreanu struck back when he flopped a set of sevens on Polk’s pocket kings to prompt a rebuy from Polk only to have Polk turn the tide on the other table when he won a roughly $110,000 pot with flush-over-flush. From there it would be Polk’s session as he won the majority of the big pots including flopping a set and improving to a rivered full house after Negreanu turned the nut straight as the session ended with Polk winning $205,521.74 after 377 hands.

Thanksgiving week began on Monday with Polk and Negreanu logging their tenth session which would inevitably be their longest at 852 hands and just over four hours. With Polk now back in the black, he immediately furthered his advantage by scooping in lots of small pots as his lead moved out to roughly $85,000. Negreanu would regain some momentum by finding a double when he called all-in on the river with two pair against Polk’s ten-high. Negreanu then secured another pot when he found value with pocket kings as he now held the lead, but it wouldn’t be for too long as Polk began his climb out of the red. Polk found a double when he rivered a full house against Negreanu’s nut straight and then continued to grind away as the session ended with Polk winning $117,624.38.

Wednesday would be the 11th session of High Stakes Feud and there would be no all-in pots between the two as the biggest pot was roughly $53,000 across the 416-hand session as Polk ended up winning $120,023.59. The 12th session played out on Saturday, and it would secure the biggest win for any player so far as Polk collected $332,178.14 in winnings over Negreanu in the 684-hand session.

Negreanu managed to claw away at his deficit as it dropped to roughly $200,000. before a string of pots went Polk’s way including the final hand that saw Negreanu all-in with pocket queens against Polk’s pocket eights. Polk turned a straight draw and rivered his set as Negreanu immediately quit the session which saw Polk finish Thanksgiving week nearly $600,000 in the black.

Monster session today. Hit everything. Every hero call went right. Every big bluff got through. Every runout gave me the nuts. Every all in went my way. This was the kind of session you dream about.

With 12 sessions now complete, 5,751 hands have been dealt of the 25,000-hand quota in High Stakes Feud. Polk holds a lead of $595,771.64 over Negreanu on the back of a near $800,000 upswing over the last four sessions as Poker Central will continue to provide weekly updates of all the High Stakes Feud action until a winner is crowned.