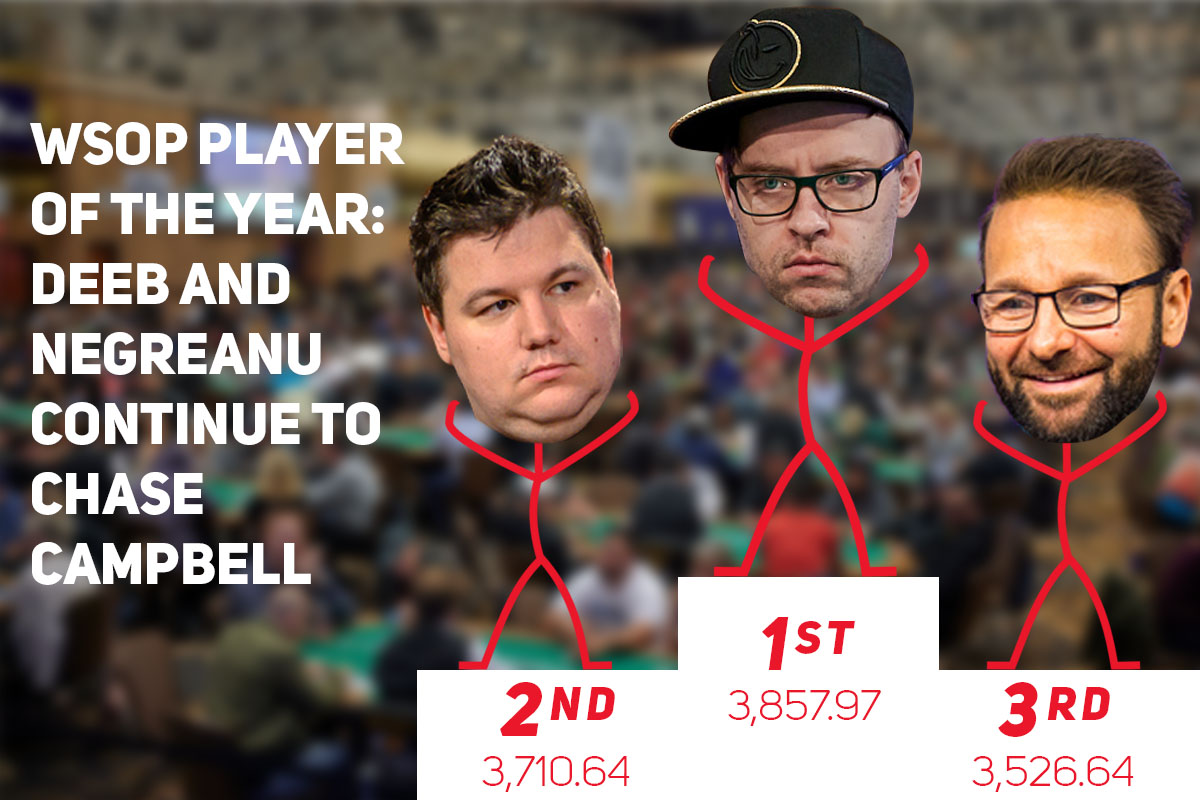 Shaun Deeb, Robert Campbell, and Daniel Negreanu are the three favorites for the World Series of Poker Player of the Year title.

Check out the schedule of Live Events on PokerGO as World Series of Poker Europe continues to stream until it’s epic conclusion next week.

Earlier this year, as the World Series of Poker in Las Vegas wrapped up Daniel Negreanu emerged with a late push and ever since it’s slowly becoming a three-horse race with the other contenders seeing their chances slowly fade.

At this point, the entire Top 10 could still technically win World Series of Poker Player of the Year but for most, it would take at least one outright win in one of the remaining six events to put themselves back in the race. From the Top 10, Jason Gooch and Dan Zack have not been spotted in Rozvadov while the others are duking it out in every event. The current standings are as follows.

The Top 3 is what we will pay most attention to in the coming days as World Series of Poker Europe continues to stream on PokerGO with the €25k High Roller Final Table set for Tuesday morning at 9:00 am ET. Robert Campbell, who’s back in the lead after a deep run in the €25k, has managed to get three cashes so far in Rozvadov with his best result being an eighth place in the aforementioned high roller. Prior to WSOPE getting underway, Campbell made it clear that he came to Rozvadov on a mission.

Shaun Deeb has recorded three cashes in Rozvadov to date as well, never finishing higher than 13th and for a total of €6,473 so far. Lastly, Negreanu has four cashes so far, falling just short of the final table in the €25,000 High Roller with a tenth place finish earlier today.

Due to good results so far in Rozvadoz, Anthony Zinno, Chris Ferguson, and Dario Sammartino are back into serious contention. Zinno recorded two cashes, Sammartino made the final table in the €25k Short Deck while Chris Ferguson is up to his usual serial cashing ways with three results to date.

Next up in Rozvadov at King’s Casino is the €25,000 Mixed Game Championship which will likely see all six aforementioned contenders in action. This small field has a chance to really shake up the rankings as its million euro guarantee is going to bring out players from all over the world.

Tomorrow, on Tuesday, the €2,200 Pot Limit Omaha event kicks off before the €100,000 Diamond High Roller starts on Wednesday followed by the €2,500 Short Deck event on Thursday. Heading into the weekend, the 2019 World Series of Poker Europe Main Event gets underway with two starting flights and the possibility for one re-entry. The final tables of each of these events can be found on PokerGO so don’t miss any of the action and subscribe right now.