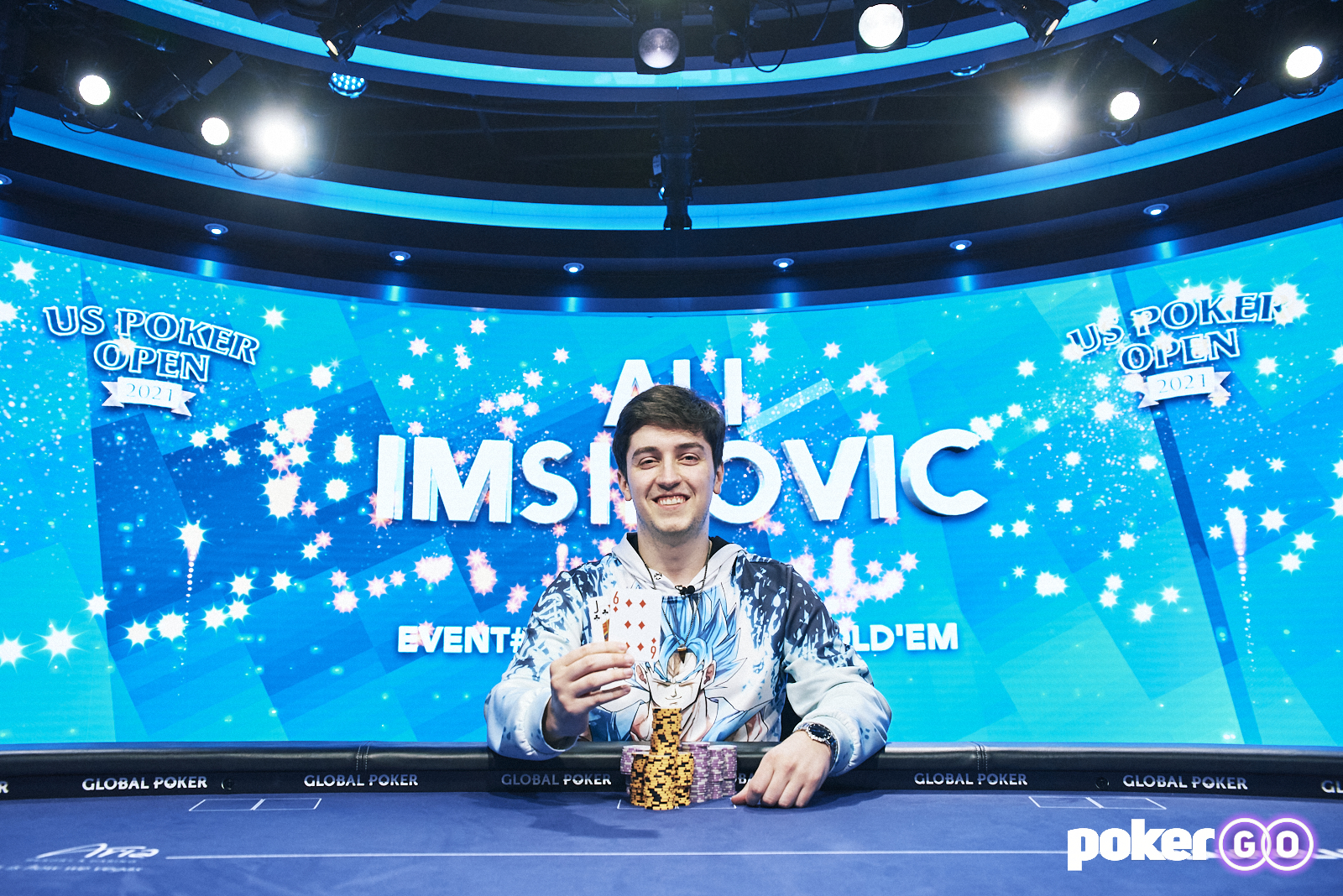 Ali Imsirovic has done it again! The former Poker Masters Purple Jacket winner and current PokerGO Tour leader took down Event #9 of the U.S. Poker Open in an impressive fashion to take a commanding lead on the overall standings. Unless anyone catches Imsirovic in the final three events he will receive the 54-lbs gold eagle trophy and $50,000 cash prize.

The first elimination happened quickly as Jake Schindler’s attempt to double up did not work out the way he wanted. Schindler raised to 435,000 leaving himself with 105,000 behind in the 50k big blind level with king-nine suited, and Cary Katz called with pocket sevens. The flop came down king high, giving Schindler top pair, and he moved all-in for his last few chips and Katz tossed in the call. The turn was the queen of diamonds, and Katz smiled and said, “Seven of clubs,” before the dealer put out that exact card! Schindler busted and Katz added to his stack.

The next player to bust was Thomas Winters. Katz raised to 215,000 at 60k big blind with ace-king and Winters moved all in for his final 470,000 with ace-three suited. Winters couldn’t catch up with Katz’s better ace who further closed the gap between him and chip leader Imsirovic.

Poker Hall of Fame member Erik Seidel hung around for quite some time but ultimately his day ended in fifth place. Seidel busted holding ace-queen versus Katz’s jacks for his final 16 big blinds bringing the field down to four players with Imsirovic in the lead and Vanessa Kade, Katz, and Lichtenberger sitting on similar stack sizes.

Vanessa Kade was the short stack during four-handed play and her final hand started with a min-raise to 200,000 off a 1.4 million stack. The action folded to Andrew Lichtenberger in the big blind and he moved all-in after which Kade called immediately holding king-queen of diamonds. Lichtenberger tabled ace-five and watched how Kade hit top pair on the flop. Kade had the lead going into the river but an ace ended her tournament run.

Finishing in third was Cary Katz who ran into the Imsirovic train. Imsirovic raised before the flop and got called by Katz in the big blind with nine-three suited. The flop came down queen-nine-three with two clubs giving Imsirovic top pair with queen-jack of hearts. Katz had a good sweat with his pair and flush draw but he couldn’t find a way to double up.

On the final hand, Lichtenberger moved all in with king-jack and Imsirovic hesitated before calling with jack-six offsuit for seven big blinds. Imsirovic laughed as a six hit the turn for him to take the lead. The river blanked and Imsirovic was crowned champion and with that, he takes the US Poker Open Championship lead!

The 2021 U.S. Poker Open continues right now as Event #10: $10,000 No Limit Hold’em is in full swing. Check out our Live Reporting right here and tune into the final table of that event at 1:00 pm PT on PokerGO. Here are the Top 10 of the Championship Standings.