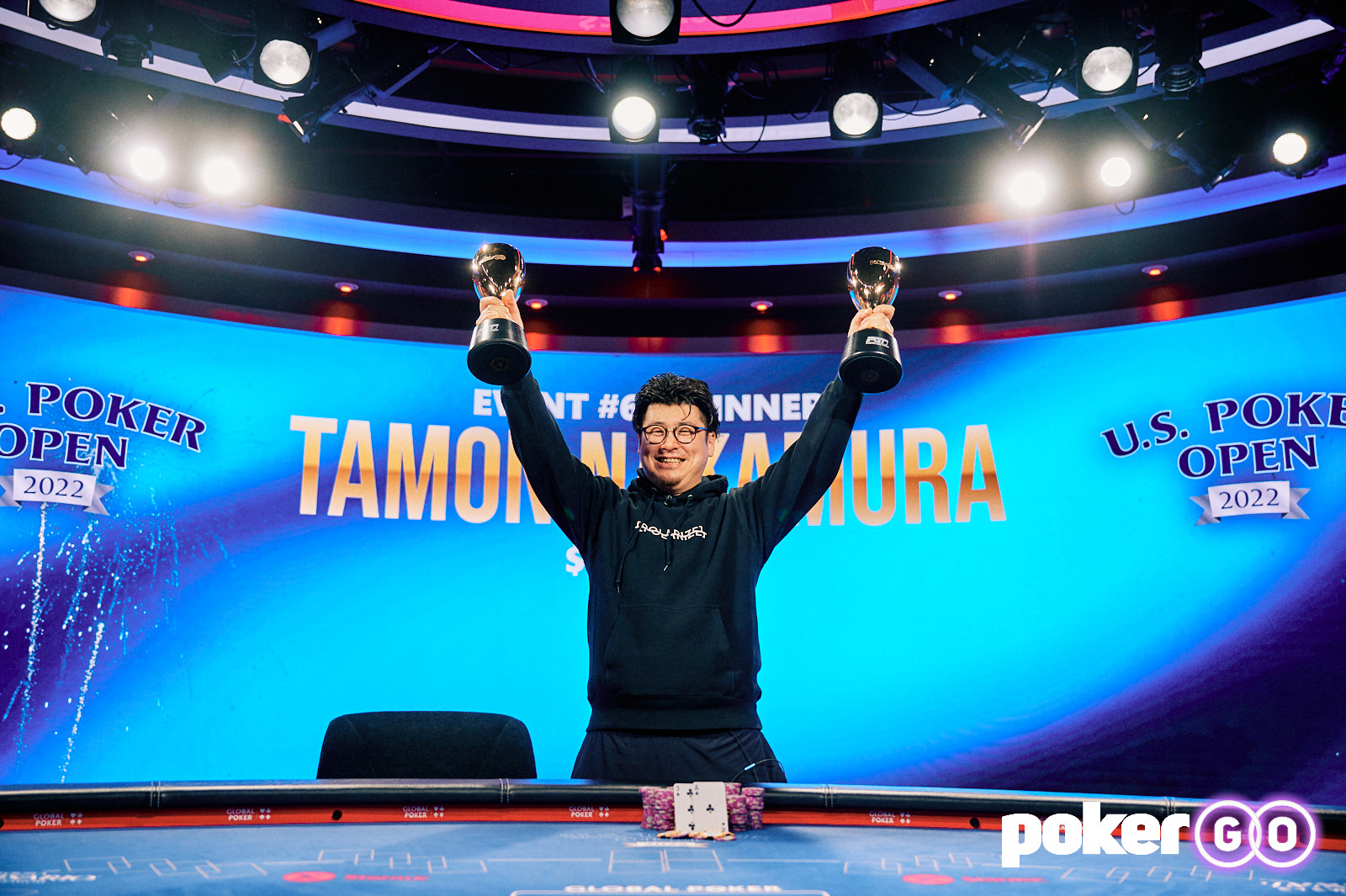 In addition to picking up his second win of the 2022 USPO, Nakamura vaulted himself into the top 10 of Japan’s all-time money list according to HendonMob.com. Prior to 2022, Nakamura had a total of $372,317 in live tournament winnings. He’s won $460,900 at the 2022 U.S. Poker Open alone in what is truly a breakout performance for the self-proclaimed mixed-game player from Japan.

The 47-entrant field in Event #6: $15,000 8-Game created a prize pool of $705,000 and paid the top seven finishers. Maxx Coleman fell in eighth place when Yu’s superior flush bested his flush in a hand of stud hi-low.

Nakamura’s Road To Victory in Event #6

Tamon Nakamura came into the day seventh in chips and was down to his last 165,000 early before he found a double through Scott Seiver playing razz during 60,000-120,000 limits. Nakamura made a seven on sixth street to leave Seiver drawing dead before seventh. Even though he doubled, Nakamura was still the short stack at the table with 405,000.

Turning the page to limit hold’em, Jeremy Ausmus would be the first to head out the door when his king-jack of diamonds ran into the pocket queens of Ben Yu. The flop of jack-eight-seven with two diamonds hit the felt and gave Ausmus a pair and the flush draw, but when the board ran out with the eight of spades on the turn and the five of hearts on the river, Ausmus walked out the door in seventh place for $28,200.

Nakamura would then find his second double of the final table when his ace-queen ran down the pocket eights of Bryan Micon. An ace on the turn secured the double to 710,000.

Limit hold’em at 40,000-80,000 would also see Seiver’s downfall when he three-bet ace-king from the small blind against the ace-ten of Damjan Radanov. The flop fell ten-nine-two and Radanov check-called a continuation bet from Seiver. Another ten on the turn would see Radanov check-raise Seiver all in, and when the New York native made the call, he was drawing dead before the river hit the felt. Seiver took home $42,300 for his sixth-place finish.

From there, it was a battle of attrition as the remaining five players battled through 10 different double-ups over a near three-hour period before Radanov got in his last 300,000 at the 75,000-150,000 level holding the ace-queen-jack-ten in a hand of Omaha hi-low. Yu three-bet to 450,000 holding the ace-ace-six-six on the button and Phil Hellmuth came along with the ace-king-five-four from the big blind. The board ran out king-seven-five-two-eight with three spades, and Hellmuth made the nut flush and an ace-four low to scoop the pot and eliminate Radanov in fifth place for $56,400. The pot also gave Hellmuth the chip lead.

in the small blind. The board ran out

Two hands later, Yu was all in from the small blind for his last 950,000, holding the jack-nine against the pocket fives of Nakamura in the big blind. The board ran out king-ten-two-nine-five. Although Yu had turned a pair of nines, Nakamura rivered a set of fives to eliminate Yu in third place for $105,750 and set the stage for the heads-up battle with Hellmuth.

The final hand saw Nakamura open the button with ace-three of clubs and Hellmuth three-bet all-in with king-seven. Nakamura called and the board ran out clean for his hand. Nakamura successfully completed the ascent from worst to first and sent Hellmuth home with a $155,100 second-place prize.

With his second win of the series, Tamon Nakamura moved into a sizable lead in the race for the 2022 U.S. Poker Open Golden Eagle Trophy and $50,000 Championship Bonus. He sits at 462 points and is more than 100 points clear of second-place Jeremy Ausmus, who finished in seventh place to bring his point total up to 333. Ausmus has cashed the last four events in a row. Rounding out the top five are Shannon Shorr in third with 302 points, Ren Lin in fourth with 235 points, and Adam Hendrix in fifth with 234 points.

Phil Hellmuth, meanwhile, jumps into the top 10 on the leaderboard with his second-place finish in Event #6 and currently sits at 174 points.

No Change On the PGT Leaderboard

The top of the PGT leaderboard remains unchanged, as none of the top 10 finished in the money in Event #6. But with the win, Tamon Nakamura jumped into the top 21 and currently sits in 17th place, knocking Darren Elias out of the top 21 spots.

At the end of the season, the top 21 point earners on the PGT leaderboard will compete in a winner-take-all freeroll for $500,000 in prize money. Click here to view the complete PGT leaderboard.